Unlike Nolan Finley, we went out to talk with them 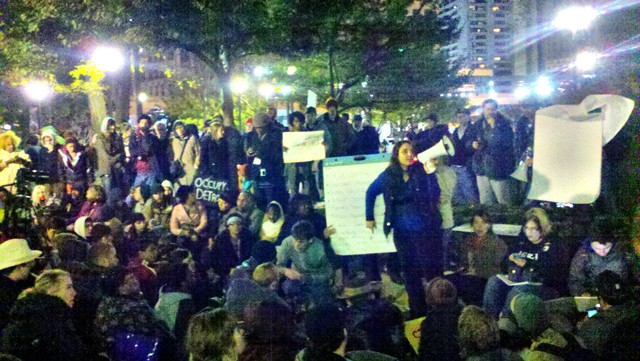 Although we don't know any of them personally, we do know who the 1 percent are. They are the people on the top rung of America's economic ladder.

We were given a snapshot of just how much better off that 1 percent is than the rest of us in an article by Nobel Prize-winning economist Joseph E. Stiglitz in the May issue of Vanity Fair magazine.

"It's no use pretending that what has obviously happened has not in fact happened," he wrote. "The upper 1 percent of Americans are now taking in nearly a quarter of the nation's income every year. In terms of wealth rather than income, the top 1 percent control 40 percent. Their lot in life has improved considerably. Twenty-five years ago, the corresponding figures were 12 percent and 33 percent. One response might be to celebrate the ingenuity and drive that brought good fortune to these people, and to contend that a rising tide lifts all boats. That response would be misguided. While the top 1 percent have seen their incomes rise 18 percent over the past decade, those in the middle have actually seen their incomes fall. For men with only high-school degrees, the decline has been precipitous —12 percent in the last quarter-century alone."

Which brings us to the other 99 percent, which has become a rallying cry for the Occupy Wall Street movement that made its way to Detroit last week.

Of course, that 99 percent is far from united. On the far right you have the Tea Party movement, which may have 99 percenters as its foot soldiers, but is being bankrolled by 1 percenters such as the billionaire Koch Brothers, who have never met either an environmental regulation or a tax of any sort that they liked.

And then there is the vast middle, much of which has been too battered and bewildered to know exactly why it is that their jobs are disappearing and their homes are being foreclosed on and they can no longer afford to send their kids to college.

But they are beginning to come together. We can say that with some certainty because, unlike The Detroit News' blowhard-in-chief Nolan Finley, we went out to talk with them on Friday when they gathered near the Spirit of Detroit for a march down Woodward.

The dailies placed the number of protesters at around 500. We'd say there were easily two to four times that many people, at least at its peak.

And what struck us more than anything was how diverse a group it was. Retirees and students, besieged public workers and struggling business people. People of all colors, from the city and suburbs alike.

We met, for example, Frank Cusumano, a lawyer in his 40s from Macomb Township. A self-described Republican, Cusumano says he's a supporter of Rep. Ron Paul, a Texas Republican with a libertarian bent who's trying to win his party's presidential nomination.

Cusumano even admitted to having attended a Tea Party rally or two. But what brought him out Friday was anger over the bank bailouts that followed the economic meltdown.

What we've witnessed, he says, is the "collapse of the middle class." As for talk that the left is attempting to wage class warfare, he says that war is already well under way, and that the poor and middle class are already suffering as a result.

Occupy Wall Street is just the first sign that those who have been taking all the hits are beginning to try to fight back in a serious way.

There were others, too, who we spoke to who belie this as just a movement of struggling students and the unemployed — although you will find plenty of both camping out in the tent city that has sprung up in Grand Circus Park.

We went over there on Monday, where we ran into Justin Laskos, 21. He was helping to man a makeshift kitchen set up under tarps. Donations of food and supplies are streaming in, he says. We counted about 50 tents.

"Being part of this," he says, "is an exhilarating experience."

And then try to find a reason to believe that things are going to get better without some sort of mass movement like the one that is taking shape before our eyes.