Occupy on the move 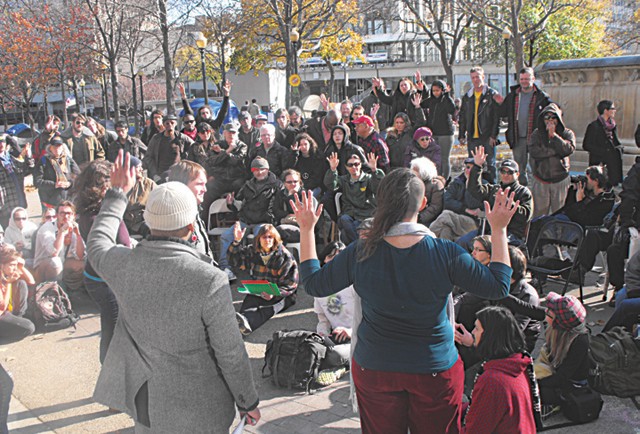 "Consensus is a beautiful thing, but it can be a little messy."

That statement was made by a young woman named Emma last Saturday as participants in the Occupy Detroit movement gathered in Grand Circus Park to discuss where they go from here — both physically and conceptually.

The immediate issue people were trying to deal with involved a city-issued permit allowing protestors to maintain a camp in the park through Monday. As we went to press, it appeared that the Detroit Police Department had backed away from a hard-line stance requiring protestors to be out of the park by the time the permit expired.

On Saturday, a letter signed by Detroit Police Chief Ralph Godbee Jr. and Recreation Department Director Alicia C. Minter was hand-delivered to John Royal, president of the local chapter of the National Lawyers Guild. The left-leaning NLG has been providing legal assistance to the Occupy Detroit movement.

The letter noted that the permit would expire at 11:59 p.m. on Monday, Nov. 14, and that there would be no extension. Moreover, the letter implies that, along with misdemeanor charges, anyone refusing the lawful order to vacate the park could be subject to felony obstruction charges punishable by up to two years in prison and/or a fine of $2,000.

An unexpected twist was thrown into the mix when occupiers, along with Julie Hurwitz, another NLG attorney, showed up at a meeting of the City Council's Public Health and Safety Committee. During that meeting, attorney David Whitaker, director of the council's Research & Analysis Division, told the committee that the permit issued by the city's Recreation Department isn't valid because the matter should have gone before City Council for final approval.

"I have concerns with the whole way this took place," Councilmember Brenda Jones said.

The bigger issue, though, was that council, because of procedural requirements, couldn't take official action to grant the protestors more time in the park until Tuesday. That meant people could still be subject to arrest once the clock struck midnight.

That concern appeared to be put to rest early Monday afternoon when Deputy Police Chief James Tolbert, responding to a question from Council President Charles Pugh, promised that there would be "no mass arrests tonight."

It also looked as if the council was poised to give protestors some additional time — possibly as long as two weeks — to tear down the camp, clean up the park and relocate to a privately owned storefront on Michigan Avenue in Southwest Detroit. That issue was set to be decided Tuesday, after this rag goes to press.

Part of the overarching message coming from police, council members and the protestors themselves is that the situation here in Detroit has been a model of cooperation, especially when compared to the violence and harassment of protestors that has taken place in some other cities where the occupy movement has also taken root.

"It has been a co-respectful relationship," is the way Pugh described the situation.

In fact, according to Hurwitz, one of the impediments to breaking camp was figuring out what to do with the homeless people she said the Detroit P.D. have been regularly dropping off at Grand Circus Park, where occupiers had set up a kitchen serving three meals a day to anyone who wanted food.

(Asked about that, Tolbert said he didn't know if that was happening and said he intended to check into it.)

With the threat of immediate arrest apparently past, and the offer of a storefront providing the group a base of operations in hand, the question remains of where the Occupy Detroit protest — part of the wider Occupy Wall Street movement — goes from here.

Issues surrounding the movement's next step were vigorously debated during a so-called "general assembly" attended by about 100 people at the park on Saturday.

Some advocated foregoing the attempt to seek the city council's permission to give official sanction to an extension in order to prompt a confrontation with authorities.

"We should hold this space," said one of the speakers. "We hold our ground. We assert our power — the power of the people."

The importance of having a high-visibility encampment such as the one at Grand Circus Park was also pointed out.

Others, however, pointed to what is an obvious practical consideration: Winter is coming, and maintaining an encampment once the weather turns frigid simply isn't feasible.

Giving up the camp doesn't mean giving up the struggle. Along with setting up a base of operations at the privately owned building in southwest Detroit, many at Saturday's assembly showed support (by raising their hands in the air and wiggling their fingers) for occupying a vacant building "without being invited." Others advocated using the movement to help resist the eviction of people losing their homes to foreclosure, and to occupying some of the countless houses throughout Detroit that are vacant.

As Emma said, making decisions by achieving consensus can be messy business. What's apparent, though, is that the tents at Grand Circus Park are almost certainly going to be gone soon, but the Occupy Detroit movement is just beginning to find its way.