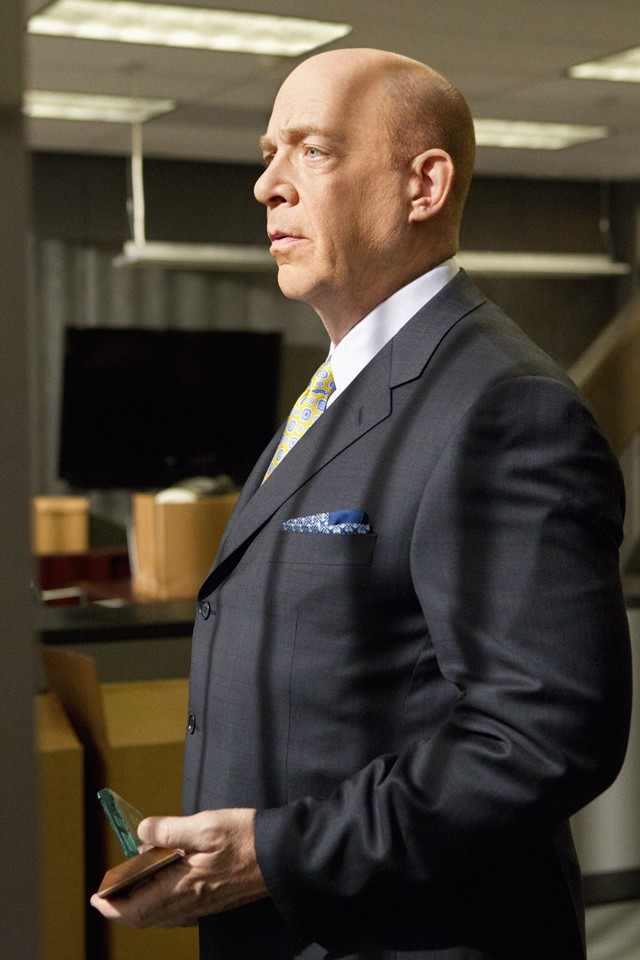 The most successful cable series of all time, The Closer, begins its seventh and final season at 9 p.m. Monday on TNT, preceded by a nine-hour marathon of choice episodes from Season 6. Its Emmy-winning star, Kyra Sedgwick — who is only one degree of separation from Kevin Bacon — felt she needed to stretch her creative wings beyond quirky L.A. Deputy Chief Brenda Leigh Johnson in a weekly police procedural, even one as excellently written as The Closer, and go out while the series is still at a high level.

Unfortunately, that means the entire ensemble cast has to go out with her.

For metro Detroit native J.K. Simmons, who has played the yin to Brenda's yang as Assistant Police Chief Will Pope since the fifth minute of The Closer's first episode, the decision triggered mixed reactions.

"The cast and most of the crew have been together for seven years now, and it's a big part of our lives," Simmons, 56, says. "Obviously, being on a hit show is a great thing. It's the goal for a lot of actors. But being on a hit show that's not a happy place to show up and work every day can be its own special kind of purgatory."

He knows whereof he speaks. Over the past two decades, Jonathan Kimble Simmons has been a seminal performer on some of the most acclaimed series in TV history. In addition to The Closer, you may know him as sympathetic police psychiatrist Dr. Emil Skoda in Law & Order and its spinoffs SVU and Criminal Intent, or as terrifying neo-Nazi inmate Vern Schillinger in the landmark '90s HBO prison drama Oz.

"Oftentimes," Simmons relates, "we get guest stars coming in on The Closer who say after a day or two, 'Wow, man, this is fun! You people don't hate each other and the scripts are good! I just did a guest spot on blah-blah-blah series last week and it was miserable!' A huge part of having a happy life out here [in L.A.] is just liking where you go to work."

Simmons recalls a happy life growing up in Grosse Pointe Farms, in an anomalous 1,500-square-foot house with his parents and two siblings. He lived here until the age of 10, when his father, a career educator, moved the family to Columbus, Ohio, to accept a faculty position at Ohio State. A devoted Detroit Tigers fan — he played the team's manager in the 1999 Sam Raimi film For Love of the Game — when the Tigers traveled to Dodger Stadium last month for an interleague series, "I'm shooting e-mails back and forth with Tyson Steele, the [Tigers] clubhouse guy, and I and my son [Joe, 12] and half the Little League team got to go down on the field and hang out with the players," Simmons gushes. "That's one of my favorite perks of semi-stardom."

Monday's Closer return — a particularly distinctive episode if you enjoy rap videos — suggests a new twist in Pope's relationship as boss and protector for Brenda Leigh may be quickly taking place. "The saga of Assistant Chief Will Pope and the LAPD is to be continued in Season 7, and that's all I can say for now," Simmons teases. The future of controversial LAPD Chief Tommy Delk, portrayed by fellow Detroit native Courtney B. Vance, also will be foreshadowed in Monday's return.

Simmons, one of Hollywood's most in-demand character actors, says he was more shocked by NBC's cancellation of Law & Order for the 2011-12 season. "That was a complete surprise, because I hadn't done the show for a few years and then this past fall they called," he says. "Last year I did three episodes, including what turned out to be the very last episode.

"At the time, Epatha [S. Epatha Merkerson, who played Lt. Anita Van Buren on L&O for 17 years and, as a Wayne State alum, also shares Detroit ties] was going to leave anyway. She had been there forever and was ready to move on. But everybody else was saying, 'Well, we haven't gotten the official call yet, but we're pretty sure we'll be back next year.' They were thinking it was going to go on at least one more season and break the Gunsmoke record [for longevity]. I never waste too much mental energy trying to figure out why networks do what they do, but obviously it was one of the most iconic shows in TV history and spawned all those spinoffs. It was huge in my career even though I was never a regular on the show. It was always a really nice place to go to work."

Ironically, during Oz's six seasons, he was playing the gentle shrink and the violent white supremacist at the same time. "You could walk from where Law & Order was being shot to the warehouse where Oz was filming, so there were literally days when I would shoot Oz in the morning and Law & Order in the afternoon," he says. "I used to say I play the psycho and the psychiatrist."

Now The Closer is going away too, but sing no sad songs for Simmons. He has three new movies coming out in the next year, will be the voice of J. Jonah Jameson, his character from the Spider-Man movies, for the upcoming animated series Ultimate Spider-Man, and gets recognized on the street now as Professor Nathaniel Burke in the Farmers Insurance commercial campaign. "I must say, it is a little weird after all the different things I've done to have people come up and say, 'I love your commercials!'" Simmons admits. "My actor ego kind of gets my bristles up and I want to say, 'Hey, man, I did Shakespeare, for cryin' out loud! I've been on Broadway!'"

There may be good news for the rest of The Closer cast as well. TNT added six episodes to its usual 15-episode order so that fresh Closer episodes could air next spring leading up to the premiere of the spinoff series Major Crimes, revolving around Mary McDonnell as Brenda Leigh's insufferable adversary, Capt. Sharon Raydor. Everybody's favorite Closer character, G.W. Bailey's Lt. Provenza, may survive after all!

Live by the sword... : Chris Hansen, the Dateline NBC "To Catch a Predator" newshound and former Channel 4 reporter who has trapped countless perverts and scam artists through the use of hidden cameras, may have fallen victim to his own video trickery.

Numerous media outlets are reporting that Hansen, 51 and the married father of two, was caught on tape in a sting arranged by the National Enquirer having an illicit affair with a Florida TV reporter named Kristyn Caddell, 20 years his junior. Hansen, who was ostensibly in south Florida to research an investigative story, was captured by secret cameras having a romantic dinner with Caddell at a Ritz-Carlton hotel, stopping at a liquor store, then accompanying her back to her Palm Beach apartment.

Oh, the irony! There are more layers of this tale to be peeled away, for sure, but here's hoping Hansen's wife, Mary, isn't ready to borrow his signature "Predator" tagline: You're free to go.