Two new restaurants from the owners of the former Cafe Ollie in Depot Town will start serving today and hold a grand opening on Friday during the citywide First Friday art walk.

Mark and Danielle Teachout shut down the Michgan-centric cafe in February and renovated the space into a unique concept for Ypsi - a full service, chill-vibe craft cocktail bar and seasonal menu restaurant simply called Ollie.

At the same time, they leased the neighboring space and built out a new bakery/café called Cream and Crumb, which is a totally separate business.

At Ollie, the Teachouts brought in chef Travis Schuster (formerly of Ann Arbor’s Spencer and the Corner Brewery) to design the menu and run the kitchen. 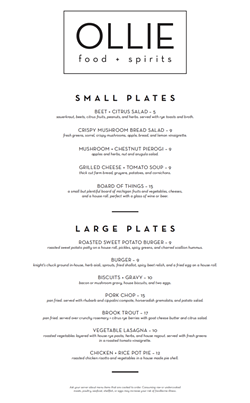 Like Cafe Ollie, Ollie is focusing on local foods, though Schuster previously told MT “not just in sourcing, but in inspiration. I want to focus on the comfort food of our eastern heartland region."

A good plate to check out on the first menu is the brook trout, which is served over crunchy rosemary and citrus rye berries, and along with goat cheese butter and a citrus salad. Or try the beet and citrus salad small plate with sauerkraut, beets, citrus fruits, peanuts, and herbs. It's served with rye toasts and broth.

At the bar, look into the Victoria Newell's Gin & Tonic, a drink named after the ghost who supposedly haunts the building housing Ollie. The story goes that Josiah Newell built it the 1820s, and his daughter was run over and killed by a horse drawn carriage when she ran out of the building to meet him at the nearby train stop.

And those who have favorites on Café Ollie’s menu need not fret: Many of the breakfast and lunch dishes, the award-winning mac and cheese, and the sandwiches carried over to Ollie's lunch menu, though Schuster says he’s ditching the processed vegan items for whole-ingredient fare. Ollie will also host a brunch each week, though the menu will frequently change.

Next door, at the 25-seat Cream and Crumb, Danielle Teachout is trading in doughnuts, scones, muffins, deserts. Some items are made in house, while others are purchased from local bakers like Zingerman's. Hyperion provides the beans, including a cold brew on tap, while Cream and Crumb scoops Guernsey ice cream.

The Ollie website is here. Find Cream and Crumb here.