On Macklemore and that "White Privilege" song, and also why Eminem is so much better: A rant 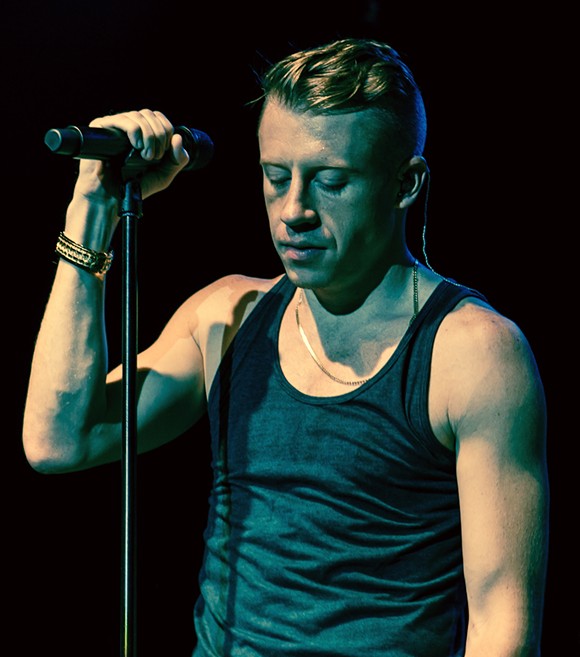 When The Slim Shady LP came out in 1999, Eminem was vaulted into the hip-hop world as one of the most promising up-and-comers, and there is no doubt that he is. He was an angst-ridden white dude from Detroit who rapped with such ferocity that most people were either scared or highly intrigued. He wrote lyrics about addiction, his fucked up family, and stuff that flat-out pissed him off. He went on to sell millions of records and is named on Rolling Stone's Best 100 Artists of All Time. Cue 2012 and another white rapper hits the scene, a gangly dude named Macklemore from Seattle. You may have heard of him. Last Friday, he released a new song entitled “White Privilege II," an eight-minute track where he defends himself from critics and justifies why he makes his art.

Let's take a closer look to why Eminem thrives as a white rapper, but Macklemore is a piece of shit.

In a 2002 article in The New York Times, the reporter says that Eminem was “a salvation of an art form that has been corrupted by the focus of Bentleys, yachts, and Cristal Champagne.” You never saw Eminem appropriating black culture. Yes, the style of his music is prominently made and created by black artists, but Eminem is never trying to be someone that he’s not. Eminem writes lyrics about the struggles that ordinary people deal with on a daily basis: addiction, divorce, parents, regrets, the list goes on and on. Plus, if you’ve ever watched 8 Mile you know that Eminem had a hard childhood. He had a shitty mother and lived close to poverty until he made it big. That’s what makes him so relatable. Teenagers growing up in the suburbs loved his music and so did those growing up in the city. Everyone could relate on some level.

At the same time, there is no doubt that Eminem has had so much success because of his race. In the same New York Times article, Eminem addresses his privilege in “White America” rapping, “Let’s do the math — if I was black, I would’ve sold half”, pointing out his album sales compared to black rappers. He is completely self-aware of his privilege, but he’s also aware that he’s talented and is actually making great music.

Then there is Macklemore. Sweet, foolishly dumb, Macklemore. When he first came out with “Thrift Shop” in 2012, it was catchy as hell and over-played like most radio hits. Macklemore raps about how he enjoys buying clothes from Goodwill because they are stylish and cheap. That is great, but Macklemore is a platinum-selling hip-hop artist who can afford to buy that Gucci T-shirt that costs $50. The entire song was a smack in the face to the population of the world who shops at Goodwill because that is all they can afford. He even deepens his voice down during the song as he refers to himself as a "cold-ass honky" (I know — this really was all the radio four years ago). Then, there was that tasteless Instagram post where he showed a texting conversation between himself and Kendrick Lamar after Macklemore undeservedly beat him for Best Rap Album at The Grammys.

Now, we have “White Privilege II,” one mess of a song where Macklemore tries to check his own white privilege while calling out other white artists like Iggy Azalea and Miley Cyrus who are often heavily criticized for appropriating black culture. Pitchfork brilliantly points out that, “this song puts Macklemore in the conversation about Black lives mattering and — due to very same white privilege he’s wrestling with in this song — he’s going to get an inordinate amount of attention for speaking out.” It’s not that Macklemore doesn’t seem sincere in the song, but his intentions are misguided. When artists like Kendrick Lamar write lyrics about social injustice against black people, there is barely a pull or a conversation. Yes, To Pimp A Butterfly was at the top of almost every music blog’s ‘Best of 2015’ list, but when Macklemore does the same thing, hundreds of think pieces are published on the Internet (this one included) and he wins all the Grammys.

This song also just makes Macklemore seem sad and desperate. Do we even care about what Macklemore has to say anymore? I know I sure don’t! Macklemore loves to put himself in the experience of others and makes songs about their struggle, not his own, and then he reaps the benefits. “Same Love” was a huge success for Macklemore and there isn’t any doubt that it has a great message, but at the end of the day, Macklemore is getting the paycheck for a song about something he knows nothing about.

I don’t think Macklemore is being malicious, or racist, or homophobic. The guy marched with people in Ferguson and clearly cares; he just needs to stop. Macklemore, we get it. You love everyone and want the best for everyone. So do most people under the age of 40. So please start making music about you. Your song about your daughter? Fantastic! That’s why we love Eminem as an artist! His songwriting is about his experience and hip-hop just happens to be his medium of expressing himself. Take a note out of Marshall Mathers’ book and lose yourself.