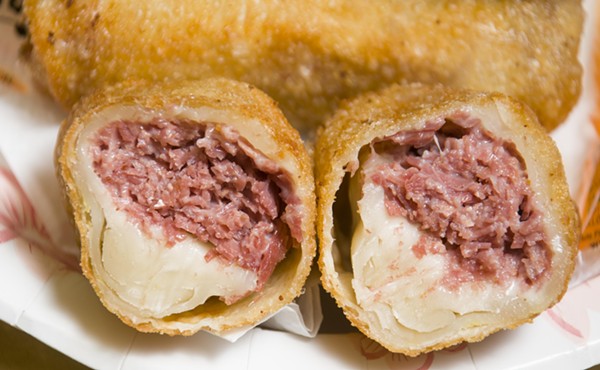 That's the question at the heart of an effort by Detroit's Green Acres neighborhood to thwart plans for a new Asian Corned Beef restaurant in the vacant building that formerly housed Stanley's Other Place. The property in question sits on the south side of Eight Mile Road just west of Woodward Avenue and abuts Green Acres.

In a front-page call-to-action in the August Greenacres-Woodward Civic Association News newsletter, Nick Lessnau outlined the association's concerns with the plans. Essentially, he contends the new ACB will be a nuisance to the neighborhood, will drag down property values, and doesn't conform to the city's zoning laws. He voiced concerns about the overflow of "litter, noise, and stench."

"This is an important issue that requires the attention of everyone within our community," wrote Lessnau, who is chair of the association's Stanley's Property Land Use Committee. "We must continue to preserve what we have left so that it can be enjoyed for many years to come."

For the uninitiated, ACB is the Asian corned beef egg roll purveyor that invented the dish. Its founder, Kim White, did so in 1978, and her son is in the process of growing ACB into a popular city chain. The company is now up to five shops with more planned, while restaurants like Mr. FoFo's, Lou's, Al's Famous Deli, Zeke's, Bread Basket, and more are now serving their own takes on the corned beef egg roll.

The dish's name doesn't deceive — Detroit's corned beef chefs fold an egg roll wrapper around a small pile of razor-thin corned beef, then dips the package into a deep fryer until it is crisp. In its original form, the cured meat is accompanied by gooey, white cheese like mozzarella or Swiss. Each restaurant offers variations; some are stuffed with cabbage, ground beef, or steak. The dish is not quite at coney dog status, but it could be argued that it's on its way.

So why does the Green Acres association view the deep-fried salt and fat bombs with trepidation? According to the Greenacres-Woodward Civic Association News, next location in the former Stanley's at 2411 W. Eight Mile Rd. will function as a commissary for ACB's other locations and a carryout location. Lessnau characterizes ACB as "adverse economic development," for reasons he notes in his piece (underlines are his):

• "The litter, noise, and stench that are associated with high-volume/carryout restaurants, all of which will overflow into our neighborhood."
• "Negative impact on home values."
• "Hours of operation and hours of food/supplies deliveries."
• "The property is less than 100 feet from homes of families that include children and the elderly."
• "Increased traffic through residential streets, where children live and play."
• "The property is zoned R5 Medium Density Residential which does not support a carryout restaurant (See Division 6 of the Detroit Zoning Ordinance for by-right and conditional uses.)"
Lessnau declined to elaborate when contacted by Metro Times, and ACB owner Hasan White didn't return requests for comment.

Are corned beef egg rolls really that much of a nuisance? ACB made headlines last year for a late-night brawl caught on video, and some on social media have questioned its promo video featuring busty ladies lusting over the egg roll's size. But one could argue that a fight can break out at just about any establishment. Mr. FoFo's on Livernois that borders Green Acre's western perimeter also sells corned beef egg rolls, yet the neighborhood doesn't seem to suffer. There are also multiple other high-volume dine-in and carryout restaurants in the area.

It's also worth asking if there are socioeconomic factors at play, and one could argue there are elements of classism in the debate. ACB's other shops largely serve a black customer base in poorer neighborhoods. The proposed new ACB location is sandwiched between Ferndale/Oakland County and one of Detroit's wealthier neighborhoods — Green Acres. Green Acres is a politically active neighborhood with a history of weighing in on nearby developments, so it's no real surprise that the association has an opinion about ACB.

Green Acres resident Oona Friedland, who is not a part of the association, tells Metro Times she's "concerned about the stench and the large volume of traffic that would be cutting through a residential area" where she says people already drive recklessly despite children playing in the street.

Indeed, the Greenacres-Woodward Civic Association may have a case against ACB with the zoning. We've reached out to the city planning department for comment and have yet to hear back. We'll update the story when more information is available.

Asian Corned Beef 2A from Marvin Burns on Vimeo.