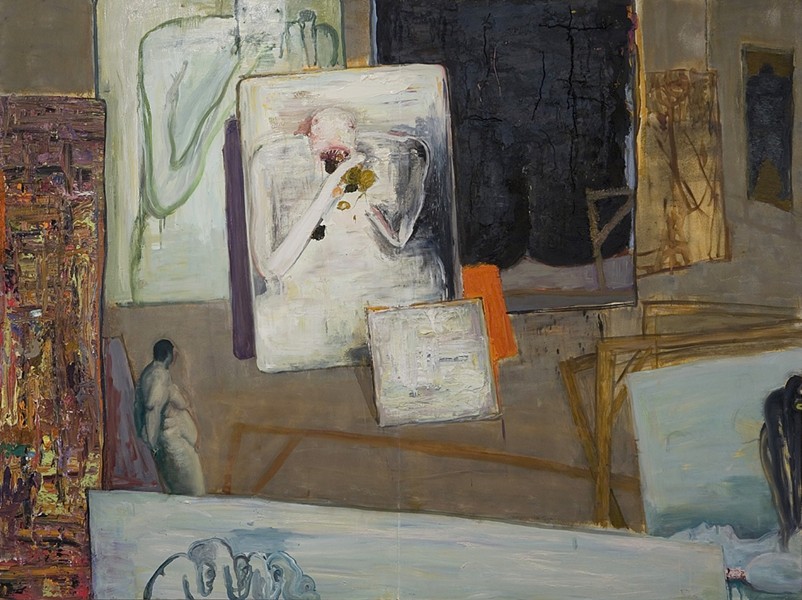 It's an unseasonably warm November day, and artist Brenda Goodman is enjoying the view from her home in upstate New York. "The sun is shining. I'm looking at mountains and the blue sky," she tells us by phone. "I'm taking it in before I head to Detroit."

It's a world away from the other environments she's used to. Previously, the house served as a summer home while she lived in a loft in New York City's Bowery District. For decades, Goodman lived and worked in the city, establishing herself as painter with a unique visual language. But before the Bowery, Goodman cut her teeth among one of the numerous artists who inhabited Detroit's infamous Cass Corridor during its countercultural heydey.

While more likely associated with Detroit's upscale redevelopment these days, in another life "the Corridor" was better known as a rough-and-tumble haven for the city's creative types, who were attracted by the low rents left in the wake of Detroit's mass exodus. It was, in the minds of many scholars, a singular moment in Detroit art history.

"You know, you have those moments, and they're moments that sort of just magically happen, and they don't ever happen quite like that again," Goodman, now 72, says. "We were just in the right place at the right time." (Case in point: Goodman says that in the '60s her studio cost her just $50 a month.)

But what made the Corridor what it was, Goodman says, was the prevailing sense of camaraderie among the artists, who worked across a variety of disciplines. The former Willis Gallery served as a hub for many of them, hosting art shows and poetry readings. "The writers and the poets and the painters were all one happy little family," she says. (Since closing, the building now houses Avalon Bakery, which arguably ushered in Midtown's current incarnation.)

By her own measure, Goodman and her introspective paintings were the anomaly in a scene in which her contemporaries were more apt to be making assemblages out of post-post-industrial detritus — occasionally shooting bullets through them in the case of Michael Luchs, or burning them in the case of Gordon Newton.

But Goodman's work does share some of the Corridor's fascination with the grotesque and the unrefined. Recently, critic John Yau has drawn comparisons with her work to artists like Hieronymus Bosch and Francisco de Goya, noting Goodman's paintings "made it viscerally evident that she believed the monstrous was everywhere, including in herself."

"A lot of my work at that time was connected to surrealism and it was very personal. It was like a visual diary," Goodman says. "So mine stood out in a certain way. But we all had our own journeys."

Throughout Goodman's work, there is no signature style. Goodman says that early on she began to eschew the traditional, representational education she obtained at the Society of Arts and Crafts for the more symbolic method of image making. Her eureka moment came when she met Faye Kicknosway, a well-known poet at the time. "She was teaching creative writing at Wayne State, and I started taking classes from her because I wanted my work to get more personal," Goodman says. "I started creating these symbols for myself and people in my life. For years, I worked with these symbols, and it was very exciting because my work is always coming out of something personal and emotional. I was able to communicate what was going on and how I felt."

That era continued through the mid-'80s, when Goodman decided to go completely abstract. "I felt locked in. I wanted to be free," she says of the switch. "But then I felt like I needed that personal connection again."

In the '90s, she began incorporating equal parts representation and abstraction into her paintings. "I had put on a lot of weight, and I wanted to do some paintings that dealt with how I felt about myself," she says. "So I did this series of paintings that were self-portraits. I carried something of my abstraction into them, but they're clearly figures."

The result is a body of work that can be at once ambiguous and familiar, but almost always unsettling. "I think when you look at all of my work you'll see there is no signature style other than I take risks and move around in my work, and it's always emotive and personal," she says.

The cause for Goodman's homecoming are a pair of retrospectives, which will collectively offer the first full glimpse at her 50-year career. Brenda Goodman: Selected Work 1961-2015 will take a look at paintings created from her time as a student at the College for Creative Studies (then known as the Society of Arts and Crafts) in the early '60s through the present. Meanwhile, Brenda Goodman: A Life on Paper will showcase much of her less-known work.

The shows mark the first time Goodman has returned to her hometown since 2003, and Goodman says she looks forward to a reunion of the Corridor artists. "It really felt like a community, where we hung out. I wasn't a real drinker, but they'd all go to the bar later at night," she says. "If I wanted to do a studio visit, I had to do it between the guys drinking their heads off at night, and then having a hangover the first part of the day. I figured that around 3 o'clock was always a good time for doing a studio visit, because it was between them getting drunk and sobering up, so there was a little window there."

Goodman admits the scene wasn't always pretty. "I do think there were some jealousies, and competitiveness," she says. "But everyone seemed to really like that we were all together. I don't think it's ever been quite like that since then — and my guess is it never will be."