Michigan's long, brutal winter is finally over — and not only that, but this dreary fucking pandemic finally seems to be subsiding, too. So far, about 60% of Michigan residents have been vaccinated against COVID-19, and Governor Gretchen Whitmer announced that the state will lift all pandemic restrictions by July 1. (Tip: If you haven't already done so, get your ass vaccinated!) With life returning to some semblance of normal around here, we've come up with a list of things that we missed doing in and around Detroit last summer. So get your normal ass out there and start crossing some normal-ass shit off this normal-ass list!

Kayak down the river

Social distancing is easy when you're on the water. You can paddle through the iconic Detroit River on guided tours on kayak and stand-up paddle boards from Detroit River Sports (14601 Riverside Blvd., Detroit; 313-908-0484; detroitriversports.com). Depending on the crowd, you can go for a nighttime light adventure or a tour through Detroit's historic canals district. Just be careful that you don't paddle too far and end up in Canada. Another one of our favorites is Stony Creek Metropark (4300 Main Park Dr., Shelby Twp.; 586-781-4242; metroparks.com).

We're looking forward to taking some time out of our day to admire the murals of Detroit, many of which were arranged by the annual Murals in the Market Festival (muralsinthemarket.com), which is teasing a possible 2021 return. There's also a new "augmented reality" mural festival, Electrifly (electriflydetroit.com), which is bringing six murals around the city to life with animations you can view by holding your phone up to the artwork.

We're so sick of ordering DoorDash, so we're looking forward to exploring the vendor stalls of Detroit's historic Eastern Market district (easternmarket.org), where the streets and sheds are lined with vegetables, meat, flowers, and various wares. Plus, there's the outstanding people-watching and outdoor music and barbecue smells coming from Bert's Market Place (2727 Russell St., Detroit; 313-567-2030; bertsentertainmentcomplex.com).

We're really looking forward to an opportunity to tune up our bikes and hit the Dequindre Cut Greenway (detroitriverfront.org), a 1.65-mile former railway line and graffiti writer's paradise near Eastern Market that now boasts murals, street musicians, and the Freight Yard Bar, an outdoor beer and wine garden.

Cheer for the Tigers

Capacity limits at outdoor stadiums were lifted on June 1, which means it's time for some fucking peanuts and Cracker Jacks. That's right, folks, Comerica Park (2100 Woodward Ave., Detroit; 313-962-4000; mlb.com/tigers/ballpark) is open for business once again, and despite the Tigers' mediocre performance over the past few years, the fans keep coming back, keeping the Kiss Cam and seventh-inning stretch as interesting as ever.

Live music is back, and concert listings are flooding the calendar on metrotimes.com. See our summer concert guide in this week's issue for a look at some of the biggest acts coming through metro Detroit this year.

Take a hike — literally. Metro Detroit has dozens of trails for both novices and seasoned pros, including the 40-mile Potawatomi Trail (8555 Silver Hill Rd., Pinckney; 734-426-4913) that includes forests, lakes, streams, and bridges.

Despite the rocky shores and copious amounts of goose shit, Detroit's Belle Isle is the perfect place to tan on a sunny day with priceless views of the Detroit skyline. And while the island's Belle Isle Aquarium and Anna Scripps Whitcomb Conservatory appear to still be temporarily closed, the Nature Center (176 Lakeside Dr., Detroit; 313-852-4056; belleislenaturecenter.detroitzoo.org) is open for pre-registered outdoor events like nature hikes.

This time last summer, the low-budget made-in-Michigan horror film The Wretched topped the box-office charts, placing it among titans of cinema like Titanic and Avatar, thanks to a savvy idea to release the film in pandemic-proof drive-in theaters like Dearborn's Ford-Wyoming Drive-In (10400 Ford Rd., Dearborn; 313-846-6910; forddrivein.com). Well, this year the movies are back, with the ninth installment of the longstanding Fast & Furious franchise being marketed as no less than the return of Hollywood writ large. We'll take a large popcorn with that.

Roller skate in a work of art

Opened last month on the site of Bedrock Detroit's stalled Monroe Blocks Project, the Monroe Street Midway (corner of Monroe and Farmer Streets, deckedoutdetroit.com/midway) is an outdoor entertainment complex that includes a roller skating rink run by Southwest Detroit's Rollercade, basketball courts, DJs, and food trucks. But the pièce de résistance is the artwork that adorns the space, which includes work by Sheefy McFly on the roller rink, Phillip Simpson on the basketball courts, and a mural that's a collaboration between Olivia Guterson and poet Jessica Care Moore along the walls. Skate sessions are $13 for skate rental and time. 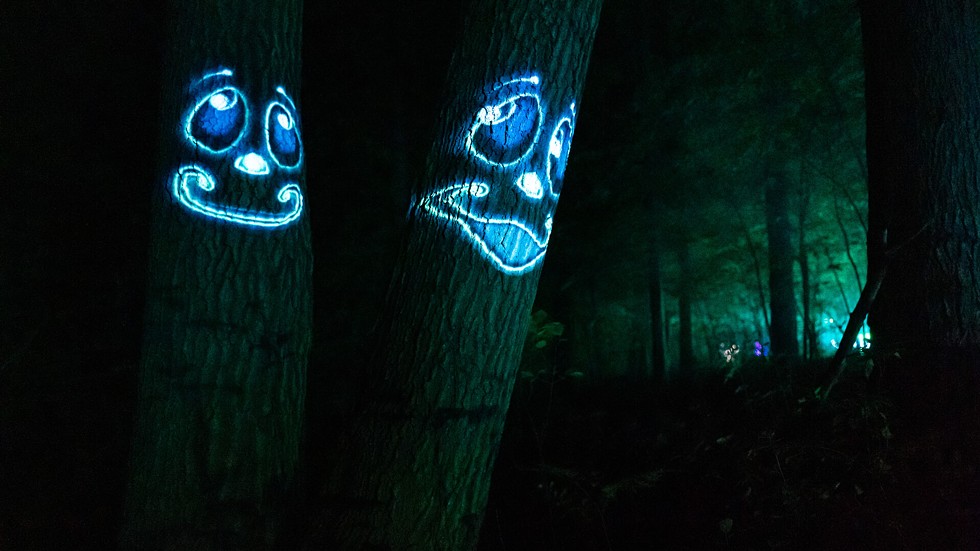 Last year, Bluewater Technologies, a Southfield-based company that provides audiovisual technology for large-scale events like the North American International Auto Show, had to pivot due to the pandemic. That resulted in Glenlore Trails (3860 Newton Rd., Commerce Charter Twp.; glenloretrails.com), an immersive, illuminated experience that saw a half-mile trail in Commerce Township outfitted in custom light and sound installations. The company updated it for Halloween and the winter holidays, and it's not stopping there. On July 1, the trail will double to more than a mile in length, with new installations that help flesh out the characters and storylines (we're told it's got something to do with cryptozoology). Sounds like a trip.

From the folks who brought us the Detroit Rolling Pub pedal pubs and Aloha Tiki Tour boats comes a new attraction that combines both: a tiki-themed pedal pub, which the owners claim is the world's first. The thatch roof and bamboo-accented Tiki Bar Bike leaves from Bookies Bar and Grill (2208 Cass Ave., Detroit; 313-962-0319; detroitrollingpub.com) and can seat 16. Like the Aloha Tiki Tour boats, drinks are BYOB, and tours are two hours. According to a Facebook post, all customers will get a $20 gift card to use at Bookies after the tour. Tours are $295 Monday-Thursday, $375 on Fridays, $400 on Saturdays, and $345 on Sundays.

Travel back in time

Dearborn's open-air historical museum Greenfield Village (20900 Oakwood Blvd., Dearborn; 313-982-6001; thehenryford.org) opened to the public during its traditional time in April with some social-distancing measures, including closing most indoor spaces to the public and eliminating hands-on exhibits. But new this year are attractions like the return of the "omnibus" horse-drawn carriage rides and a renovated replica of Thomas Edison's Menlo Park Laboratory, which is now sporting a fresh coat of paint. Take us back to 1876.

Step inside a Van Gogh painting

Two dueling exhibitions based on the work of Vincent van Gogh are traveling across the country, with stops in Detroit along the way. (Which is annoying — aside from being confusing, it's icky to think of others profiting off of the work of an artist who reportedly only sold one painting during his life and died penniless). Anyway, the first stop is Beyond Van Gogh: An Immersive Experience (vangoghdetroit.com), which will project animated versions of his paintings on the walls of Detroit's TCF Center. The other exhibit, Immersive Van Gogh Exhibit Detroit (detroitvangogh.com), arrives in October at a venue TBA.

Hop on a boat and take in the history of the D in a guided tour of Detroit's waterfront and automotive heritage (and don't worry, some Canadian history, too). Diamond Jack's River Tours (1340 Atwater St., Detroit; 313-843-9376; diamondjack.com) offers sightseeing tours of the Detroit River four days a week.

Drink a beer on a beautiful patio

If you seek a pleasant patio, look about you. Detroit has plenty of beautiful patios for al fresco drinking. Some of our favorites we're looking forward to are old favorite the Old Miami (3930 Cass Ave., Detroit; 313-831-3830; oldmiami.business.site) and newcomer the Monarch Club (33 John R Rd., Detroit; 313-306-2380); monarchclubdetroit.com), which offers a stunning view from the top of the restored Metropolitan Building.

Detroit's RiverWalk (detroitriverfront.org) is undergoing a stunning transformation. In May, groundwork began on a new link to the RiverWalk from the old Uniroyal site near Belle Isle, with plans to eventually expand westward from the former site of Joe Louis Arena to Riverside Park. In the meantime, we're looking forward to traversing the existing promenade.

June is traditionally Pride Month, but this year's LGBTQ celebrations have been postponed due to the pandemic. As of now, the Motor City Pride festival and parade (live.motorcitypride.org) are set to return to Detroit's Hart Plaza Sept. 18 and 19 — just in time for the last day of summer.

Unfortunately, the annual summertime Ford Fireworks (clickondetroit.com) is being relegated to television again this year, due to the pandemic. This year's show will take place on Monday, June 28, on WDIV-TV Channel 4. Here's to 2022!

We wanna shout it from the mountaintops: We love weed! And it's legal now. Find a dispensary near you at metrotimes.com/weed.