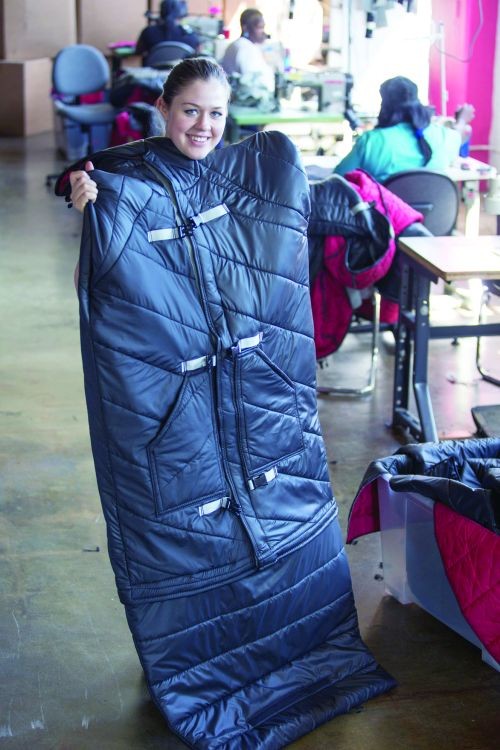 Noise from banks of humming sewing machines mixes with the chitchat of women running them; drilling and boots hitting a cement floor could be heard from outside the staircase of Corktown’s Pony Ride building.

On one of the last unseasonably hot September days, these Detroiters were hard at work. Unlike other city incubators, there aren’t many laptops seen on top of the desks, rather the accruement on the wide-open workbenches and fabric-lined shelves suggest this place is for hands-on assembly work.

Empowerment Plan, Pony Ride’s first tenant in 2011, was founded by College for Creative Studies graduate Veronika Scott, 23, who admits that running a fashion business was never a part of her plan.

“I’d been accepted into other art schools including Yale (University School of Art),” she says, “but chose CCS because they offered the best scholarship package.”

Scott explained that her undergraduate experience at CCS propelled her to create the business plan that would become the Empowerment Plan, a nonprofit responsible for the sleeping bag coat.

The garment was designed specifically for Detroit’s homeless population that transforms from a heat-trapping system during the day into a self-heated, waterproof sleeping bag at night.

“I grew up in poverty so the fact that CCS gave me the best financial aid package is the sole reason why I stayed in Detroit,” says Scott. “A product-design class assignment was given to produce a sustainable and tactical product that was needed by our community.” That design activism class changed the course of her life and turned a passion for art into a full-fledged fashion enterprise.

The Business of Fashion

The initial business proposal for Empowerment Plan included a mere budget of $1,600 that would allow her to run her company, produce her EMPWR coats and fill orders for a year.

Scott didn’t have a clue on how to start and run a fashion business. She literally had to build it from the ground up; starting with one employee, three sewing machines, a check for $1,600, training guidance and material funded by the CEO of Dearborn-based Carhartt, Inc.

“It was the dean of CCS (Imre Molnar) who said this coat was marketable and that I should basically put up or shut up,” believes Scott. “It was then that I had to make up my mind that I was going to do this. I’d done my research and developed a prototype with people that would actually need this coat; it just organically grew from there.”

Her former mentor and greatest support, Molnar, was quoted as saying, “The truth is, Veronika’s garment has great international ramifications.” And the world seems to be taking notice.

Materials donated by General Motors allowed the company to distribute more than 1,000 coats to people in need. Receiving hundreds of thousands of dollars in donations, national speaking engagement requests and international media exposure has only heightened her success.

“We sell each coat for $100, which gets you a coat and a homeless person a coat,” says Scott. “For every one position we post, there are at least 50 people in a shelter that apply. We can’t hire them all but we can create an organization that doesn’t forget them.”

Her business plan has since evolved from just manufacturing sleeping bag coats to now include a nine-month program that trains and prepares women, especially single mothers, for life outside of the shelter system.

It’s that same needle-to-fabric philosophy that attracts both tenants and employees to the Pony Ride building. They come for work, collaboration, support and space to create.

“We could not have operated this building and grown these companies without the help of volunteers rolling up their sleeves to make their dreams happen,” says Kate Bordine, executive director at Pony Ride. “We don’t really call ourselves an incubator per se, but the tenants here reply on each other to make their businesses grow; they collaborate, they encourage and they really support each other. It’s why Pony Ride is here.”

Housed on the second floor of a multi-shared space in the Pony Ride building of Corktown, Empowerment Plan has a CEO office space, room for 10 sewing machines, a coordinator and support staff. Right next door is Detroit Denim, another fashion brand producing hand-made jeans by its owner, Eric Yelsma.

“I’d been working on Detroit Denim for three years in my basement and thought I could continue to go it alone” says Yelsma. “But it was overwhelming. Being [at Pony Ride] was such a good fit; being with a community of collaborators allow me to do what I do.”

Referred to as an artistic collective, Pony Ride is also occupied by a Videographer, an old fashion typesetting business, visual artists and a digital media sole proprietorship. “There are some people, usually accountants, that come in here and see all the cracks in the wall or that we have a (small) hole in our floor … we know some people won’t get it,” says Scott. “I need that; as an artist, I need to be around other artistic people. Pony Ride keeps it artistic.”

Recalling the advice of her grandfather, Marshall Charlip, a retired school psychologist with the Detroit Public School system, Scott believes that Empowerment Plan has a greater purpose.

“My grandfather was the one that went with me to the homeless shelters for months when we were designing the sleeping bag coat,” remembers Scott. “He always told me to never promise what I can’t deliver and don’t try to change the world; start with one person at a time. I’ve followed his advice and believe in that business practice.”

Darralynn Hutson is a freelance journalist and contributor to the Metro Times. Send comments to letters@metrotimes.com.