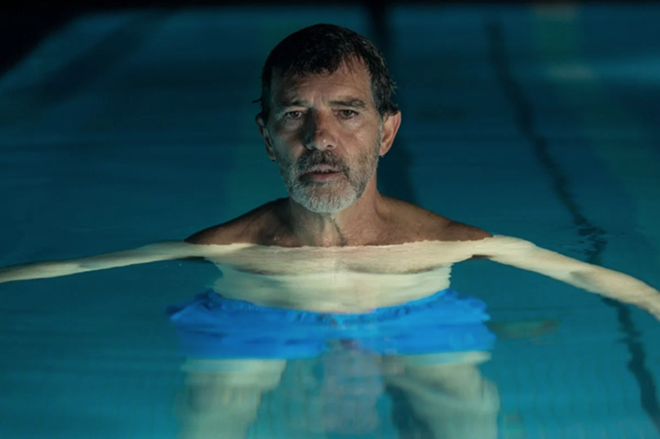 In its pairing of intense bodily pain with the freedoms found in artistic expression, Pedro Almodovar’s Pain and Glory is as Catholic as its title. Following acclaimed Spanish director Salvador Mallo (played gamely by Antonio Banderas) slowly recovering from a host of maladies (a bouquet of physical ones along with a depression), Pain and Glory is more meditation than story, a feature-length musing on a life lived most fully through art.

Pain’s protagonist Salvador Mallo scans as “showing signs of aging” rather than “being old” (Banderas, who sinks comfortably into the role, is 59). In other words, its lead character is reckoning less with death as something that’s imminently approaching than with a struggle to accept aging — and his growing frailty — as a process. Unable to work more from a mix of pained frustration and existential angst than real physical inability, Mallo spends much of the film settling old scores. Long-neglected professional, friendly, and romantic entanglements all resurface as a career retrospective, and health-related woes lead him to parse his struggles via flashbacks, opioids, writing, and conversation.

Though certifiably solipsistic (and a barely veiled autobiography), the film doesn’t feel mired by these qualities; from its very opening, Pain and Glory moves easily. Both emotionally dextrous and finely paced, it glides from conversations with an old, admiring collaborator (Asier Etxeandia) to meetings with a former lover (Leonardo Sbaraglia) in a way that’s reliably convincing in feeling if not likelihood. Authenticity here seems no great leap for Almodovar, but Pain does feel largely honest even as its aura of feeling is magnified through its script’s use of serendipitous chance and its art directors’ fanciful construction of its world. From its edge-of-gauche interiors (Mallo’s apartment is a wonder to behold) to the custom-patterned costumes that adorn both period and present settings, Pain and Glory sells itself as work by a connoisseur of visual texture and physical beauty, an ardent lover of the material world. The best word for that might just be “lover.”

Seen this way, even for a relatively young reviewer, Pain’s fraught relationship to death and aging becomes easier to grasp. Each migraine and choking fit for Mallo serves as more than just a bodily failure or an impediment to work — they all become haunting reminders of his physical and experiential end, the point at which all earthly pleasures run dry. The same goes, really, for the local retrospective of his work that’s staged across the film, which asks him to reconnect with a past from which he’s long been estranged — at least consciously so. Though atheist by his own description, Mallo prays anyway when the pain hits hardest, a desperate conjuring of hope at the times it’s most needed.

That word, “conjuring,” could be used fairly for Pain’s trips through Mallo’s memory, which aren’t above nostalgia in their romantic re-creation of his impoverished childhood, and see him moving with his parents into a pueblo-like whitewashed cave. If his depictions of his own precociousness, apparent promise, and an early awakening of queer desire seem potentially maudlin or self-involved (as well as clichéd), they’re at least approached with honesty and self-awareness. For Pain’s story to make sense for Mallo, Almodovar, or us as viewers, it seems necessary to reach back, to understand the loves that have animated its lead’s life and to understand the place from which certain predilections might have come. Mallo’s desirous relationship to youth is there, as is his attention to color, his love of portraiture, and his sensitivity to texture as a prime purveyor of life and meaning — all conspicuous pieces of Almodovar’s work. There, too, is his fairly Catholic, culturally mediated evocation of perfect women: Mallo’s mother is played by Penelope Cruz, miraculously ageless even without CGI, and she’s only as tempestuous in character here as a light, warm rain. A fierce advocate for and protector of her son, she angles constantly to build him a better life by whatever means she can.

When Cruz is replaced by an older actress (Julieta Serrano) in a second set of more recent flashbacks (this time near the end of her own life), it feels like a necessary shock to the movie’s logic. Disrupting Pain’s previous contrasting of a sweet past with a troubled present, this simple bridging braids the two together via the threads they share, evoking life as a continuum not reducible to categories or simple phases. It reveals the film’s whole spread, its reality and its fiction, to be part of the same subjective vision. Through interrogating his own (crucially, fictionalized) vision of himself and his own past in this way — never purging it completely of its air of fantasy — Almodovar gets at an emotional reality that he couldn’t by rendering things just literally. By detailing Mallo’s life as one lived out through stories, he blurs memory and fantasy with personalized fiction. By showing us a world never witnessed absent the lens of personal vision, Almodovar demonstrates both an inability to "tell it straight" and a vision of life that feels truly honest: a fine alternative to the divine.