A dash of style 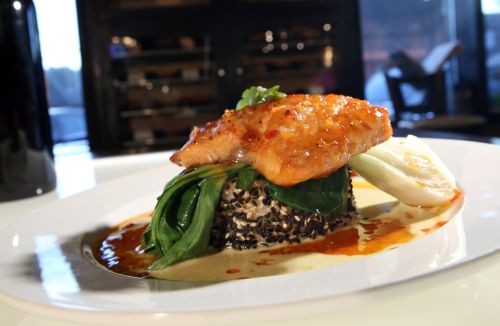 I made a mistake regarding a bill at Panache, and the folks there went out of their way to fix it; they really were extraordinarily generous. Classy, even. So it saddens me to criticize. But I’d be less than honest if I didn’t say that my recurring observation at the restaurant was a certain lack of … panache. If only they’d chosen a different name.

“Panache” means flair, elegance, style, dash. Though some tasty dishes are served here, too often a flaw interrupts the experience. Example: The place looks snazzy. Booths are upholstered in white, and there’s a huge portrait of a classical-looking lady over the bar. But the music is a random collection of undistinguished rock and country, and the silverware is diner-quality.

Or, to be really picky, the ladies’ room is done in today’s usual stylish fashion, with some cool poster reproductions. But then a big roll of brown paper toweling sits on the sink. No one was making sure it got installed in the holder?

Misspellings on the menu don’t lend confidence, nor neologisms like “shrimpamari” (a cousin to “broasted”?).

These are the sorts of details, dear restaurateurs, that add up.

They’re also the sorts of things, as regular readers know, that I’m more than happy to ignore if the food is stellar. At another recently visited restaurant, I saw nothing in the way of visible panache, which apparently had not even been attempted. But the kitchen knew what it was doing. At Panache, we saw a number of instances of heavy-handedness — the opposite of panache — or mistakes that seemed like “who’s in charge?” type of errors.

When I ordered chicken and chorizo linguini, I wasn’t that interested in the chicken. If the kitchen was out of chorizo, it was the chef’s duty to tell the waiter and for him to give me a chance to make another selection. The pasta came with a mild ham. The dish was pleasant enough, with a Parmesan cream sauce, but, of course, without the spice and bite advertised.

Similarly, a roasted beet salad that publicized spring mix was instead pale romaine. I’m willing to take on faith that the beets really were roasted, but they certainly had the taste and texture of canned.

It’s all in the tongue of the beholder, of course. We met a Plymouthite who dines at Panache at least once a week, often more, and raved about the place. She ordered a giant wedge of iceberg and happily pointed to the abundance of “bacon bits.” (I’m sure these were morsels of real bacon, not “Bac-O Bits.”)  She also praised the crab cake corndogs, which I ordered too. These are lollipops, the exterior of which is indeed corndog-like, the interior OK, if not extremely crabby. Two of the three sauces — a coconut that reminded me of Indian-restaurant korma, and a sweet-sour — fit my proclivities, and who knows, perhaps she didn’t find the dogs’ corn relish undistinguished, and liked the ultra-hot third sauce too.

Coca Cola short ribs were very tender and sweet, especially the gravy — too sweet for me, but fantastic to the companion who ordered them. “Tomato Provençal” soup was like a thick, textured arrabiata sauce — could be fine if that’s what you wanted.

Other dishes lived up to (my) expectations: a grilled Caesar strong on anchovy flavor, a well-spiced stuffed chicken breast. Meatloaf cupcakes, a beef and bison blend, were very soft and spiced kind of like Thanksgiving stuffing — sage?

“Panache” should connote a sophisticated understanding of when too much is too much, and holding back is the preferential option. Both of us liked a fillet with a Michigan cherry port wine sauce. The beef was tender with just a hint of a crust that added a fillip of texture and flavor. The mashed potatoes were silky as could be. But I wouldn’t have made the sauce quite so cherry. Really, this is nitpicking, though. When attenuated by the meat or the spuds, it was delish.

I also liked a frutti di mare with (one) scallop, shrimp, mussels and calamari. The mussels were especially pleasing, salty but imbued with a wealth of flavors from the “Pinot Grisio” sauce. Somehow, though, the excellent sauce hadn’t soaked into the pasta.

Desserts tend toward the unsophisticated — chocolate, chocolate, chocolate. We had a Double Chocolate Cookie Bowl, a “Schocolatta ala Sharon” (a mousse), and Panache Pie: fudge, vanilla ice cream and peanut butter being the main flavors. I’d be the last person to say this type of dessert isn’t delicious, but so is a Reese’s Cup. In an appetizers-in-two-figures restaurant, often the chef tries for a bit more — dash. Elephant ear and carrot cake are two non-chocolate choices.

Since I visited, the Panache menu has been lengthened and some items replaced. No more chicken and chorizo; fish tacos and pad Thai are new. I always worry when too many ethnicities appear on one menu, but we’ll see. After all, this is the restaurant where you can add 21 items to your burger, including peanut butter, at no extra cost. I’d like to see a diner who could eat that with panache.