Saved by the nerds 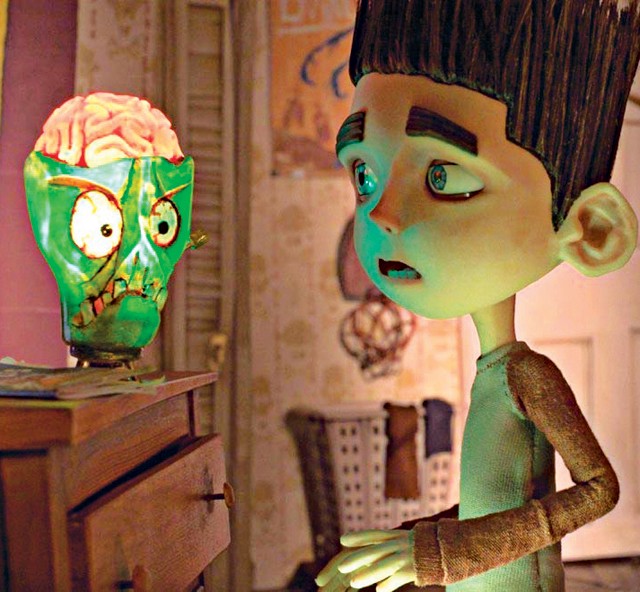 Being the weird kid sucks. Yes, the rise of the Internet and fanboy culture has allowed adult geeks to inherit, if not the Earth, then a goodly portion of pop culture, but the ugly truth of the playground still remains: Nerds are not welcome.

Norman Babcock (voiced by Kodi Smit-McPhee) is an unfortunate member of that caste, making him an outcast and a target for the school bully, Alvin (Christopher Mintz-Plasse). Lonely, sullen and preoccupied with the supernatural (zombies in particular), Norman's the freak no one wants to be around — not his classmates, not his father (Jeff Garlin) and certainly not his teenage sister Courtney (Anna Kendrick). But Norman's preoccupation with the dead isn't just a gruesome hobby, it's a life-calling. Like Haley Joel Osment in The Sixth Sense, he can see and talk to ghosts. But unlike Shyamalan's haunted drama, Norman's interactions are mostly benign. That is, until his weird uncle, Mr. Prenderghast (John Goodman), starts talking about a witch's curse. Soon the town is fighting off zombies and Norman is the only one who can break the spell. Teamed with his new best friend Neil (Tucker Albrizzi), Alvin, his sister, and Neil's older brother Mitch (Casey Affleck), the village oddball must become its savior and hero.

While ParaNorman's script won't win any awards for originality, its handcrafted look and heartfelt execution is simply first-rate. Oregon-based Laika animation studio follows up its sublime stop-action adaptation of Neil Gaiman's Coraline with yet another tale of an alienated child who is assisted by ghostly characters to solve a spooky mystery. But instead of unnerving adolescent viewers with the dark truths that challenge childhood innocence, co-directors Chris Butler (who also wrote the script) and Sam Fell (Flushed Away) opt for a lighter tone. Diluting the more serious underpinnings of their story with eccentric humor, frenetic chase scenes and a sumptuously cinematic style that clever capitalizes on the look and feel of classic horror films, the filmmakers keep everything decidedly family-friendly.

And from an entertainment point of view, the approach makes sense. Despite its box office success, Coraline's macabre sensibility was a tough sell to many tikes. ParaNorman opts for a kinder, gentler plan of attack. Still, it's a shame the script's more ambitious ideas weren't better integrated into the story. While kids will have no trouble understanding the film's message that we should look past the things that scare us to see what is really going on, Butler daringly touches on America's murderously reactionary past. Using the witch trial past of the story's town (smartly called Blithe Hollow), he confronts a community's need to come to terms with the sins of its forefathers and the institutional lies that continue today. Though ParaNorman muddles its way through a rather derivative setup, its conclusion is both chilling and sad, treating both its characters and the audience with respect. Death is depicted as the real deal, and its implications are handled with both gravity and sensitivity.

From a visual standpoint, ParaNorman has set the bar for stop-action animation. The detailed character designs and stylized art direction are nothing short of tremendous, and the 3-D is just icing on the cake. The voice cast is similarly wonderful, making you forget you're watching animated puppets. Goodman is the standout, chewing up the mic with crazed gusto, but whoever decided to cast Tucker Albrizzi as Neil deserves a raise. As the chubby kid with a rock-solid backbone, his character is endlessly amusing and endearing.

A moment of praise is also warranted for Jon Brion's shrewd and spirited score, which subverts horror genre expectations even as it heightens ParaNorman's emotions. Brion transitioned from writing and producing pop music (the Grays, Aimee Mann, Rufus Wainwright, Fiona Apple) to composing movie soundtracks, and his output has been impressive, providing scores for films such as Magnolia, Punch Drunk Love and Eternal Sunshine of the Spotless Mind.

Don't let the lackluster trailers turn you off, ParaNorman pushes the boundaries of what a kid's movie can be. Striking a remarkable balance between eerie suspense and goofball horror, it boasts richly detailed visuals and meticulously crafted animation. More importantly, it has real heart.