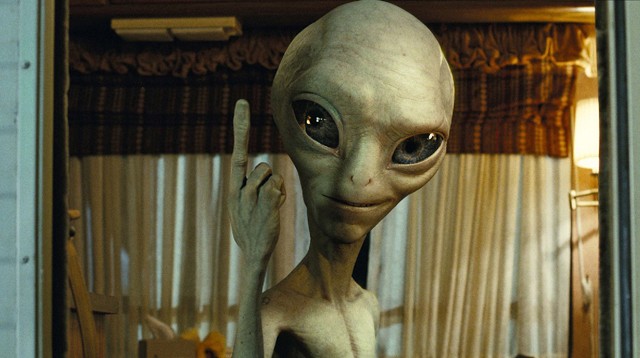 As the flip-flop wearing, wise-cracking, weed-toking, live-bird-munching title critter, Seth Rogen continues to balance between ingratiating and irritating, lending his stoned-out snark and breathy giggle to a CGI critter that's impressively rendered but fairly generic. His wingmen are two personifications of nerd rage, Simon Pegg and Nick Frost (who wrote it), two funny blokes who should act their age.

Frost plays portly Clive, author of an obscure sci-fi novel, notable for the lurid, slave girl cover ("Three Tits!") drawn by Pegg's mild-mannered Graeme. These Brit besties are on a dork pilgrimage to the United States to take a road trip in an RV, with stops at holy sites such as Comic Con, Roswell and Area 51. To their shock and delight, they stumble on a real-life fugitive illegal alien — the kind with an oversized head, magical powers and tendency to flash his otherworldly junk. If he looks like the bug-eyed monster archetype, it's because the government has been seeding his image into pop culture since he crashed on our soil in the '50s, to prepare the public for his debut. The idea didn't work, and rednecks squeal and shoot at him. Paul and friends also have to dodge bullets fired by the G-men on his tail — led by Jason Bateman — as they attempt to find a safe spot for the little guy to phone home. A sheltered Bible-thumper, played with scene-stealing gusto by a very game Kristen Wiig, is along for the ride, and Paul exposes her to a new universe of ideas, drugs and curse words. She has a tentative romance with Pegg, which is tender when the movie isn't blowing things up or being smugly hip.

Paul just drowns in geek butter; every scene is stuffed with winks, nods and Easter eggs, a cavalcade of inside jokes, including a honky-tonk band playing Mos Eisley cantina music with fiddles. A galaxy of fantasy flicks get referenced, but the Star Wars allusions are so numerous that George Lucas could file for a writer's credit.

The film is at once amusing and slightly disappointing. Where Pegg and Frost's earlier hits — Shaun of the Dead and Hot Fuzz — were sharp and targeted satires of specific genres, Paul is vague. An odd amalgamation of E.T., Close Encounters and Men in Black gets spoofed here, all within the superstructure of a fish-outta-water buddy road picture.

While the animated hero may be trying to go home, Frost and Pegg are unwilling to leave the '80s movie womb. It's difficult to lampoon when you're being reverent, or to make jokes with your noses buried in back issues of Starlog.