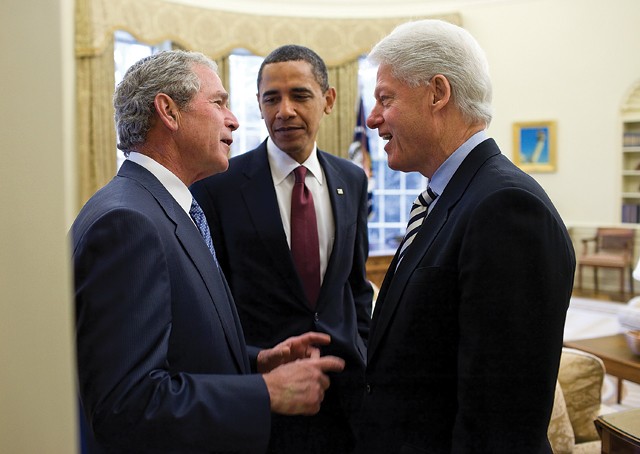 In 2007, Joseph E. Stiglitz, a Nobel Prize-winning economist, wrote in Vanity Fair about the gloom to come and where the blame for it should be placed.

"When we look back someday at the catastrophe that was the Bush administration, we will think of many things: the tragedy of the Iraq war, the shame of Guantanamo and Abu Ghraib, the erosion of civil liberties. The damage done to the American economy does not make front-page headlines every day, but the repercussions will be felt beyond the lifetime of anyone reading this page."

That was written before the burst of the housing bubble and the economic meltdown that in large part can be traced to the deregulation of financial markets. The Great Recession had not yet begun, but the writing was on the wall, and all the print was in red ink.

Stiglitz offered this analysis of the situation at the time: "... a tax code that has become hideously biased in favor of the rich, a national debt that will probably have grown by 70 percent by the time this president leaves Washington; a swelling cascade of mortgage defaults; a record near-$850 billion trade deficit ..."

George W. Bush came into office the beneficiary of Clinton administration economic policies that resulted in a federal budget surplus. After decades of deficit spending that began to balloon during the Reagan years, a centerpiece of the 2000 presidential campaign was the debate over how to spend an anticipated $2.2 trillion budget surplus.

Instead of retaining the policies that created that surplus, Bush — after losing the popular vote and taking office by virtue of a decision from a Supreme Court where conservatives held the majority — and a Republican Congress pushed through tax cuts that largely benefited the rich. According to Stiglitz, those with incomes of more than $1 million received a tax break more than 30 times larger than that received by the average American.

Instead of reducing the amount of money America owed, as he promised his approach would, Bush and his tax policies "directly added $2.5 trillion to the national debt in the full 10 years they have been law," according to the left-leaning Center for American Progress (CAP).

As if that weren't enough, instead of allowing those Bush-era tax cuts to expire for the nation's wealthiest, conservatives in Congress were able use the threat of ending unemployment benefits to the long-term jobless to successfully blackmail President Barack Obama into agreeing to let the wealthy continue to wallow in their spoils for at least two more years.

The cost of extending those tax cuts for the richest 2 percent of Americans over the next two years is $80 billion, according to CAP.

It is astounding, really, that so many Americans continue to swallow this crap.

And now we have the deficit hawks — led by the Tea Party — going full-throttle. We don't know where their heads were stuck while Bush was in charge, busting the national bank. But with control of the House and the ability to block progress in the Senate, they have Obama with his back to the wall.

And so we have the proposed budget the president announced during an appearance at a Maryland middle school on Monday. The symbolism of that setting was meant to convey Obama's determination to keep investing in the future: education, infrastructure and clean energy initiatives.

But, along with those common-sense efforts — which are needed if we are going to have any kind of hope for this nation's future — there are appalling cuts.

Asking how "President Obama's $3.73 trillion budget proposal, which has as its takeaway line a promise to reduce deficits by $1.1 trillion over the next decade" fares when put to what he calls a "moral test," John Nichols, the Washington correspondent for The Nation, points out how the president proposes to:

• Save $100 billion over 10 years by eliminating Pell Grants for needy students who want to take summer classes in order to finish their degrees sooner while allowing interest on graduate school loans to begin building up as students are still in school, meaning that the costs of getting an education will rise dramatically.

• Undermine an essential environmental initiative by cutting a quarter of the funding for the multi-state Great Lakes clean-up project. This project is especially important to so-called "rust-belt" cities, where unaddressed pollution problems invariably pose the most serious health and safety threats to low-income and working-class neighborhoods.

And what is the conservative response?

"The president's budget is the clearest sign yet he simply does not take our fiscal problems seriously," Mitch McConnell, the Senate's top Republican, said. "It is a patronizing plan that says to the American people that their concerns are not his concerns. It's a plan that says fulfilling the president's vision of a future of trains and windmills is more important than a balanced checkbook."

No. The problem is that the primary concern for Republicans, as demonstrated by Bush a decade ago and demonstrated yet again last year when the conservatives in Congress forced an extension of Bush's tax cuts, is to keep ensuring that the pockets of this country's wealthiest citizens — the ones who don't have to worry about keeping their heat on in the winter or being able to afford to send their kids to college — remain well-lined.

Those who will really be getting it, however, are the vast majority of Americans occupying the middle and lower economic classes, the ones who have already suffered much these past two years. They'll be getting it more, and getting it harder.

Bend over and get ready. This is going to hurt.