Permaculture Landscaping on Detroit’s East Side. 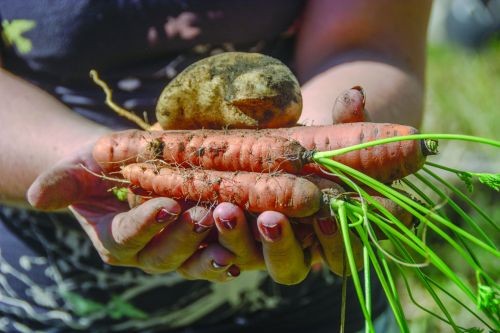 Detroit’s east side has had a rather unsavory reputation, especially since the late 1960s, but as the city struggles to renew itself, some of its residents are working on a micro scale to make their community a better place to live. Residents such as Sara Swor, who came to Detroit in 2011 on a mission to build a garden.

“I could go out and buy a house without being in debt to banks and live within my means; that was very appealing,” Swor says, explaining why she bought here. “So, I scraped together what little money I had to buy a house off of Craigslist for only $5,500.”

There was another reason Swor chose the Motor City for her new home: lax city codes. Detroit allowed her to build a garden, whereas a home in the suburbs would restrict land modifications. “I couldn’t build a garden, I couldn’t have chickens,” she says, then asking rhetorically, “What kind of freedom, what kind life is that?”

Working the earth, Swor says she was appalled at the amount of buried trash she discovered. So, rather than tilling and creating a traditional garden, she took a different approach called hugelkultur; a German word that loosely translates to “mound culture.”

Hugelkultur, which has been used for centuries in Eastern Europe and Germany, is a gardening and farming technique in which woody debris (fallen branches and logs, for instance) are used as a resource. This was perfect for starting a garden in an area filled with fallen branches and overgrowth.

Swor welcomes visitors to her garden and happily gives tours, explaining how it all works. She says she just recently had a group of students from Detroit Public Schools tour the garden, where they gained hands-on experience with sustainable gardening practices. To learn more, visit Swor at 2526 Newport St. She is happy to accept enthusiastic volunteers, donations or work trades.

Click here to take a virtual tour of Swor's garden.