From one Motown poet to another, a tip of the hat 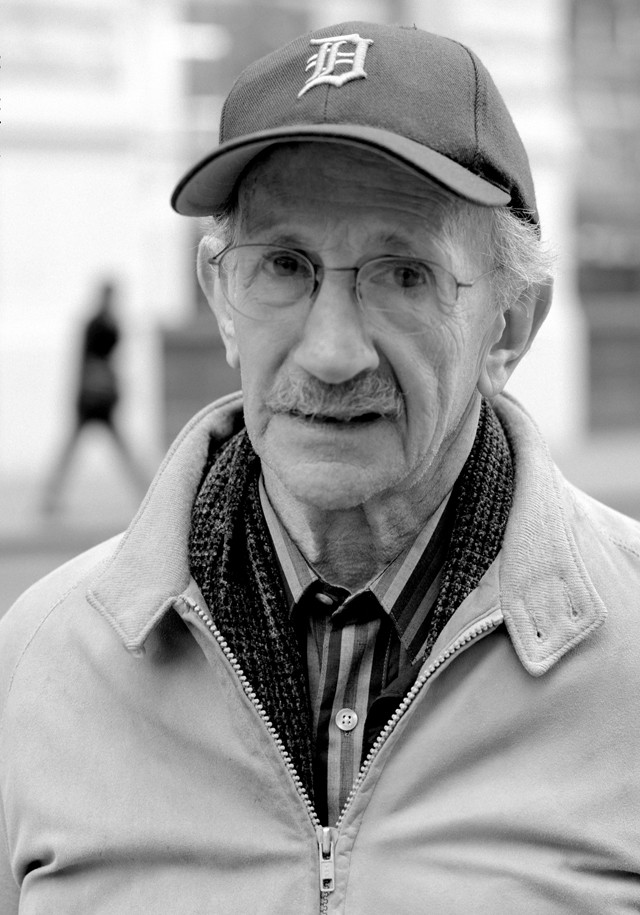 In my briefcase, I carry several books of poems by Philip Levine with me whenever I go into the city schools of Detroit to teach poetry. When I say "to teach poetry," what I am really saying is that I do whatever I can — dance, sing, tell jokes, make up stories about 12-legged octopi — to get the students to pick up their pencils and start to write. When all else fails, I know that I can always flip open to a poem of Levine's, begin reading it out loud, and by mid-poem even the most tuned-out students will soon be sitting up, gazing up, paying attention.

I can stand in front of 35 students with a black magic marker in my hand and do my best to re-enact the moment captured in Levine's poem "M. Degas Teaches Art & Science at Durfee Intermediate School Detroit 1942," a poem that begins:

He made a line on the blackboard,

one bold stroke from right to left

diagonally downward and stood back

to ask, looking at no one

in particular, "What have I done?"

that it was exactly twenty minutes

past eleven, and I thought at worst

this would go on another forty/ minutes.

I like to point this out to my students, especially those who think they have no poetry in them: the fact that even this moment, I tell them, right here in this classroom where we grind though the gearwork of our days, right here in Detroit, this city where even nothing happening is a poem waiting to be told — these are the kinds of moments that Philip Levine has made a lifetime of poems out of his version of Detroit.

Detroit in the year 1942 is what Levine himself calls "a year of growth," and it's proven to be particularly effective when teaching the freshmen I've taught at such schools as Western and Southwestern High. The year of growth, I hear myself tell them, is right here in this room with us. It's what you see out through the window as you wonder to yourself, How long will this last? Levine, who left Detroit after a succession of stupid jobs (his words), left for good (physically) but in his poetry he keeps looking back: back to Detroit, to the places where Levine first worked as a young man and stood in line waiting for work, back to a time "when I was fourteen, I spoke to no one" in a city ...

where I hammered and sawed, singing

my new life of working and earning,

outside in the fresh air of Detroit

Now in his ninth decade, Levine's work as a poet has helped him work all the way up to being named poet laureate of the United States for 2011-2012, an appointment that just recently came to an end: a year of growth, I'm sure, for this 84-year-old poet who continues to produce new poems (his latest book is News of the World, 2009) and whose body of work, unlike the car parts that he used to make at Chevy Gear & Axle, is definitely built to last.

For over three decades Levine made his physical home out in Fresno, Calif. Fellow Californian Joan Didion has written these words about the power of a place: "A place belongs forever to whoever claims it hardest, remembers it most obsessively, wrenches it from itself, shapes it, renders it, loves it so radically that he remakes it in his image."

I think it's safe to say that, even though Levine has made it well known that he left Detroit with bitterness in his mouth and heart, it's clear to the readers of his poetry that Detroit belongs to Philip Levine. As a poet whose poetry never really left or let him leave home, Philip Levine also belongs to Detroit. As Whitman announces at the inauguration of his anthemic "Song of Myself,"

I celebrate myself, and sing myself,

And what I assume you shall assume,

For every atom belonging to me as good belongs to you.

Mr. Levine, I know I speak for many of the poets here in Detroit when I say this: that you are ours. You are in the water of Detroit. You are the smoke and the smokestacks that give shape to our gray skies.

A poet and a teacher in the InsideOut Literary Arts Project, Peter Markus is a recent winner of a Kresge Arts in Detroit Fellowship. Send comments to [email protected]

A poet and a teacher in the InsideOut Literary Arts Project, Peter Markus is a recent winner of a Kresge Arts in Detroit Fellowship. Send comments to [email protected]