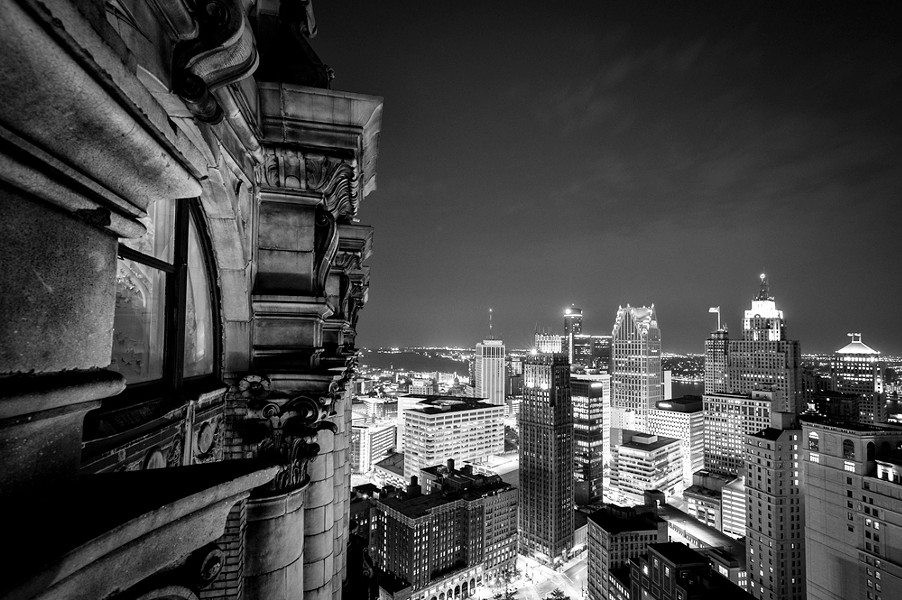 Photo courtesy of the Detroit Institute of Arts. “Gotham, Detroit” by Jon DeBoer.

Photo courtesy of the Detroit Institute of Arts. “Nick Speed and Seven the General” by Jenny Risher.

Detroit After Dark, an exhibit coming to the Detroit Institute of Arts on Friday, Oct. 21 and on view until April 23, 2017, showcases the wonders of Detroit with nightlife photography that includes everything from pictures of musicians to the varied venues they played — no matter how large or small.

Pictures of concert halls stand side-by-side with others of bars and clubs. There are also photographs that showcase some of the changes that have come to Detroit in the form of gentrification, that may well affect the future of some of the places that have otherwise withstood the test of time, as well as architectural studies of the city. The exhibit also includes a small gallery featuring photographs of Paris and New York, a way to further showcase Detroit's place in the history and evolution of night photography and nightlife.

The idea for the exhibit originally came from DIA curator of photography Nancy Barr. "I had done a lot of work by Detroit-based photographers, and there seemed to be some work coming out that was related to night photography and subjects on nightlife," she says.

Barr was also influenced by Hungarian-French photographer Brassaï. Working in the 1930s, Brassaï was one of the first to make in-depth night photography of Paris. Barr says she wanted an exhibit of how photography narratives had influenced surrounding cities and urban photography, and bring it into the current Detroit artistic practice. The exhibition expanded to a section on music, architectural studies, and graffiti, all representing the city of Detroit.

Jenny Risher, one of the photographers featured in the exhibit, completed a series on Detroit before with Heart Soul Detroit, a photobook featuring the city. "It was during the time where there was a lot of negative press on Detroit," Risher says, "So I wanted to interview all these famous people on Detroit and their experiences and how great it was ... in doing the research of the book, I came to learn a lot about the hip-hop community in Detroit."

Risher felt the hip-hop community in Detroit wasn't receiving the visual attention that rock 'n' roll or Motown was, and so she wanted to create a photo series of that scene. In doing so, she worked closely with Barr, selecting artists and taking those subjects around Detroit to highlight the landmarks around the city.

"You only have your light source or whatever it is you're highlighting on the person. It's more technical in the sense that you really have to adjust your lights properly, your ambient, your exposure, your aperture — all of those things must be perfectly tuned in. And you're also enlarging your photographs, so they have to be perfect; you're going to see any imperfection, any outstanding grain or noise."

In short, night photography requires a higher level of concentration, Risher says — but that's the beauty of it. Four of Risher's pieces are now part of the DIA's permanent archives and will be featured in Detroit After Dark. One such image was photographed in the Eastern Market, and features Nick Speed and Seven the General. "For that one, I really wanted to incorporate graffiti. Graffiti is one of the elements of hip-hop, and I really wanted to incorporate that element in a photograph." The keyboard Speed holds in the photograph was given to him by 50 Cent.

Doug Coombe, another photographer featured in the exhibit, got his start by taking a camera to shows to document bands he thought were underappreciated. "Greg Baise introduced me to then-Metro Times music editor Chris Handyside, which led to me photographing the first Blowout, which Chris and Brian Boyle organized. It was literally at the event I realized what an amazing and diverse music scene Detroit has. I ended up photographing every Blowout since."

Coombe photographs a lot of concerts, but has the most fun photographing "an amazing band in a small club. There's a lot more intimacy and a lot more interaction between the artist and the fans. I love to document that interaction as well — not just the musicians," he says.

Other photographers featured in Detroit After Dark include Russ Marshall, Scott Hocking, and Jon DeBoer. Marshall's photographs feature architectural studies, street scenes, and labor centering around the night shift, as well as Baker's Keyboard Lounge. Hocking is an installation-based artist and photographer, and focuses on pictures of empty streets and images of Detroit at night — a somewhat surrealistic, otherworldly vision of the city. DeBoer loves atmospheric shots: fog, snow, rain, and mist. He's one of the few black-and white-photographers in the show.

Barr says Detroit After Dark is important because it shows a mysterious, romantic side of Detroit, while also telling different stories about the city, from jazz legends to hip-hop to famous rock 'n' roll personalities.

"I think the exhibition just scratches the tip of the iceberg regarding Detroit photography," Barr says. "There are so many photographers working, and it's just the jumping-off point for photography and conversations about Detroit."