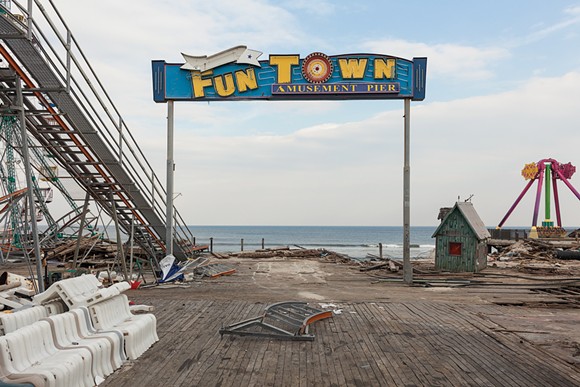 A dilapidated fisherman hut in Louisiana balances precariously on stilts. In Mantoloking, N.J., there's a pile of rubble where beachside houses once stood. In Staten Island, N.Y., a church is slightly skewed, as if the whole building were somehow rendered in italics.

These are some of the scenes presented in Detroit photographer John Ganis' new book, America's Endangered Coasts: Photographs from Texas to Maine (George F. Thompson Publishing). For the project, Ganis embarked on a series of road trips along the Gulf and Atlantic coasts, documenting low-lying areas most vulnerable to sea rise and storm surges — the most immediate and visible effects of climate change.

His last book, 2003's Consuming the American Landscape, was the culmination of 19 years of traveling the U.S. in search of the "ironic beauty" of development amid the rural countryside. But America's Endangered Coasts is both more urgent (it took him six years to shoot, from 2009-2015) and more dystopian. Even when Ganis is shooting quiet fishermen towns or brightly painted resorts against a backdrop of blue skies and seas, there's something decidedly ominous about the photos here, thanks to an almost Kubrickian eye for framing and composition.

Ganis says he doesn't think of himself as an environmentalist so much as fine art documentarian (in 2010, he photographed the BP oil spill in the Gulf and the Enbridge oil spill in Michigan). "I'm still sort of right on that edge between being a documentarian and having the environmental subtext in the work," he says. "But I also want them to be looked at as legitimate photographs in their own right." He describes his shots as "intentionally straightforward ... almost de-aestheticized." 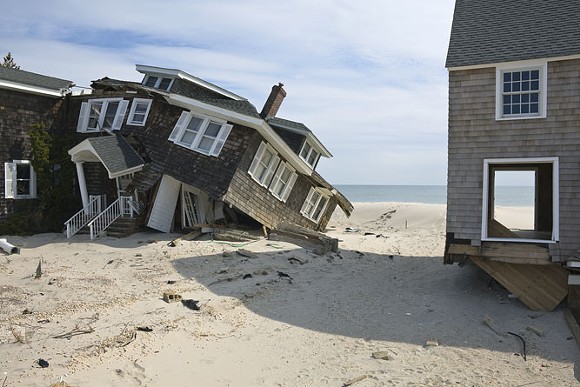 Each photograph is captioned with the site's altitude and GPS coordinates, and presented in sequence as if traveling along the coast. Sometimes the images are presented alone, but others are presented in a before-and-after double-page spread: a sea house destroyed by Hurricane Sandy in 2013 reappears a year later, fortified by a new sea wall (and insurance money).

"It really took on more momentum starting with Hurricane Sandy, realizing that these hurricanes are actually predictive of a future where there are more and more storm surges, more and more hurricanes," Ganis says. "So it's not just the rising of the sea levels themselves, it's all those things associated along the coast with storm surges and big superstorms that will be and have been scientifically shown now to be increasing with climate change."

For Ganis, the choice to photograph these seascapes was simply a way to dramatically visualize the effects of climate change. "I look at sea rise as one of the many manifestations of climate change — not necessarily even the most important, but one that I can photograph and I can track," he says. By using GPS coordinates, he hopes that the sites could be re-evaluated in the future. (The project earned kudos from leading climate change scientist James E. Hansen, who penned an essay for the book. "Somehow scientists cannot make the public understand the slow-motion tragedy that is unfolding," he writes. "So I was elated when I saw John Ganis's photographs of America's endangered coasts, from Texas to Maine. Maybe they will help people see.")

Ganis points out his images from the Isle de Jean Charles, La. This year, the federal government allocated $48 million to resettle the community here — making them the first American climate change refugees. "They don't have to leave," Ganis says. "But they have the option, at least under Obama. Who knows what Trump is going to do."

With a new administration that is revealing itself to be hostile toward climate change science, Ganis is pessimistic about efforts to reverse the trend — we may already be past the tipping point, he says. "When I did the book, I was thinking there's a kind of inevitability about a certain amount of sea rise," he says. "The climate is like a giant millstone that's turning very slowly, but you can't just stop it from changing. The carbon that's emitted is already locked in. The effect of the carbon that's already being emitted won't be seen for many, many years. So we can't stop using carbon tomorrow."

However, Ganis has hope. He points out that the College for Creative Studies, where he serves as a professor, is now offering a concentration in sustainable design. "There's going to be a lot of careers opening up in green design and all this kind of stuff," he says. "It's something that young people really need to be aware of. And young people are getting very active in climate change. I'm very encouraged by that."