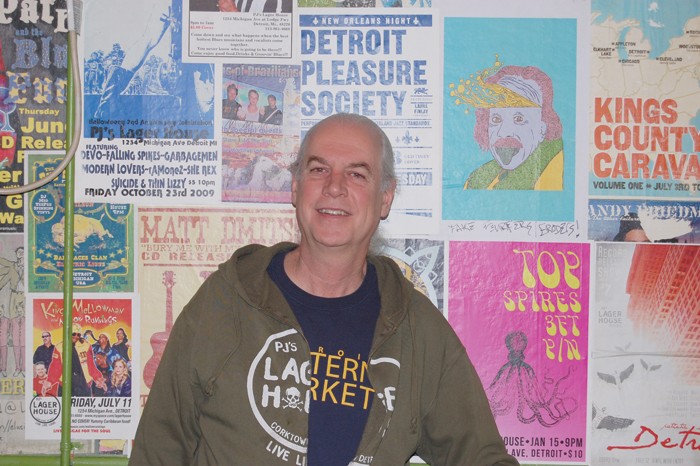 Paul “PJ” Ryder is the owner of PJ’s Lager House, a bar and music venue that is now also a quality eatery with a record store in the basement. A self-proclaimed music nut, PJ has re-energized the place through hard work, great staff and a lot of excellent gigs. The man might be tirelessly digging himself out of debt, but he has no plans to go anywhere just yet. We caught up with him at the Lager House to find out what keeps him going.

Metro Times: When did you buy this place?

Paul “PJ” Ryder: I bought the Lager House in October of 2007. I walked in the front door and didn’t even know how to turn on the lights — I had to call the old owner and ask. I moved back to Detroit in ’95 from Ann Arbor. I was born and raised in Detroit; after high school I went to Ann Arbor and stayed there for 23 years. I had a record store for 15 years, from ’81 to ’96, but once I met Donna [Terek, Detroit News journalist and PJ’s wife] and moved to Detroit, the commute back to Ann Arbor wasn’t reasonable. I just hated that one-hour drive there and back. Plus, I realized that Detroit is a city that could really use me, whereas I was just another cog in Ann Arbor. I went into real estate in Detroit. After 10 years of doing that, I felt like it was getting weirder and weirder. People were getting mortgages who shouldn’t, so I decided to get out. In ’85 I tried to open a rock ’n’ roll bar in Ypsilanti and wasn’t able to, so I decided that I wanted to try that again. The Lager House became available, it had a history, it was fairly close to where I lived in Indian Village, and it just seemed like it was worth giving a shot. I think if Slows Bar-B-Q hadn’t happened, I might have been more hesitant about coming here. Slows showed that it could be done, and I felt like the Lager House had a lot of potential to be better than it was.

MT: What were the biggest challenges you faced when you first got here?

Ryder: One thing I didn’t expect is that, when I bought it, I was seen as an outsider. I was seen as someone taking over their club. A lot of people that came in regularly just stopped coming. That was a surprise to me. Most of those people have come back and say that the place is a lot better. Jack White, one of the times he came back, he took me aside and said, “PJ, you’ve done a hell of a job with this place.” He was here for some of the rougher years. That gives me a little satisfaction, that they do come back and see that it’s still a rock ’n’ roll club. It’s not a drug-infested rock ’n’ roll club where you party until 10 a.m. or something like that, but it’s a rock ’n’ roll club.

MT: Your menu is excellent. Why did you decide to put so much effort into that?

Ryder: When the smoking ban came in, I realized that I had to do something besides alcohol and music, and that’s when I went to the credit card and built a kitchen. I think that we put out food as good as anybody, dollar-for-dollar. I have wonderful staff, who I give a fair amount of freedom to, and they’re the ones who suggested that we do the vegetarian stuff. Now, if you go on Google and type in “vegetarian restaurant Detroit,” we come in right at the top. The combination of the food, the music, the atmosphere — it’s all working for us.

MT: You always seem to be in the bar. What drives you?

Ryder: I like doing what I’m doing. Every band has seen me here at 1 a.m. listening to some band from out of town or in town. I don’t see every show or every band, but I see a lot of them. I pay attention to them, and I care about them. In some ways, every single band and musician that plays here is a little business. Yes, their music is their art, but at the same time it’s a little business where they’re trying to get themselves going.

MT: A lot of big bands, like the White Stripes, have played here in the past. Any that stick out?

Ryder: Every Melvin Davis show sticks in my mind. He’s awesome. I love Whitey Morgan — that guy should be a superstar and he should not be playing the Lager House but he still does and I really appreciate him for that. We had Redd Kross here. That was like the best rock ’n’ roll show ever. That night, everything was perfect. The crowd was perfect, the bands were perfect — we had the Go open up for them. I sat at the back thinking, “This is why I do this.” A show that was not well-attended a few years ago, between Christmas and New Year, was when Johnny Walker & the Cut in the Hill Gang played. Jack White showed up because he’s buddies with Johnny Walker, and he got up and played a couple of tunes. That was quite awesome, but, unfortunately [Jack] walked out to his car at about 2 a.m. and came back in. He said, “PJ, someone tried to steal the tires off my car.” He backed up, and all four tires dropped off. But it was so awesome to see him play with Johnny Walker.