The old Packard factory sits abandoned and crumbling, but it's home sweet home for these guys 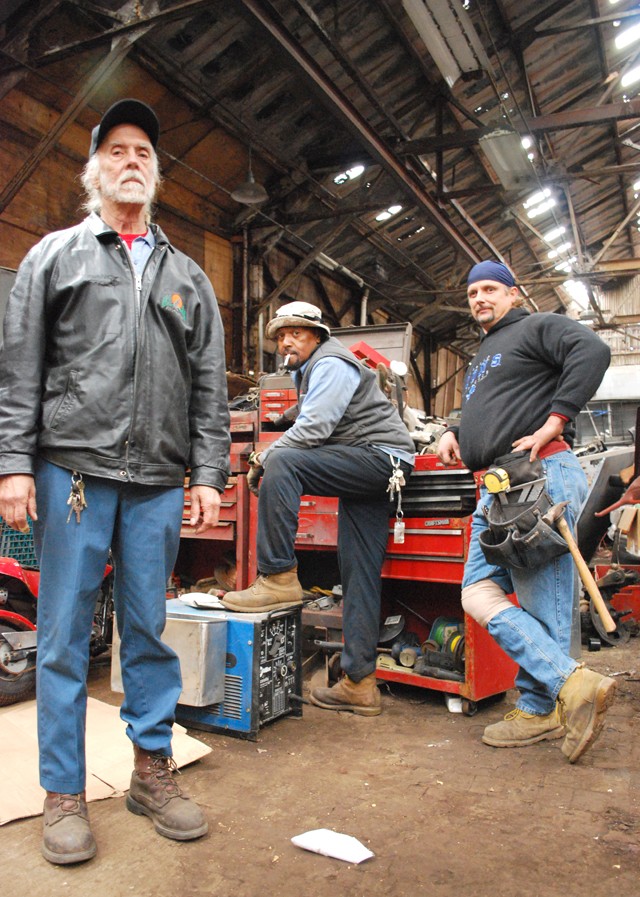 The tourists wandering through their home don't bother them so much. And they're used to the shrill buzz of the saws scrappers bring. Even the snarling bobcat they just ran into in the basement wasn't so scary.

But the people firing guns into the walls have become a bit of a nuisance.

"They just come out here and try out their weapons," says Allan Hill, 65, who points to where a bullet pierced a window, plowed through a ceiling and then kept going to who knows where. "They think that nobody lives here, so they start shooting the building up."

Hill's home is the Packard Plant, the infamous, 35-acre auto factory where production ended a half-century ago. He wound up living here after losing a house to a loan he couldn't repay. "I didn't even need to get a loan," he says, ruefully. "I don't know why I got it. But after that, everything started sliding away from me."

He's not a squatter, though. The electricity and water here is paid for each month. He owns the space he lives in. And this is his official, listed address.

A few years ago, a friend with a warehouse at the decaying plant hired him to look after it, and before long Hill moved into one of the little rooms in back. Now it's his.

During days he started doing side-job auto repair on site, fixing cars brought by customers who knew him years ago at garages where he worked. Soon a few other guys moved in here to live a rugged life in a rent-free space in the middle of nowhere.

They all go by nicknames based on their skills. There's Minister Allan. Mechanic Greg. Carpenter Jeff. Preacher Joe has a house not far down the road but spends most of his time here anyway. And Hill's son Randy just moved in too.

Living in an abandoned factory is as tough as it sounds. "It takes a certain breed of people to handle this kind of stuff," Jeff Lott says.

Like any fussy homeowner, Hill apologizes for the disarray of his place. "Well, it's just a mess right now," he says before reluctantly giving a tour of the living quarters.

He shows the old kitchen, the little bedrooms with mattresses on the floor, the bathrooms and the showers, and the big space where a computer on a desk glows in the darkness of a cluttered room. He keeps a website — mycampage.com/packardproject — dedicated to the plant and his life here, featuring live rooftop webcams showing what's going on at the factory.

But the main area is the cavernous warehouse. Auto parts blanket the dirt floors, engines dangle from chains beneath the sky-high roof, old car frames and broken-down campers point this way and that. At the center of the metal hurricane is a TV, a stereo, some chairs, plus a set of drums and a couple of guitars they jam on sometimes as they try to coalesce into a band.

Few people are left at the factory besides them. Packard ended production there in 1956, but there were dozens of little companies still operating in the complex until 1997, when the city foreclosed on the property and ordered 87 tenants to leave. Then it was left to rot. The only others left now are a chemical processing company, someone selling exterior lighting, a few squatters now and then, and a lot of wild animals.

Besides Hill's dog, a shaggy rottweiler named Baby, they've got a couple of pet raccoons, and they feed lettuce and carrots to a family of rabbits who moved in during the winter. The pheasants that flock around here have provided food in the past. "We do a lot of hunting here," says Lott, 47. "You ever ate city pheasant yet? Oh, it's good eatin'. They're homegrown."

Rats run wild, kept in check only by the several cats Hill keeps or the sharpshooting skills of Lott and fellow tenant Greg Erving, 65. "We shoot rats in here all night," Lott says. They use high-powered pellet guns. "It's a real war going on. You can hear them fighting amongst themselves. Biggest rats in the city. They'll come over and rob your food in a heartbeat. They're bold."

They all met each other through one of those grassroots storefront churches that dot the city, the kind that minister to the addicted and the destitute, and their time there inspired them as a group to do something to help those even poorer than they are.

Somehow they became drawn to the bleak Rosebud Sioux Reservation in South Dakota, and for years now the preacher, the carpenter, the mechanic and the minister take road trips to teach the residents there trades like metalwork and carpentry. Unemployment there is persistently more than 80 percent.

"With the hopelessness that they have — they're constantly drinking, everybody's drinking vodka right out of the bottle, there's a lot of diabetes there because of the diet, they need medical care desperately, young people are killing themselves frequently, sometimes it's three or four in one week — with these issues life on the reservation's gotta be hell," Hill says. They pay for the trips with what they earn from fixing people's vehicles.

Hill wants to someday move to the reservation and open a full-time trade school there.

"What am I gonna do with the rest of my life? Am I just gonna stay here, make a few dollars?" he says. "I should go someplace where information and knowledge is appreciated. I'm thinking that if they learn how to do something, you can empower them and they can work off the reservation."

But right now the guys live among plenty of desperate people here. So Hill bought an old SEMTA shuttle and they began giving rides to the poor and homeless nearby, taking them to obscure little churches, to soup kitchens, to Belle Isle sometimes just to get some air and sunshine.

"It was just put in my heart to do that," Hill says, warming up the shuttle for another day of ferrying poor people around town. "I've found out what a great treasure it is to be able to do that."

Two Dutch filmmakers stumble out of the rubble of a fallen building, led by the man Hill calls Preacher Joe. "More like Nightmare Joe," says the preacher. "I'm a nightmare, really."

Either way, he doesn't like to tell anyone his last name. "He's paranoid," Hill says. "He's kind of shy. He thinks that the FBI is after him." Then he laughs. "But maybe they are."

Joe gives the most colorful and unpredictable tours, and these out-of-towners had the fortune, or misfortune, of stumbling upon him.

"I took them boys all the way down there," says the 52-year-old, pointing down the long street bordered on both sides by the long factory. He loves to mess with people. "They were scared as motherfuckers. They go, 'What is that?' I shine my light down this hole, I go, 'That's where I throw you when you disagree with me." He pestered them for cigarettes. Then he suggested they go get beer and leave their camera behind while he watched it for them. They nervously declined. He's been known to ask for "tax" payments from explorers and he hounds illegal dumpers.

But he's also the one who composed his group's mission statement in flawless prose on a sheet of looseleaf. And he likes the kids who spray-paint murals on the walls. He even gives them fresh cans of paint sometimes. "I love 'em," he says. "This is their chalkboard."

He doesn't live here, but he shares their rough existence. "We ain't got a safe buried up under ground," he says. "We pay electric bills, water bills like anybody else, and it's tight. We're beggin' dog food down here."

They've gotten used to the cold, the solitude, even the concrete buildings that sometimes collapse nearby and shake the ground beneath their feet. They eat dinner together and sometimes watch movies, like any household. But they also get to see the riverfront fireworks from the tall roof, wander a historic warehouse full of things to do, and have 35 acres of caves and fields and rooftops almost entirely to themselves. Not a bad way to live, Hill notes.

"We've got solitude, no mortgage payment, no credit card," he says. "It's like being in the north woods. Life just goes on, you know?"