Romney — weirdness you can count on 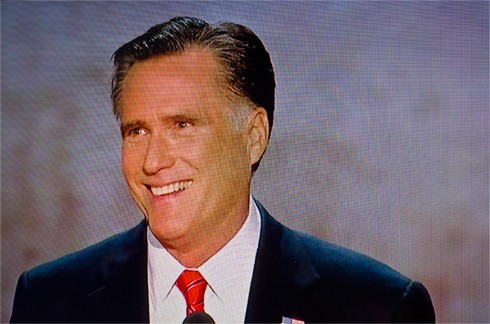 Playing the dozens is a traditional African-American game in which the participants try to cleverly insult each other. The game generally ends when one insult is so good that the opponent is either left speechless or any rejoinder is so lame by comparison he may as well keep his mouth shut ... or when one participant becomes so pissed-off by the insult hurled his way that he forgets he's engaged in verbal jocularity and starts smacking his opponent around with his fists.

The thing about the dozens is you can take any feature of a person and blow it up to incredible proportions that defy sensibility — as in "yo' mama's feet are so big she wears boxcars for slippers."

It's similar to the kind of thing that political campaigns indulge in when the other side commits some slight faux pas and it becomes magnified to the grossest proportions. From where I sit it looks like the right-wing of the Republican Party has become expert at playing a particularly cutthroat, high-stakes version of the dozens. Their most vicious attack is stretching the fact that Obama's father is Kenyan to the conclusion that our president is not American — he's not one of us. The claims that he's a Muslim and a socialist are not far behind. They have taken it so far that it's way more than playing the dozens. They're playing the 47s.

It's those kind of people that candidate Mitt Romney was playing to when he made the now infamous "47 percent" comments at a high-end fundraiser this past spring. Romney described 47 percent of Americans as people who "are dependent on government, who believe that they are victims." Concluding that the 47 percent won't vote for him in any case, he went on to say, "my job is not to worry about those people."

Romney has since claimed that he is concerned about 100 percent of Americans, but I put more belief in what he said behind closed doors when he thought the camera was not rolling than what he said to the media while playing damage control after the comments became public. Come on, he first stood by the sentiment while admitting it was inelegantly stated. So from now on the number 47 will be permanently attached to Romney in my mind. He's Romney47, sort of like we have Bush 41 and Bush 43 — except the 47 has nothing to do with where he falls in the line of presidents. That's a line I hope he never gets to stand in.

Maybe the reason he was attracted to that number is because he was born in '47 (that's 1947 to you pikers — at least you're a piker in relation to the kind of investments Romney47 makes). That was the Chinese Year of the Pig, and Romney47 has been no less than piggish in creating the Obama advantage in support from women. The "binders full of women" comment from the second debate has played nearly as badly as if he'd said he has a little black book full of women. Not only did he blow the question about women's pay equity by not answering it, he probably blew any chance to garner more significant support from women.

The alien spacecraft crash that supposedly took place at Roswell, N.M., was in 1947. While the government disputes that this ever happened, I'm starting to wonder about the coincidence of Romney47's birth and the crash happening so close together. Is he an alien? The guy doesn't appear very comfortable in his human body and he seems to have a problem telling the difference between people and corporations ("my friend"). On top of that he doesn't seem to know that cars don't go in elevators and dogs don't ride on top of cars. Sometimes things happen at the same time by coincidence, sometimes not. Romney47 brags that no one has asked him for his birth certificate. Well I'm asking. Could it be that he's actually a space alien?

The AK-47 assault rifle first went into production in the Soviet Union in 1947, and by the 1980s it was the most famous weapon of choice for American gangbangers. The National Rifle Association, which defends the right of any addled person to buy the assault weapon of their choice, has endorsed Romeny47. The candidate himself has flipped and flopped like a fish out of water on the gun control issue, but he's certainly shown that he's not ready to stand up to a strong lobby like the one wielded by the NRA.

And this final coincidence is that the World Bank began operating in 1947. Romney47 is a World Bank kind of guy; at least he banks around the world. Could it be that his arrival in 1947 was an alien plot to take over the world economy?

Not all 47s are bad. Bo Diddley rocked out on "Who Do You Love" with the lyric, "I walked 47 miles of barbed wire." But the song still touched Romney47's life because that is what his dog Seamus was howling when Romney threw him on the car roof for a vacation trip back in 1983.

Romney47 is willing to stretch the truth, and even go so far as to fib, in order to attain his goals. He's given a nod to the extremist Birthers, who seem to actually believe what they say. The problem is that Romney47 has taken so many different positions on the same issue that it's hard to know what he really believes. Health care reform is good, and then it's bad. Planned Parenthood is good, then it's bad. Romney47 wants to be president so bad, he's willing to court the Tea Party. Oops, that's no exaggeration. It's true.

By the way, when Romney47 sings the song "100 Bottles of Beer on the Wall" he never goes below 47. It's a long song and he can't be bothered concerning himself with what those people do with their beer. They probably got it on some kind of government program.

More dozens: The Rev. Al Sharpton, who hosts a show on MSNBC, has a promo wherein he flips the dozens on their ear. In a spot about the coming election he talks about the bad effect Romney47's policies would have on elderly citizens and says, "It's not about Obama; it's about your mama." Pretty slick.

I like Candy: I have long been a fan of Candy Crowley, the CNN anchor who moderated the second debate. She is my favorite CNN personality. So I loved it when she was tough on the candidates during the debates. Especially when she wouldn't let Romney47 bully her into letting him break the rules he had agreed to before the debate. He seems to be used to getting his own way and doesn't mind doing whatever it takes to achieve his ends. She also showed moxie when she truthed him about when President Obama first called the Libyan embassy attack an "act of terror." Romney47 seemed perplexed when she corrected him when he said it took Obama two weeks to call the attack terror. Obama did it the day after the attack. Romney47 is not used to someone calling him on his fibs. Way to go, Candy. In the aftermath of Wisconsin news anchor Jennifer Livingston being attacked because of her weight, Crowley showed that thick women are more than capable of taking care of business.