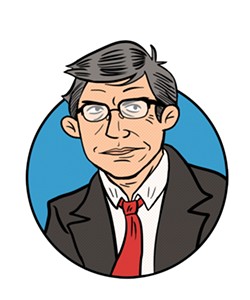 When the news came that a second black veteran had deliberately murdered several cops, I thought I knew exactly what Donald Trump would say, and I wasn’t disappointed in the least.

“How many law enforcement and people have to die because of a lack of leadership in our country? We demand law and order,” the gross pig with the pompadour posted on Facebook.

Well, if that doesn’t make you see marching boots and clubs and black uniforms, you really don’t have a clue. After that first deranged maniac murdered five police officials in Dallas, Lyin’ Donnie Trump began telling audiences that people protesting police brutality had begun asking for a moment of silence for the killer.

This never happened, not once, anywhere. (ABC News did find one idiot who had posted that on some social media site, possibly after Trump made his outrageous charge.) But it is exactly what you would say if you wanted to whip this country into a race war.

Brothers and sisters, I am scared, and you ought to be too. I grew up in an era when we expected an eventual nuclear war, and when we elementary school kids had to practice tucking ourselves under our desks several times a month under the insane notion that this would somehow help us survive an atomic blast.

I was a senior in high school during the long and bloody apocalyptic year of 1968, and later sweated to see if I would get a draft number high enough in order to avoid the hell of Vietnam.

What’s happening now is in a sense worse.

Donald Trump is a race-baiting nihilist demagogue, who by his own admission reads almost nothing; who hasn’t a clue about American democracy and couldn’t care less.

The New York Times has been painstakingly documenting his long history of outrageous lies and shady business deals. He has no more business leading this country than Al Capone did.

Nobody who remembers the ideals America is supposed to stand for could possibly consider voting for Trump. Nobody with half a brain could think of giving the nuclear trigger and the power to wreck our economy to any nitwit without a day’s experience in government.

But last week, the GOP nominated him for president.

You can expect more, much more immigrant-bashing and race-baiting as this campaign goes on, and yes, I worry about martial law being imposed and our civil rights being trashed if he wins.

We once had better leaders than we do now. Watching CNN the night after the Baton Rouge police murders, I suddenly thought of a time long ago when a racial slaying threatened to tear this country apart in the middle of a presidential election.

That, however, was a very different era, and in that case, the murder victim was not a police officer, but the most important African-American leader in the nation.

Robert F. Kennedy was campaigning in Indianapolis on April 4, 1968, the night Martin Luther King Jr. was killed. He had planned to go speak in the worst part of that city’s ghetto. He was warned not to, and his police escort declined to go with him. He went anyway, though candidates didn’t have Secret Service protection then.

That was before people had cellphones. Kennedy had the guts to tell them what had happened. Someone did film his whole brief speech, and you can hear a huge anguished cry of pain.

Then he said, “For those of you who are black and are tempted to be filled with hatred and mistrust of the injustice of such an act, against all white people, I would only say that I can also feel in my heart the same kind of feeling.”

And he told them. “But we have to make an effort in the United States ... to understand, to get beyond, or to go beyond these rather difficult times.” RFK then quoted Aeschylus to the crowd.

Kennedy knew what lay ahead:

But he had something that maybe only Bernie Sanders had this year; hope in what Abraham Lincoln called the better angels of our nature. He really believed, as he told those poor desperate black people that evening that “the vast majority of white people and the vast majority of black people want to live together, want to improve the quality of life, and want justice for all human beings that abide in our land.”

Cities across America erupted in violence that night, but not Indianapolis. Kennedy easily won primaries there and elsewhere.

But exactly two months later, he was shot to death, too.

That was the night before my 16th birthday. I remember all of it, and what happened, and what has happened since.

And now we have a thuggish crypto-fascist religious and ethnic bigot as the presidential nominee of the party of Lincoln.

Over the years, I’ve met men who, for the sake of this nation, would have taken that bullet for Bobby Kennedy.

No one could do that. But today, we do have a chance to do something else vitally important: expose and politically destroy the vile, literally anti-American steaming heap that is Donald Trump.

That’s job one. Do that, and perhaps, someday, we may really move toward the America I wish we deserved.

Well, that may be a little over the top, but this is clear: Unless you are a billionaire or a business, our governor couldn’t care less about you, the quality of your life, or what you think about anything. Remember how long it took him to fire “Dangerous Dan” Wyant, the former director of the MDEQ, the Michigan Department of Environmental Quality?

Wyant and his PR jackal, Brad Wurfel, presided over the DEQ back when they were attempting to cover up the fact that the children of Flint were being poisoned. It took Michigan’s governor forever to fire him, and in a truly telling email, his chief of staff thought he shouldn’t.

“Finding a replacement who has the trust of the business community will be very difficult,” Dennis Muchmore said.

Forget the trust of the people, thousands of whom were poisoned. What matters is the business community.

Snyder’s finally found his ideal woman. He’s naming Heidi Grether, a former lobbyist for BP who was in charge of crafting their response to the worst oil spill in the history of the world, the Deepwater Horizon explosion in the Gulf of Mexico six years ago.

The Detroit Free Press called her appointment “a sick joke.” Well, no. The sick joke was when the Free Press told us two years ago we ought to vote to re-elect Rick Snyder, as indeed we did.

There’s a positive side to all this, however. Heidi will know better than anyone just what to say when Line 5 breaks under the Straits of Mackinac and destroys both Lakes Huron and Michigan.

I can hardly wait.