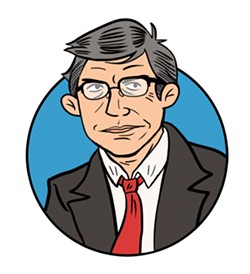 Why Clinton lost: Last week the media and political establishments told the people of Michigan how to vote. And the voters, in a rare burst of democracy, told them where to go.

Hillary Clinton was a sure thing to win Michigan. Everyone knew it. The so-called experts sneered at the idea that these scruffy kids would actually turn out for Bernie Sanders. Virtually every member of the political establishment campaigned for her. Even Jennifer Granholm, who fled the state immediately after her time as governor ended, showed up to tell us to vote for Clinton.

After all, she must be reasoning that just because President Barack Obama (wisely) refused to give her a job, doesn't mean Clinton won't.

However, the people wouldn't listen, and gave Sanders a stunning surprise win. Over on the GOP side of the aisle, the establishment belatedly decided they had to stop Donald Trump. So, with typical Republican logic, they sent out the two best messengers they could find to tell the common boobs not to vote for Trump: Mitt Romney, a man with less working-class appeal than the dowager on Downton Abbey, and "Smirkin' Brian" Calley.

If you've never heard of Calley, don't feel bad; most people in Lansing haven't either, and he is the lieutenant governor. Romney left me one robocall urging me to vote for Marco Rubio, the high school kid who pretends to be a U.S. senator from Florida, and Calley told me to vote for John Kasich, the pasty-faced governor of Ohio, who hates mass transit and Planned Parenthood, but is seen as a moderate because he does not talk about his dick during debates.

Naturally, Trump won Michigan by a landslide. (Romney's endorsement was so helpful that more than 9 out of 10 people voted against Little Marco, who didn't win a single delegate.) As this shows, Republicans tend to be stupider than most people, but there was still a way they might have stopped Trump:

They would have needed to A) settle on a single candidate to embrace and B) get "Rusty Water Rick" Snyder to endorse ... Trump.

Now that would have been the kiss of death! However, this would have required planning and thought.

Meanwhile, back in blasted Michigan...

Drill, baby, drill: Here's why journalism is better than fiction: You just couldn't make this up. As the world now knows, the state poisoned the entire city of Flint's water supply by switching it over to Flint River water, and then failing to add the required corrosion control chemicals.

The badly misnamed Michigan Department of Environmental Quality (MDEQ) not only did nothing to stop this atrocity, it apparently lied about lead levels in the water, may have engaged in a cover-up, and responded with condescension and contempt when people asked about the water quality.

Eventually, this all blew up, and the department director and his obnoxious mouthpiece were fired at the end of last year.

So now imagine that only a couple months later, a greedy Republican politician turned self-styled "bishop" acquires a church in suburban Southfield and applies to the MDEQ for a permit to drill for oil on church property.

Keith Butler was once a Republican Detroit city councilman, and in 2006 ran for the GOP nomination for the U.S. Senate, and was creamed.

Now, however, he runs something called the Word of Faith International Christian Center at Nine Mile and Evergreen, and wants to allow Jordan Development, a Traverse City-based firm, to drill for oil on the site.

If this sounds familiar, I wrote about it in this column on Feb. 17 ("Risking a community for oil?"). The neighbors, many of whom rely on well water, are nearly hysterical with worry.

They oppose the project, as does Mayor Ken Siver and the entire city government. There have been massive protests by Southfield residents.

When the MDEQ finally agreed to hold a public meeting to discuss the project, nearly 1,000 people packed into the auditorium at Southfield High School to protest. Many were angry and frightened.

Several hundred people in the area have well water and fear ground contamination. After the atrocity that was Flint, could anyone believe that the MDEQ would authorize a suburban oil well — especially when the city and the residents are dead set against it?

Oops — can't forget that this is the Snyder administration! Of course they authorized it, announcing their decision on primary election day, possibly to draw as little notice as possible.

Makes sense to me. After all, this is a partnership between a business interest, Jordan Development, and a Republican politician.

Those opposing oil drilling are largely a bunch of black and Jewish Democrats anyway. Hal Fitch, the MDEQ official in charge of oil and gas matters, said all the papers were in order and that they "met all of the rules and regulations." Jawohl!

Well, at least he didn't try to switch Southfield to Rouge River water. Southfield doesn't plan to stop fighting, however. There's now a temporary restraining order barring any drilling of any kind in the city until April 28, and the city is seeking ways to make that permanent, at least in residential areas.

"We believe the DEQ favors drilling companies over people and communities," Siver told me. What a surprise!

But the good news is that Southfield is going to fight this to the end. How this all turns out will be a good indication of how much of our rights people and their communities retain in the Age of Snyder.

Your tax dollars at work, aka pigs at the trough

Possibly our totally ethical governor also timed this announcement so that few will notice.

But he attempted to pull an under-the-radar deal to spend $498,000 of state funds on two high-priced attorneys to save his ass. Under state rules, he's allowed to spend up to $250,000 on anything without having it officially approved by the State Administrative Board.

So Snyder, clearly worried about his own tail in the wake of the Flint water crisis his administration homies caused, wanted to put Brian Lennon, a criminal defense lawyer, and Eugene Driker, a civil defense attorney and an old establishment Democrat, on the state payroll at $249,000 each.

You might think defending the governor was part of Michigan Attorney General Bill Schuette's responsibility, and you'd be right. But the governor no more trusts Schuette to look out for his best interests than he would want an ISIS-supplied food taster in the kitchen, with good reason.

However, the costs of Defending Ricky soon went up, and by last week, the governor had to ask for more money — a total of $400,000 for Driker and $800,000 for Lennon. (Fortunately for him, the State Administrative Board usually does whatever any governor wants it to — and it did.)

Asked about the original contracts, his new mouthpiece, Ari Adler, bizarrely told a reporter, "We do not believe there will be a need for criminal defense, because the governor and his administration have not committed any crimes." Well, that's easy to believe.

After all, most innocent people I know routinely shell out $800,000 a year for counsel, kind of like the way you keep $10 for gas in the glove compartment.

Schuette and Snyder have always been competitive, however, and the attorney general wants to go him one better. He selected one Todd Flood, a buddy of his, to lead the investigation into the Flint mess.

Soon, the press found out that Flood had donated lavishly to both Rick Snyder and Schuette's political campaigns. Shouldn't that disqualify them from getting more of our money to defend Big Daddy?

What an old-fashioned, quaint little idea. By the way, unless he suddenly quits, the lawyers of Lansing should have plenty of opportunities, thanks to our sainted governor and his boys. Whoever said they weren't creating jobs?