You're a target, wherever you are 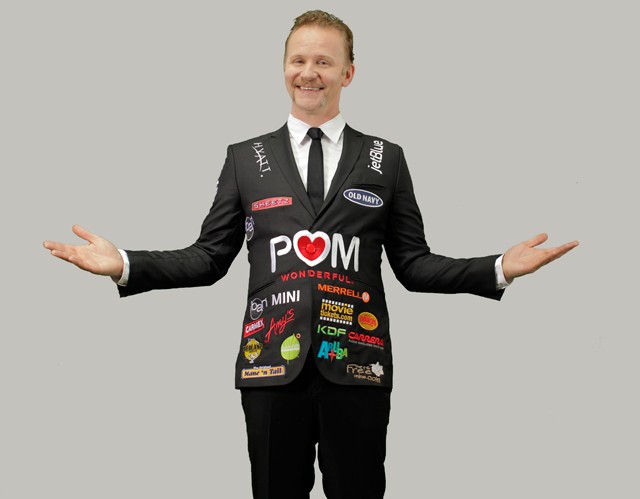 Is corporate watchdog Morgan Spurlock selling out? That's the probing question behind this amusing, skillful doc, as Spurlock postulates that by embracing the influx of corporate money in media, he can expose its insidious influence. To do that he proposes the meta concept of a film about rampant product placement in movies, by making a film that is itself massively subsidized by major corporate partners. If megasmashes like Iron Man can be leveraged to the hilt with fast food and fast car sponsorships woven right into the plot of the movie, then why not do the same thing for a small-budget indie? The answer becomes quickly evident, and while Spurlock hasn't quite made the "docbuster" he set out to, he has managed a fast-moving and fairly enjoyable experiment. Plus; where else are you going to see Donald Trump, Noam Chomsky and Brett Ratner interviewed in the same film?

To better target potential sponsors, Morgan visits a firm of brand identity analysts, who determine that Spurlock's personal value sits on the nexus between "mindfulness and playfulness." This proves to be the right fit for some hip, aggressive brands such as Mini Cooper and Jet Blue. Plenty more companies flatly reject him or fail to return his calls, generally denying us the big "gotcha" moments that expose the empty suits for the soulless boobs we presume them to be. Most of the business people on camera seem pretty reasonable, though a few are prone to headache-inducing, market-tested MBA blather.

Spurlock smugly seems to enjoy biting the hands that pay him, and treats the whole exercise with amusement. For instance, he can't help milking some cheap laughs out of the indelicately named truck stop and fast food chain called Sheetz. He even manages to sell the chain's bosses on tie-in collector cups that shout "Holy Sheetz!" There is an impish twinkle in Spurlock's eye when he interviews Ralph Nader, the granddaddy of consumer advocates and the pioneer of self-promotion, and keeps interrupting him to plug the extremely comfy shoes he's wearing. Then, the ever-pop-culture-conscious Quentin Tarantino relates that he wrote certain sponsors right into his early scripts, but his heady mix of violence and humor was too much for the family-friendly chains.

In a mildly ironic twist, Spurlock, famously the bane of the fast-food biz, actually lands a health food drink as his main sponsor, and ends up constantly guzzling nutritious pomegranate juice. The theme here is far more nebulous here than in Super Size Me, which drew dead aim on an obvious target and had a sardonic good time slaying it. The big knock on Greatest Movie is that there is probably less truly relevant material than there is screen time; and the tension of a filmmaker stretching begins to show through. Still the point is made, and food for thought is made easily digestible by the cheerful tone; a revelation bought and paid for.