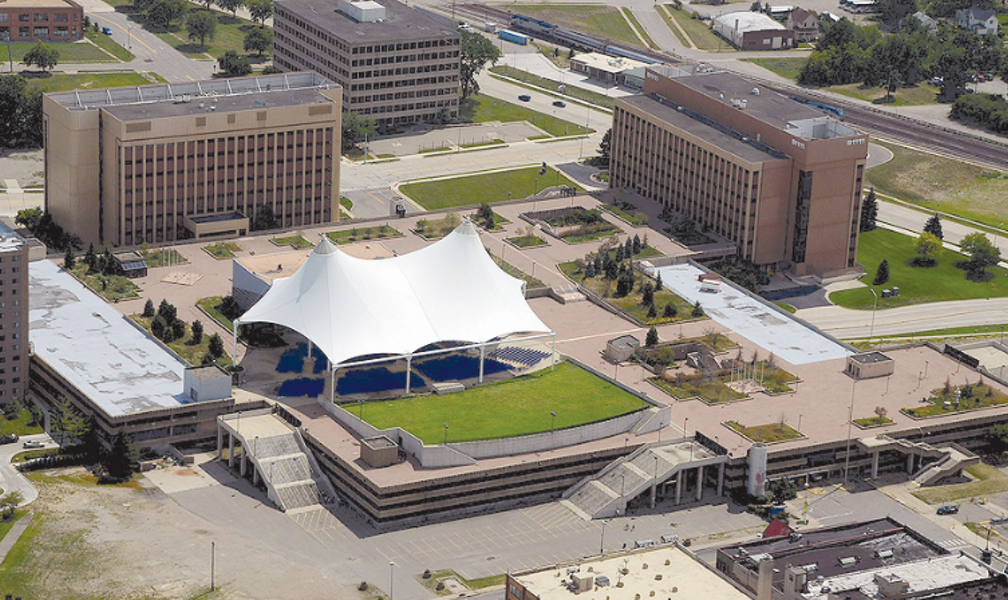 Will Rogers, an old silent film actor from the 1920s, once mused that "politics ain't worrying this country one-tenth as much as where to find a parking space."

In Pontiac, that's not entirely the case: Between 2008 and 2013, the city of 60,000 was run by three state-appointed emergency managers, a move that drew an intense opposition from local officials and residents.

In one of his most controversial moves, Louis Schimmel, the final EM who retired in August 2013, sought to tear down the Phoenix Center, a three-story city-owned parking garage and ampitheater that has been the source of intense litigation for more than two years. Besides the appointment of an EM, parking — in this case, the Phoenix Center — happens to be one of the most heated topics of conversation in town. It's a complicated, litigious affair that now involves a condemnation lawsuit filed by Pontiac earlier this year, which would use eminent domain to seize the property.

Initially, Schimmel made the decision to move forward with the Phoenix Center's demolition in mid-2012, according to court records. He argued the city would save more than $8 million in needed repairs and said it would trim tens of thousands of dollars from the city's annual budget. The owners of the Ottawa Towers, two office buildings situated adjacent to the parking garage, made an offer to deal with the Phoenix Center's upkeep, but Schimmel turned it down, according to published reports, citing a potential liability, as the city would still technically own the property.

Soon after, the move was contested in a lawsuit filed in Oakland County Circuit Court by the owners of the Ottawa Towers. That suit, which has since been stayed in light of the condemnation lawsuit filed by Pontiac, contended the decision to demolish the Phoenix Center would eliminate Ottawa Towers' parking spaces and violate the office towers' easement rights. The suit sought $9 million in damages.

Before leaving office, Schimmel filed an order, directing the city to seek an offer for the Ottawa Towers easement rights, according to court records, "for the public purpose of demolishing the Phoenix Center in the interest of public health, safety and welfare."

As the city's attorneys put it in a court filing, "To make a long story short, the City could not continue to operate or make the repairs required to make the Phoenix Center Garage operational."

The city offered to buy Ottawa Towers' easement rights for nearly $184,000, court records show, but the offer was rejected. In a brief, the city wrote the compensation would have paid for necessary repairs to the Towers, since the demolition would leave the buildings with gaping holes where elevated pedestrian walkways had been.

The Ottawa Towers rejected the offer, claiming Schimmel, as an agent of the state, held no right to tear down the parking structure. Several nearby business owners have supported the decision to fight, saying the Phoenix Center is an asset the city should see fit to keep.

"In my perspective, I think it's a great absurdity to knock down the Phoenix Center, and I've been looking for a way to reverse that process," says Blair McGowan, owner of the Crofoot, a Pontiac music venue on Saginaw Street.

So, McGowan says, a local group of Phoenix Center supporters banded together and decided to hold an expository town hall meeting on the structure. McGowan says that will take place on Saturday, Sept. 20, from 9 a.m. to noon.

"We can raise some question marks in the minds of key policymakers," McGowan says.

The Phoenix Center, which opened in 1980, sits in the middle of Saginaw Street near the Woodward Avenue loop of downtown Pontiac. Over the last decade, music promoters brought some life to the 292,000-square-foot deck of the structure, with major concerts being held at the Phoenix Plaza Amphitheatre, including rapper Wiz Khalifa and, before it moved to Royal Oak, the annual Arts, Beats & Eats event. In recent years, however, the most common sound in the structure is the hum and buzz of puttering motors in search of a parking spot.

McGowan says a solution would be to deed the parking garage's title to "somebody with a modest amount of money, with guarantees that it would be maintained and put on the tax roll."

That's why McGowan says he wants to open up further dialogue on the Phoenix Center's fate. As he sees it, "That could be the launch pad for more business, for more income tax, more citizens jobs."