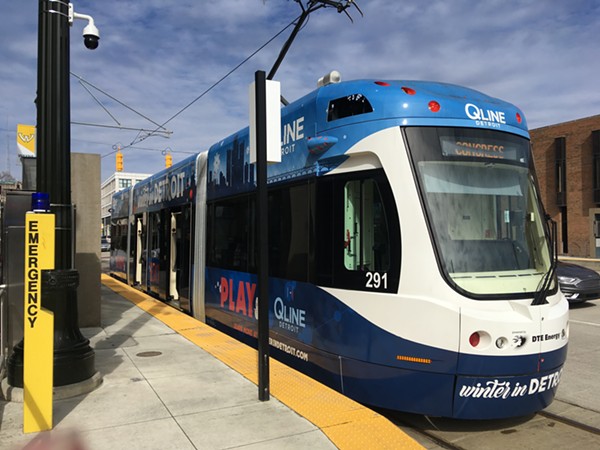 From the vantage point of Metro Times' new Midtown office, we've gotten used to the sound of the regular clanging of the QLine's electronic streetcar bell. We've also gotten used to a less frequent, yet not uncommon sight — that of a stalled QLine, delayed because a car has illegally parked on the streetcar's curbside tracks.

That decision to place the QLine curbside instead of in a dedicated lane gets a special focus in a new report on the streetcar that was released earlier this month, published in the Journal of Planning Education and Research and conducted by University of Michigan associate professor Joe Grengs and University of Illinois assistant professor Kate Lowe. The paper looks at how partnerships, or "P3s," have shaped the decision-making in projects like the QLine that use public funds — and determines the project was designed with the private business leaders' best interests in mind.

The QLine's operators, the M-1 Rail nonprofit — whose board is made up of a consortium of business, development, and civic leaders like Dan Gilbert, Roger Penske, Rip Rapson, and Susan Mosey — have not been shy about the streetcar's "curbside appeal." Streetcars have in recent years become well-known catalysts for development, with Portland's being considered a case study. M-1 Rail's own literature boasts that the QLine project has helped spur $7 billion in new investment along its route (this figure includes Little Caesars Arena, even though the planned sports venue pre-dated the QLine).

But Lowe and Grengs' report suggests this benefit goes to the business elite, including those who determined how the QLine would operate.

"Much of the economic development benefit is the increased property values that private landholders experience," the authors note. "Thus, it is not surprising that major landholders were among the backers and donators to the Detroit streetcar."

Much of the report is driven by 15 interviews with anonymous sources "from
the business, governmental, nonprofit, university, and media sectors at the local, regional, state, and federal levels." The report says business stakeholders were "underrepresented" among the interviewees, and that it also relied on "numerous plans and reports" in addition to "mainstream and specialty
media accounts."

The anonymous quotes, however, offer particularly compelling insights into the decision-making process behind the QLine. Of Portland's streetcar, one interviewee said:

"A group of people got on Penske’s private jet and flew to Minneapolis and Portland, one day. ... I’ve heard from many sources that Penske personally got under one of these streetcars ... and was really excited about the economic return on investment that Portland got from their streetcar, and said, 'We need to do this.'"


Of the debate to go curbside or use a dedicated lane, the report states:

A critical and contentious decision was where to place the streetcar in the roadway. Transit advocates favored an exclusive right of way in a center median, because of the speed that a dedicated right of way provides (by allowing public transit to pass private vehicular traffic). Contending that center alignment would better allow for eventually serving a larger, regional rapid transit system, transit advocates gathered considerable support during the environmental review’s public comment period: "The comments were like nine to one in favor of the center-running project, and that just doesn’t usually happen on public projects."


The report says that of public comments in an early 2013 review period, 11 of 140 "specified concerns about a side-alignment or a preference for center alignment." It also says that "no comments expressed support specifically for the side, shared lane alignment," and that "bicyclists supported center alignment, which would leave the right lanes free of rails that pose risk to bicyclists."

Nevertheless, M-1 Rail leaders pushed for curbside, according to one interviewee:

"M-1 Rail leaders were concerned that a center alignment would create a physical barrier to crossing the street and argued that a side-running right of way — in the right lane shared with regular traffic — would be better for supporting foot traffic and thus property values and local businesses."


And it was reportedly Gilbert in particular who pushed for side alignment, according to at least one anonymous source:

"Dan Gilbert, who has a very strong personality and is a big backer ... came out with some strong statements about how every place he’d ever been where you get the kind of economic development you want it side-running. Damn it, it’s going to be side-running ... it was a conflict of purposes really."


Of the decision to go curbside, one interviewee said:

"We were really baffled at why they [M-1 Rail] were so insistent about putting it on the side ... They were not looking for speed or reliability. Their goal was not to move people as quickly or reliably as possible ... their number 1 goal was the boost in property values and the convenience of attracting more people to local businesses ...The idea of moving people quickly and conveniently, or even moving people reliably, through this area was very much a secondary."


Another community comment that was apparently vetoed was a focus on improving Detroit's bus system. One interviewee surmised the decision was racially charged:


One interviewee felt the public outreach was lip service:

"They don’t listen to any of my advice. I think it’s giving me too much credit to say I’m actually in an advisory capacity. I certainly give advice. They never seem to take it, any of it."


And another claimed the decision-making was made behind closed doors:

"The decisions were not made in a public process. The decisions were made very much in a private arena. ... For the first year and a half that they were developing this, it was very secret. ... Even the factors involved, how they weighed different factors, let alone the actual decisions, were very much made by a private board of individuals."


Yet in defense of the secrecy, one interviewee explained:

"We were operating in this very quiet, under the radar way, because we didn’t want to promise more than we could deliver."


And another interviewee said it was less the business leaders hijacked the project for their own interest but rather that Detroit had a governmental leadership vacuum:

"In Detroit we had very poor local leadership when this started. Quite honestly, we had corrupt leadership, really poor leadership. ... If we had the stronger administration and local structure in place, I think they would have played a
greater role and taken a stronger lead."


However, M-1 Rail spokesman Dan Lijana disagrees with the premise that the nonprofit didn't have adequate community outreach, and called the report's authors' methods into question.

"It's a hack job," Lijana says, who charges that the authors "made no effort to speak to anyone at M-1 Rail about public involvement process or the P3."

"They never asked anything about any of the questions that they raised in here. They never talked to anybody on our board about the contents of this particular report," Lijana says. "I think as you read it you can see that they started out with a premise that they wanted to prove. And the ability to prove that was directly related to their unwillingness to talk to anybody with any on the ground experience."

He also thinks the anonymity afforded to the interviewees undermines their credibility.

With a final price tag of $187 million, the 3.3-mile (roughly 7-mile loop) QLine received $37 million in capital funds from U.S. DOT and another $10 million from the state. Private sector donors gave more than $100 million to the project.

Of community outreach efforts, Lijana notes that M-1 Rail's Vice President of External Affairs Sommer Woods was awarded the 2018 Transit Employee of the Year Award in recognition of her work in public engagement in transit planning. He points out that M-1 Rail had a community advisory board.

He also takes issue with the notion that the QLine represents a zero-sum game for proponents of improved buses or other wider regional transit. He points out that the M-1 Rail spurred the development of the Regional Transit Authority, and that the plan all along was for the Regional Transit Authority to assume the costs of the QLine in addition to a wider public transportation system. (A 2016 RTA ballot proposal which would have implemented a property tax millage across the four-county area to fund both proposals narrowly lost at the polls. M-1 Rail hopes to get another one on the ballot in 2018.)

"As it's noted in this report and well known everywhere, the M1-Rail board is in many ways responsible for the creation of the RTA in the first place," Lijana says. "The M1-Rail Board helped form some of the primary funding sources for the last transit effort on the ballot in 2016. This group of individuals has been outspoken, saying for years that the QLine was the first step toward a larger more connected regional transit system."

Initial reports stated the QLine had secured funding to operate through 2022, assuming it reaches ridership goals of 5,000 to 8,000 passengers per day. During an initial free ridership period last summer, ridership was reported to have reached 5,000 daily passengers. Once fare collection was implemented, this dropped about 40 percent to 3,000 daily passengers. M-1 Rail has not yet released updated ridership data, but Lijana estimates daily ridership hovered around 3,000 through the winter and expects it to pick up in the warmer months.