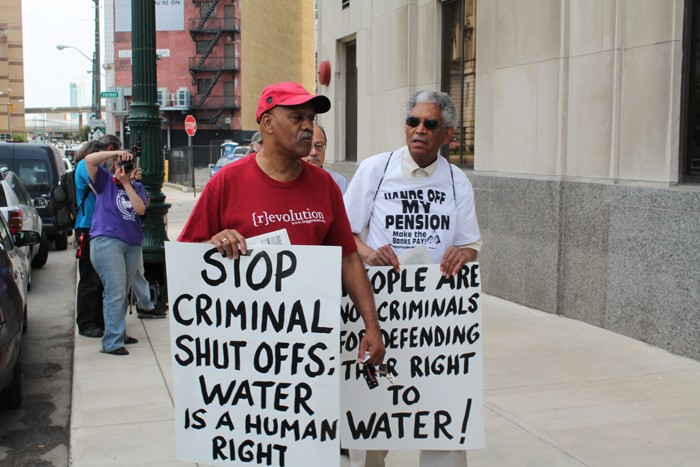 It’s been said that more than half of the accounts with the Detroit Water & Sewerage Department are delinquent. That’s why, in March, the department announced it had resumed efforts to shut off service to thousands of customers in arrears. The amount of outstanding debt, though, took plenty by surprise: a staggering $118 million between residential and commercial accounts.

But that’s not the reason a group of activists were outside the department’s main office on Randolph Street downtown last week.

In what’s been called the “Freedom Fridays” series, members of the groups Moratorium NOW, Detroiters Resisting Emergency Management, the People’s Water Board, and more have protested what they say are unfair residential account shutoffs — sometimes without notice.

As the Free Press reports, the average monthly water bill in the city is roughly $75. Those who have late bills can avoid shutoffs by entering into a payment plan, something roughly 17,000 customers utilize. If a customer owes $150 or more or is two months overdue, they’re sent a notice.

At a rate of 3,000 customers per week, that’s a massive number of people who are having their service cut — in some instances, the protesters claim, even without the opportunity to fill their bathtub for reserves.

What’s particularly egregious, they say, is the number of commercial properties with hundreds of thousands of dollars in outstanding debt owed. Those numbers “even surprised” WDIV Channel 4 in an April segment on debts to the department. An unpaid water bill of $150 pales in comparison to the outstanding fees of some big players in the city. As the segment reported, Joe Louis Arena owes roughly $80,000, and Ford Field about $55,000. Palmer Park Golf Club and the VA Hospital both owe an estimated $200,000. On top of that, the city of Detroit still has a number of vacant buildings gushing water long after being abandoned, as Steve Neavling of Motor City Muckraker reported last year.

So, does the water department have a plan to go after the corporations with overdue debt? We don’t know for certain, as Daryl Latimer, deputy director of the department and pointman on this issue, wasn’t in town at press time to comment. Latimer had this to say to the Freep last month on the protesters’ complaints, denying their claim that no one has been shut off without notice:

“Nobody’s been shut off without notice,” Latimer told the Freep. “By all means, we want to go after commercial properties. That’s where you get the most bang for your buck.”

Sure, that is, if you actually go after the commercial properties.

Though we couldn’t find anyone at the demonstration last Friday who had their water shut off to verify those claims, Ann Rall of the Michigan Welfare Rights Organization tells the Hits she recently started assisting a woman whose water was cut without warning.

“DWSD claims that they did send her shutoff notices,” Rall says, but “she didn’t receive warning. … In other words, she just came home, and the water was shut off.”

These scenarios have a deeper impact than simply living without water, Rall explains. For instance, some parents have to work to find housing accommodations to ensure that their children continue to have access to water, she says.

“These water … crises often will break up families even without the Department of Human Services actually getting involved,” Rall says.

The coalition of groups is expected to continue demonstrating outside of DWSD’s office at 4 p.m. on Fridays.