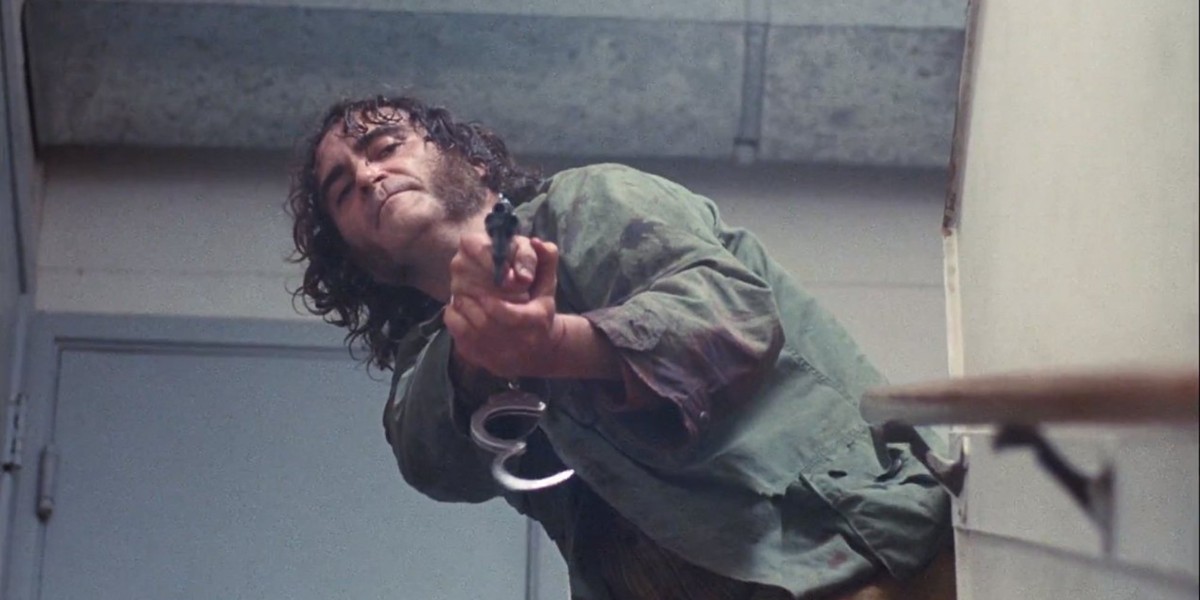 There’s a moment in Paul Thomas Anderson’s Inherent Vice when two characters discuss whether a swastika is a wise choice for a head tattoo. Joaquin Phoenix’s Doc Sportello points out the obvious anti-Semitic issues. His foil counters that the swastika is actually Hindu, a sacred symbol of auspiciousness. That brief exchange encapsulates Anderson’s recent preoccupation with dichotomous characters and the corruption that both — purposefully or inadvertently — foster. Though I can’t claim to know for certain that Inherent Vice is the third part of a trilogy in contrasts, it sure seems like a thematic exclamation point to Anderson’s previous two films, 2007’s There Will Be Blood and 2012’s The Master. In the former you had a brutal capitalist squaring off against a manipulative man of God, in the latter an animalistic misfit falls in with an articulate but repressed con artist. Together all three films explore America’s quest for a modern identity — the rise of the industrialist, the postwar search for self, and, lastly, the dawn of the 1970s Me Generation. And in each, two opposing forces simultaneously represent the promise and decay of American ideals.

In Inherent Vice, Anderson has found his antipodean Laurel and Hardy with Phoenix’s Sportello, a chivalric stoner private detective, and Christian “Bigfoot” Bjornsen (Josh Brolin), a hard-ass cop who hates hippies and enthusiastically violates civil rights. The two have an amusing love- hate (mostly hate) relationship that pretends to tie together a farcical plot that defiantly unravels every chance it gets.

The inspiration is clearly Robert Altman’s The Long Goodbye and the Coen brothers’ The Big Lebowski, with Anderson adding to the stoner private eye canon (if a handful of films can be called a canon) a mystery that’s impossible to solve and shady characters who intersect as much by coincidence as conspiracy. With his unruly mix of dissolves, close-ups, tracking shots and slow crawl push-ins, Anderson has traded the magisterial and ominous atmosphere of his last two films for something more playful.

Inherent Vice isn’t particularly funny, but it has a hazy, comic vibe that earns chuckles with its cutaways and asides. The best are the notes Doc jots down during his investigation, each one reflecting his addled internal state rather than any meaningful information. It’s Anderson’s smart-alecky riff on the hardboiled detective voiceover, with scribbles like “paranoia alert” letting us know that, through the haze of pot and nitrous, our hero recognizes the peril he’s putting himself into.

Recounting Thomas Pynchon’s novel-turned-movie is a little bit like explaining an acid trip. But here goes: Inherent Vice kicks off with Doc’s willowy ex-girlfriend Shasta (Katherine Waterston) dropping by one night for advice. She’s the mistress of Jewish real-estate mogul Mickey Wolfman (Eric Roberts), who employs neo-Nazi bikers as protection and is in the crosshairs of his cheating wife. She and her boyfriend want Shasta to join them in a plan to commit hubby to a mental institution then divvy up his spoils. Shasta’s on the fence. The very next day, a completely different client wants Doc to collect money owed to him by none other than Mickey Wolfman. Coincidence? Maybe. But Shasta and Mickey have disappeared, and soon after Doc is framed for murder.

With Brolin’s Bigfoot simultaneously partnering and pounding on him, Doc’s quest for the truth quickly spirals out of control, bringing in a long list of individuals with agendas of their own. There’s a musician (Owen Wilson) who’s left his family and faked his death, a straitlaced but scheming assistant DA (Reese Witherspoon) who’s sleeping with Doc, a sleazy dope-peddling dentist (Martin Short) who’s “helping” a runaway teen heiress, and a shadowy organization called the Golden Fang. Each encounter is colorful and brief, drifting through Doc’s investigation like smoke from a spliff. Why singer-songwriter Joanna Newsom pulls double duty as the film’s narrator and Doc’s personal confidante is as unfathomable as the plot.

What holds it all together is Phoenix’s chameleon-like ability to convince. Filmdom is littered with showy, poorly acted states of insobriety, but Doc is the real deal, a perpetually stoned hippie who, like all noir heroes, lives by his own code. Behind the slurred sentences and red-rimmed eyes there’s both a watchfulness and nobility. Doc accepts that the system is broken but still believes redemption is possible. In the end, it’s what saves him from the rising tide of corruption and cynicism.

So, who does Inherent Vice blame for squandering the American promise? Was it the apathetic, self-absorbed druggies who abandoned countercultural idealism or the greedy, self-righteous bureaucrats who turned a blind eye to police state capitalism? Inherent Vice suggests that trying to point fingers is as meaningless as trying to uncover the secrets of the Golden Fang. The real answer is in the definition of title … and Paul Thomas Anderson’s entire film’s rationale: Objects deteriorate because of their fundamental instability.

Inherent Vice is rated R and has a running time of 148 minutes.