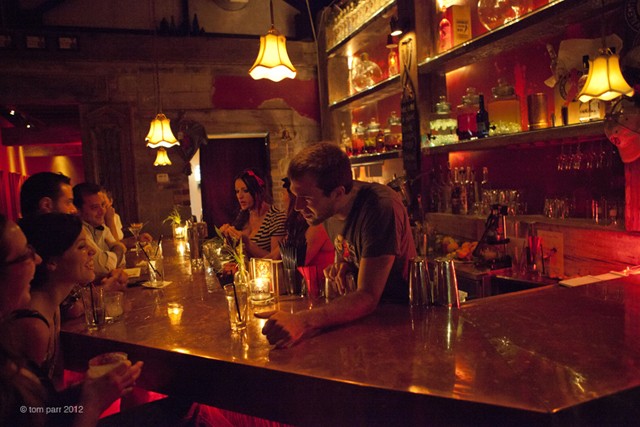 When we last checked in with Rifino Valentine two years ago, he was building out his distillery and tasting room, tucked away on a side street in a former pool table manufacturing facility. The 5,000-square-foot building was getting a new lease on life, rebuilt with ancient reclaimed timbers, some 12 inches thick, and windows and brick recovered from former Detroit warehouses. He was preparing to install a gorgeous batch still from Portugal made of hand-pounded copper. The storefront space roughed out, ready to house a 1,000-square-foot tasting lounge for his Valentine Distilling Co.

Just two years on and the dream is not only complete — it's expanding. Valentine now has a brand-new 15-foot-tall still from Germany, many more tanks, and the storefront is more a cocktail lounge than a tasting room, an atmospheric space filled with couches, high tops and a gorgeous copper bar, with views into the distillery. And the quality of the drinks served is paramount for Valentine.

"Cocktails are a focus," he says, "and so is using fresh ingredients. You're not going to find canned juices here. We fresh-squeeze oranges, lemons and limes, and in our infusions we use as local ingredients as we can — real, natural ingredients. This whole mixology thing that has been catching steam in last few years or so, we kind of wanted to step away from that a bit. For instance, instead of five or six fancy ingredients in a cocktail, sometimes just the simplest preparations and freshest ingredients make the best cocktail, when you let simple flavors work together."

That emphasis on quality isn't just at the distillery's bar; it permeates the company, and Rifino Valentine's vision for building up manufacturing in Michigan, creating excellent products in a gritty environment.

"The philosophy is the same as with all of our products. That philosophy is: doing things the way they were meant to be done. It sounds trite, but so many things nowadays aren't done that way. The type of distillation we do is centuries-old but really revolutionary nowadays, because it's costly, it's time-intensive, it's labor-intensive. But that's how we're able to work out of this 5,000-square-foot facility and able to compete and beat the biggest companies in the world — because we take the time, use good ingredients, and do things right."

Rifino is referring to a recent rating Valentine Vodka received from Anthony Dias Blue, editor-in-chief of The Tasting Panel magazine, as one of the top vodkas in the country — getting a 94-point ranking that placed it above such noted international brands as Belvedere, Ketel One, Grey Goose and Absolut. Earlier this year, Valentine Vodka also won a Gold Medal at the San Francisco World Spirits Competition. And those are just this year's honors.

"That 94-point rating from Anthony Dias Blue. I set high standards for myself when I set out to do this thing, but that really blew me away. To beat some of the biggest companies in the world was really truly amazing."

Though Valentine says he has plans to branch out a bit — a Valentine gin is available in the tasting room, and some other products are in the pipeline — vodka is a passion he's committed to.

"Vodka is the most challenging to me. There's no room for error. If you make a mistake in any step in the process, it'll show in a vodka, because it's the cleanest, purest form of a liquor. Lot of people think it's just boring, but for me, as a distiller, I think it's one of the most challenging. With whiskey, there's room for error — just throw it in a barrel for three years and hope the mistakes go away. But I would rather do a few things really well." —Michael Jackman