Rage against the machine

The mayor held a meeting to hear from residents. They gave him an earful. 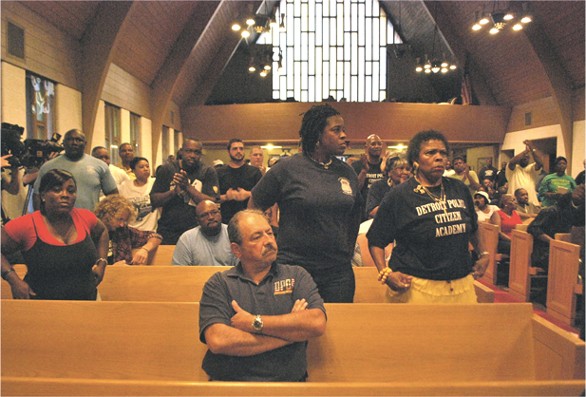 They came full of anger, and brought with them a long list of grievances. Tonight, the target of their fury would be placed before them on a stage. And by the end of the evening they'd drive him from the room.

The occasion was Mayor Dave Bing's fifth District Community Meeting with city residents, held Sept. 13, at Charity Lutheran Church on Kelly south of Seven Mile. The people who came to the event would not be those Bing is normally accustomed to mingling with inside the protective cocoon of his high-rise office. Tonight the room would be filled with people from "the neighborhoods," the catch-all term for the large swaths of the city characterized by untended parks and abandoned houses and stubbornly high crime rates.

They came not to pose questions, but instead to vent their rage, to get their pound of flesh from the man they accuse of destroying the city and handing the remains to outsiders. This would not be an evening of civil discourse.

"We don't usually have the opportunity to have a mic in our face," said Wanda Jan Hill, a retired city employee who was eager to confront the mayor. "They don't listen to the people. They listen to the shakers and the movers, that's all you hear about, but you don't hear about the ordinary Jane or John. And we need to be heard."

The meeting opened with a prayer by the church's pastor. It was the only quiet moment of the night.

Before the mayor arrived, nearly two-dozen department heads filled out the seats on the stage and the first few pews in this little church, while several members of the mayor's executive protection unit stood off to the sides.

Kirk Lewis, Bing's deputy mayor, rose to the podium amid a wash of hisses and boos, and had the department heads stand and introduce themselves. Some of them drew indifference from the residents, others brought a smattering of boos.

There were dozens of Detroit cops in the audience, as there had been for previous community meetings with the mayor. They were here to protest the succession of cuts to the department, the proposed 12-hour shifts, the shortage of equipment and manpower. Suddenly they began to shout, "No police, no peace!" and the whole room took up the chant.

Lewis wasn't having any of this. "We're not going to get very far with these outbursts," he lectured. "This is very disrespectful to the community. Thank you. Now, with that, I'm going to introduce Mayor Dave Bing."

The mayor walked onto the stage, and the crowd erupted into a throaty, sustained "BOOOOOOOOOO!" The department heads in the pews looked to one another, and in response they all stood up and began applauding theatrically towards the mayor. This defiant gesture only further inflamed the crowd, and the boos grew deafening.

Here now, seated before the people, was the man in charge of this ailing city, someone most people only ever see on television. The stage was left unlit, as if the shadows afforded some protection from the crowd's ire. The City Charter requires seven of these face-to-face encounters between the mayor and his constituents each year — one in each of the seven new City Council districts — otherwise he would likely have preferred to have been somewhere else, anywhere else. After four previous meetings like this, Bing knew what to expect. He sat there exposed and vulnerable, with the look of a man about to undergo a root canal.

Question time began. Each resident had to fill out a card beforehand, and mayoral staffers hand-picked which questions could be asked and then called upon each resident to come to the microphone for two minutes. A Bing staffer kept time with a stopwatch, and held up printed cards noting that a minute had passed, followed by one that said, "Time is up." But few people had actual questions, and few adhered to the time limit.

The audience members did not pussyfoot around their feelings. The first speaker addressed Chris Brown, the city's chief operating officer. "I'm going to be honest with you. Seriously, you make me sick," he told him, without specifying why, other than noting his high salary.

The room hushed as Bing leaned into his microphone. But instead of addressing Cummings, he turned to his group executive of planning and facilities. "Karla Henderson, if you would, would you give some overview and an explanation of what we're doing?" This infuriated the audience.

"He asked you the question!" a woman shouted from a pew. "Bing! The question was directed at you! We pay our taxes, we deserve to get answers. You got to answer him." Henderson began to speak. Someone shouted, "Who's the mayor here?" The crowd drowned out Henderson's words.

Bing stepped in. "It's very difficult to deal with so many people yelling and screaming at the same time, so if you ask a question and we can hear the question, we'll answer the question," he said in the tone of a sighing grandfather. "Let me hear the question that you want answered."

Cummings repeated his question. Bing moved forward to speak. "We as a community need to do that collectively," he said. "Who is doing the shooting? Who is doing the killing? It's people in your neighborhoods." This sounded like a blame-the-victim answer, and the audience howled bitterly. Bing tried to bring order. "It's very difficult to respond when everybody's yelling and screaming," he said again, hopelessly trailing off.

This wasn't a gathering of frustrated residents voicing their concerns. It was a public flogging by a red-faced mob. The object of their outrage was cornered, their hostility was personal, and they were determined to make him suffer while they had him there.

Sandra Hines, a 58-year-old community activist, stood and whipped the crowd up by launching a brutal volley of accusations, charges and insults at the mayor.

"I listened to you on the radio and you made a statement about the city's been in this shape for 30 to 40 years, and why didn't people step forward in the 30 or 40 years," she thundered. "You've been here for 30 or 40 years, why didn't you step forward? You stepped forward when your business failed and you was looking for a job. You weren't concerned about Detroit, you weren't even living in Detroit, and you talk about what we've done? We've paid taxes, mayor, we provide the money. It's not our fault as citizens that people like you guys that we put in take the money and jack it and we don't get nothing from it!" Her rant brought the entire crowd to its feet in applause.

One angry resident after another walked to the microphone. Not one of them had a kind thing to say about the thin, elderly man on the stage, who looked annoyed, yet shaken, as he sat there. His department heads sat slumped, faces sunken, as if withering under the weight of the crowd's wrath.

At times, Bing seemed drained, and offered vague platitudes. "As you talk about blight in the neighborhood, there are plans to eliminate blight," he assured one resident, who was demonstrably not assured.

Mostly, the crowd simply shouted complaints — about Belle Isle, about a state takeover, about abandoned homes and cuts to the police force. "I do not know what you can take away from us next," Valerie Glenn stated. "Our children are not being educated, we have no security, we have no streetlights, we have no food in this city. I don't know what is going on, but I am very concerned."

"I love this city and you are destroying it," said Cecily McClelland. "Why don't you do us a favor and leave?"

Lewis finally heard enough. "That was the last question, and that closes our public portion of the meeting." He announced that the mayor would make his closing comments. But the crowd wouldn't stop yelling.

Then the mayor rose to his feet, his staff stood up, and they all walked into the back room, out the door, into their cars and drove off. And that was it. He'd been there less than an hour.

Outside, the cops and the residents and block club captains milled around after the meeting's abrupt end. Now they turned their focus to hounding the mayor's staff as they headed into the parking lot. Hill, the retired city employee who'd come to berate Bing, chased down Brad Dick, director of the city's recreation department. "Do you live in the city?' she yelled after Dick, who maintained a brisk walk back to his car without looking back at her. "Do you live in the city?"

Her taunt reflected one of the fault lines that defined the residents' outrage — the powerful versus those who feel powerless, downtown versus the rest of town, festering resentments over race and geography and income. Them versus us.

Though the mayor didn't stay long, and though none of his answers pacified the crowd, most of the residents got what they came for — a chance to berate those in charge and a collective release of long-simmering frustration and fear.

"Detroiters have been beat down for the last six or seven years," Hill said. "How many times do you have to get hit before you say, 'Ouch?' So we're saying, 'Ouch.' We have to make some noise and let him know. Shame on us if we just sit back and watch."