Ramalamafafafa: Why you need to donate to the ‘CREEM’ film’s Kickstarter campaign 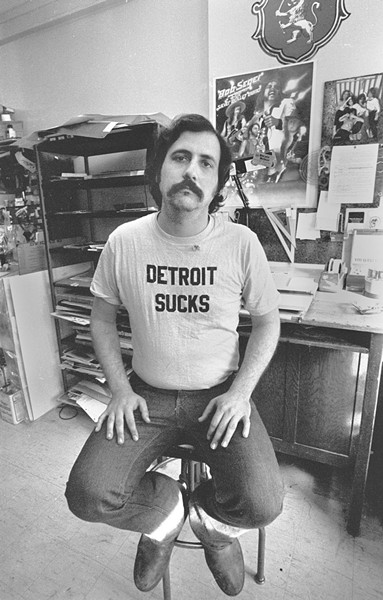 Lester Bangs in the ‘CREEM’ offices. Photo by Charles Auringer.

We first broke the news about the forthcoming CREEM magazine documentary late last year. CREEM (1969-well, depends who you talk to) is a super strong part of the Detroit area's cultural legacy. Not only did onetime editor Dave Marsh coin the term "punk rock" in its pages in 1971 (while writing about ? and the Mysterians), but a lot of important writers got their first international publication in its pages, including Patti Smith, Ben Edmonds, Peter Laughner, Sylvie Simmons, Nick Tosches, Rob Tyner, Laura Levine, Greil Marcus, and the notorious Robot A. Hull. Infamously, Lester Bangs became the magazine's editor in 1971 and, after moving here, fell in love with the city. He even called the place "rock's only hope," and remained in the Detroit area for five years.

The film is to be directed by Scott Crawford, whose Salad Days is a really solid look at the hardcore punk rock scene in Washington, D.C., during its 1980s heyday (the screening at MOCAD last year was a highlight for us). The Facebook page for the CREEM film lists Wayne Kramer, Jaan Uhelszki, Alice Cooper, Lenny Kaye, Bebe Buell, Iggy Pop, Bob Seger, Mitch Ryder, KISS, Bill Holdship, and Dave Marsh as people to be featured. This looks like it's really going to be a good one, folks. As the online funding for the film enters its final stage, Metro Times spoke with director Scott Crawford.

Metro Times: Why make this documentary? How has it differed from working on your D.C. punk film Salad Days?

Scott Crawford: This is a story I've been interested in telling for years now. There are some parallels between the two films, I think. Both are real underdog stories. CREEM was started by a small group of like-minded "misfits" who wanted to make an impact in their community. And it gradually grew into a magazine with an international footprint. The same could be said of the Washington, D.C., punk scene in the 1980s.

MT: How receptive have the writers and musicians been to being a part of this so far?

Crawford: So far everyone has been pretty receptive to the idea of sitting down for the film. CREEM seems to evoke a smile from those that were fans of it — it was a magazine that musicians and fans respected equally.

MT: Who would you love to feature but haven't scored a definitive answer yet from? Who's the dream person to talk to?

Crawford: Unfortunately, many of the "dream" interview candidates are no longer with us. David Bowie and Lou Reed would've had some pretty fascinating things to say, I think. John Lydon and Iggy Pop are two of the ones at the top of my list who invoked the same outsider spirit that CREEM did itself.

MT: Do you ever imagine Lester Bangs over your shoulder while working on this thing — like "What would Bangs think/do"?

Crawford: Oh, sure. Telling this story is no easy feat — there were so many big personalities involved in making the magazine what it was, getting it "right" will be all-consuming. Lester would be pretty suspect of a doc, I'm sure.

MT: What are your earliest/best memories of CREEM?

Crawford: I discovered CREEM as a kid. My father and I used to go the newsstand every weekend, and when my interest in music kicked in, I gravitated toward Trouser Press and CREEM. We found a box of old back issues from the '70s in the store one day, and bought dozens of them. Some of the pages ended up as posters on my wall.

MT: It's interesting how, in helping to promote your crowdsourcing, its chief rival back in the day, Rolling Stone, describes CREEM as "the legendary Detroit music magazine that focused on the outer fringes of rock and took pleasure in knocking artists off their pedestal." Clearly they were two different mags. How do you define CREEM yourself?

Crawford: CREEM was kind of the bratty, younger brother to Rolling Stone. They took pride in their Detroit home base — it wasn't a media hub like San Francisco or New York, and I think that allowed for a certain freedom. Their editorial slant was at times free form, anti-establishment, and at other times profane.

MT: To what extent, if any, does the doc focus on the contentious later iteration of the magazine?

Crawford: The film will really focus on the "heyday" of the magazine starting from its launch in 1969 until the death of the publisher Barry Kramer in 1981. But it will capsulize the rest of the decade in some capacity. CREEM was always contentious. It was one of the things that fueled the offbeat creativity. There seemed to be a constant battle between art and commerce, and I understand that no one ever really got along. The fights between staff members were legendary, and who will forget Lester's battle royales with Lou Reed? But in the end, out of that combative environment, there was revolution in rock journalism.

MT: As of this writing, you are more than four-fifths of the way toward the fundraising goal of $100,000. What will the funding of the film cover? How easily have you slept the last few weeks since the Kickstarter launched?

Crawford: The funding we need will cover things like music licensing, archival footage and photography, insurance, travel, and post-production expenses. Sleep? In the words of Warren Zevon, I'll sleep when I'm dead.

MT: Have the Kickstarter people been behind it?

Crawford: Kickstarter has been very supportive of the film, and have really gotten behind it in a big way. We'll be a featured film on their home page this week. They are really an incredible source for filmmakers like me.

MT: What will you do with any extra funds you get?

Crawford: Any additional funds we receive will go to the music licensing costs, which I expect to be our single biggest expense. You can't have a film about CREEM magazine without having a loud, obnoxious soundtrack.

To learn more about the film and check out the video for their fundraiser, go to facebook.com/creemmagazinedocfilm.