Deppth charge: Or just another Chinatown for kiddies? 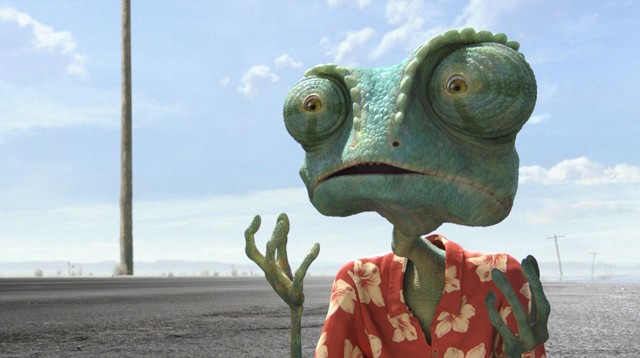 These days, computer animated movies aren't really for kids. Though DreamWorks, Blue Sky and Pixar are mindful that tots will be in tow, their pixelated blockbusters are pitched toward hipster parents, thirtysomethings who don't want to grow up, and post-collegiate fanboys. With adult themes, clever plotting and sophisticated cultural references, such movies as Wall-E, Ratatouille, Shrek, Despicable Me and The Incredibles deliver enough gags and action to keep the wee ones entertained, but firmly aim dialogue and thematic explorations at the drinking-age chaperones. Toy Story 3, with its Great Escape plotline and fiery confrontation with mortality, may have engaged my kids, but they don't ask to rewatch it nearly as often as Monsters, Inc, Finding Nemo, or even the latest direct-to-video Scooby-Doo flick. Read the gushing reviews that critics heaped upon Up and it becomes clear that they were evaluating it as adult entertainment, not on behalf of the children who were dragged along. And there's no foul there. But ask a kid to choose between it and the universally panned Furry Vengeance and the outcome is less certain than you might think.

The best films of this CGI genre bridge the gap between adult and youngster, paying careful attention to the needs of both. Kung-Fu Panda is probably the best recent example. Mega-Mind is probably the worst.

So, what to make of Rango, with its hyperactive action sequences and amazingly photo-realistic critters? For most of the movie, my kids watched with the slacked-jaw intensity of a 16-year-old at a strip club. But the next day neither spoke a word about the flick. For as frenetically action-packed and insanely clever as Gore Verbinski's SpaghettiOs western is, it whole-heartedly casts its lot with the grown-ups in the audience, paying homage to Sergio Leone, Carlos Castaneda, Hunter S. Thompson (Raoul Duke and Dr. Gonzo make a surreal appearance), and Roman Polanski's Chinatown. Yup. Chinatown for the kiddies. The idea would be utterly preposterous if Who Framed Roger Rabbit hadn't tried to do the very same thing 23 years ago.

So, let's dispel the illusion that this movie is for kids. After all, it reteams Johnny Depp with his Pirates of the Caribbean director, and boasts a screenplay by John Logan, who penned Gladiator, The Aviator and The Last Samurai. Even the incredible animation is handled by the traditionally adult FX house Industrial Light and Magic (their first full-length animated film). Dense and dusty, Rango's astonishing visuals look three-dimensional without needing the awkward glasses. The animal characters are amazingly (and creepily) lifelike and the expressionistic vistas will take your breath away (A-list cinematographer Roger Deakins acted as an adviser).

Dressed in a Hawaiian shirt and given a Ralph Steadman crook to his neck, motormouth Rango (voiced by Depp) is a domesticated chameleon who gets accidentally stranded in the Nevada desert. There he stumbles upon the frontier town of Dirt, where the citizens are struggling with the worst drought in their history. Convincing them that he's a fearless gunslinger, Rango is appointed sheriff after he accidentally defeats a marauding hawk. Then, with the help of an iguana named Beans (Isla Fisher), he tries to figure out where the town's water went and why the avuncular mayor, Tortoise John (Ned Beatty channeling John Huston), is buying up all the land. And, in the best Don Knotts tradition, Depp's protagonist, a clueless drama queen, is way out of his league.

Rango's overstuffed yet clever plot parades a long line of inventive movie moments, milking classic western themes for all they're worth. From Shane to The Man With No Name, Verbinski shamelessly exploits the genre's iconography while keeping the kiddies happy with eye-popping set pieces and comedic chases inspired by the late, great Chuck Jones. One of the best is an aerial assault by bat-riding bandits that plays like a demented outtake from The Road Warrior. But so obsessive are Rango's movie references that the scene is accompanied by a banjo arrangement of "Ride of the Valkyries."

Despite all its infectiously unbridled chaos, Verbinski struggles to integrate the film's competing instincts and too often torpedoes the humor. Worse, he forgets to rein Depp in, letting the charismatic actor get carried away with a wackiness that verges on the exhausting. Rango's awkward (and unfunny) opening monologue immediately makes clear the movie's limitations.

Luckily, the moments that don't work are quickly forgotten, as the filmmaker tosses in a masterfully executed action scene, or better, another weirdo film-school influence. Sure, your kids won't catch the references. But who cares? They were written for you, not them.