Rapper J.Jackson on why Detroit is still home 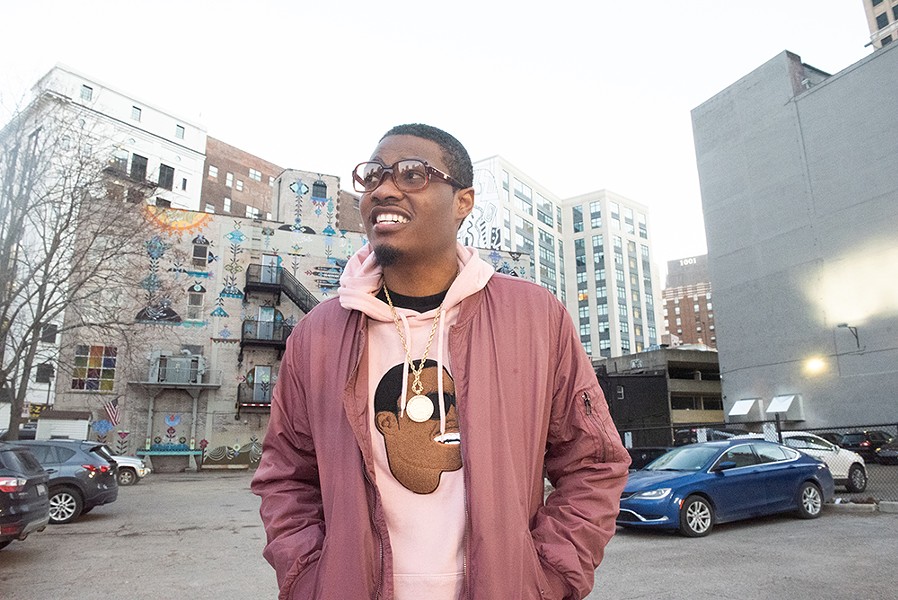 J.Jackson, a rapper and Detroit native, meets us at downtown's Julian Madison Building dressed in light denim jeans, a dusty peach bomber jacket, and a salmon colored hoodie with his own mug embroidered in the center.

"I've been rapping for as long as I can remember," he says. "My older sister was a huge 'Pac, Jay-Z, and Biggie fan. I can remember being 9 years old calling in to FM 98 for roll call and freestyling on that."

Jackson was raised on Detroit's east side and says he grew up down the street from Eminem "I met him in seventh grade," he says. "He came through and signed autographs. That was actually the day he shot the cover for The Marshall Mathers LP. I was hooping with my homies and everybody was like, 'Eminem over here.'"

"It was rough, but we didn't know it was rough because it was everyday for us," he says. Although J. was surrounded by street violence and hustlers growing up, he managed to steer clear of it. "A lot of my uncles, cousins ran the streets pretty heavy. So I saw the ballerific lifestyle through them, and I knew that wasn't me," he says, shaking his head.

"So many kids were just like me," he says. "They weren't that street dude, but they were familiar with it because they were around it. If you don't have guidance, you'll second-guess yourself. Then you'll think you can go play with the wolves, 'cause if you ain't a wolf, you'll get caught up. If it ain't for you, you will get exposed."

Jackson went to Osborn High School, where he was briefly in a hip-hop group called Get Money Boys with Icewear Vezzo (who called himself Young Vez at the time), Green Guy, Chief Reaper, and Don Veto. The group made one CD before everyone went their separate ways. "We were just high school kids rapping, just getting started trying to make our mark on the game," he says.

Jackson graduated from high school in 2005, enrolled at Wayne County Community College, took a job as a cashier at Receiving Hospital, and eventually got into a surgical tech program. He used his earnings to stabilize himself and was able to finance his aspiring music career. By 2010, he had made his first major spark when he dropped with Detroit legend Miz Korona. "The Game with Miz Korona was my first serious joint," he says. "It was just a good look, and that's what let me know that I could take this thing to another level. I was moving around, and there were a lot of cats who respected my lyricism."

Jackson released another single with Marv Won and decided it was time for a break to reassess things. "I spent a lot of time learning about branding, marketing, quality," he says. He worked with Art Direction, a team of directors, producers, and strategists founded by Lawrence Lamont that have worked with Big Sean, Disney, and Nike.

Jackson re-emerged in 2013 with a fresh approach and a plethora of good music. He worked with Jay-Z producer Ski Beatz and released several singles, many of them part of the #ThrowJack Tuesday series. "My friend in California reached out to him (Ski Beatz)," Jackson says. "I met him and Dame Dash, and me and Ski began working together," he says.

Jackson is the kind of emcee that places high value on lyrical cleverness and storytelling over raw boom-bap beats; part Elzhi with a strong dose of Dave East. He's stuck with his approach to keeping himself relevant by releasing singles instead of the traditional mixtape approach. "I like to put out joints that keep the attention span of the people, versus putting out an album in January and then putting out a visual in March and people think it's over," he says. "I wanted to break up that approach."

Since then, Jackson has grown a cult-like underground following, and although he has had some serious sit-downs with major labels, he hasn't come across a deal he felt was worth signing. "When you sit down and go over the paperwork and they want the merch, and they want this, and that," he says. "Like, you can get 100 percent of $10,000, instead of 0 percent of $1 million."

In 2017 Jackson toured with Curren$y on the Pilot Talk Trilogy Tour, participated in the Keep the School Safe Tour in Detroit, and rocked SXSW in 2018. "I was at SXSW, I was behind the gate, I saw Danny Brown and Lil Yachty. At this time Lil Yachty was huge, Danny was next to him, A$AP Ferg, A$AP Rocky, and I was like, 'Yo Danny, what's up.' He didn't hear me and I told his guy to go tell Danny that Jackson is here from the east side of Detroit. He came over, he left Ferg and Yachty to come over and kick it with me," he says.

Jackson relocated to the East Coast five years ago, but still misses the camaraderie and synergy of Detroit. "I miss Detroit so much," he says. "But going out there, I've transformed mentally. I've paid attention to a lot of my bad habits."

On Aug. 7, Jackson will release his second documentary, Eastside Story: The Journey Part 2. In the film, available to watch online on Jackson's YouTube channel, the rapper reflects on his move to the East Coast, losing his younger brother to cancer, and his life as an independent artist.

"It was important for me to document this phase in my life because I know down the line that I'm going to need the reminder that I can have whatever I believe," he says. "But in the meantime, it's important to me that I'm an example of that to my hometown and to the people around me. We all need that."

You can watch the documentary below.