Readers react to 'So You Want to be a Detroiter' 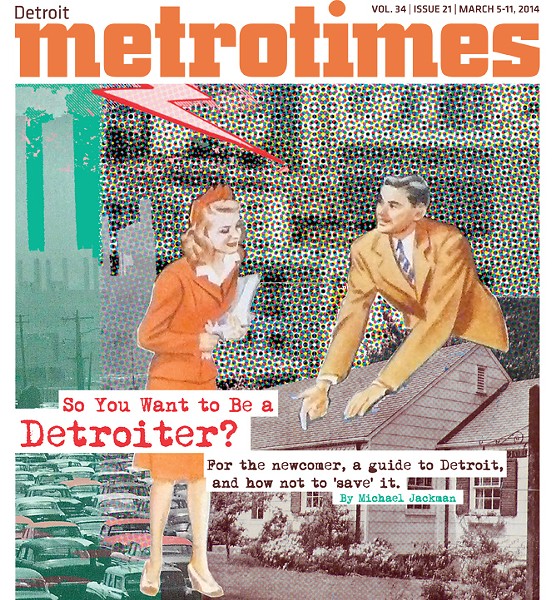 Detroiters speaking — and a note about coats

Re: “So You Want to Be a Detroiter?” — Michael Jackman should take a bow for a truly superb, thought-provoking set of interviews. He identified interviewees worth hearing and coaxed out meaningful, important conversations. This package reads like a transcript from a forum I’m glad I “attended.” Who needs TedX Detroit?

One amusing slip: Torya Schoeniger actually was speaking of “code-switching” between racial or social groups, not “coat-switching.” Come to think of it, though, that wording works metaphorically and is seasonally appropriate!

Congratulations on fine work Metro Times can be proud of. —Alan Stamm, Birmingham

An earnest, if misplaced, question

Thank you for these wonderful interviews — this should be reprinted in The New York Times and Wall Street Journal and all the other publications that pontificate about Detroit. I appreciate the passion and honesty of those interviewed. I am a 59-year-old native white Detroiter, and one of the last families forced to flee my boyhood neighborhood in the late ’60s, during the height of racial tensions. What seems to be missing in these interviews is any sense of responsibility of African Americans for the present state of affairs in Detroit. It must be asked — in a city controlled and governed by African Americans for the last 50 years, who is responsible for the long economic collapse? There does not seem to be an acknowledgment that the very real racism exists in white and black communities. To make matters worse, there is a perhaps understandable sense of resentment that white suburbanites are flocking back to the city right now. What suggestions would African Americans living in the deteriorated neighborhoods have for how to restart the economy of Detroit, other than an influx of new residents and new small businesses and new money? At some point those who have survived in Detroit these last 50 years are going to have to accept the reality that what has been tried has not worked. “Social justice” as discussed by Mr. Stone-Richards is a worthy goal — but as he stated it does not exist now and never has. Just as I was displaced, so will many more be displaced as things change yet again. —Brian K., Ann Arbor

We got a wealth of responses to our cover story, including the two above, which arrived both as letters and as comments on the story online. Some were thoughtful posts, some were angry trollers, but it struck us that what we’d call “misplaced questions,” such as Brian K.’s above, which rest on certain assumptions, make us realize all the more why we need these kinds of wide-ranging, no-holds-barred discussions. In the spirit of that, and judging Brian’s question to be an earnest one, here is the comment that answered it from our website, posted by Georgia Johnson:

No one ran you from Detroit in 1969. Your parents, like most whites, ran, because they didn’t want blacks living next to them. Let’s keep it real, meaning let’s tell the truth. Detroit was segregated like other parts of America, and blacks were not allowed to buy or rent in certain areas in Detroit. I am a living witness to this. Blacks were not in control of business or politics in Detroit until the early ’70s. Black people are not racist. We don’t own or control anything that affects any one way of life. You make it seem like there was no crime in Detroit until after African Americans were elected. But remember the Purple Gang? Some suburbanites are getting big tax breaks for moving into Detroit, after staying and not running, all while paying our taxes for more than 50 years, where is our break? My right to vote has been taken, the right some people died for, huh? How do you turn Detroit around and not include Detroiters?