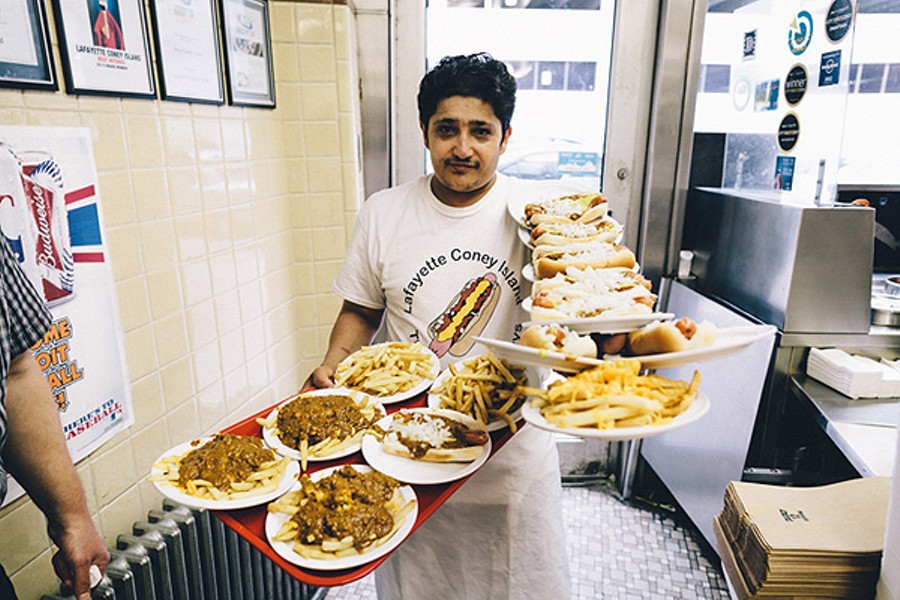 Our intern Lexa Prokopetz posted a blog and slideshow with photos taken by 20-year-old Sam Sklar, a West Bloomfield native who's attending college in Boston. Some folks were perturbed as the way Sklar is representing the city.

Reader "Kait Alvord" says: "Ballgames and hot dogs are not 'the real Detroit.' I get that this kid is trying to make Detroit seem 'cool,' but the truth of the matter is that it needs a lot of work and trying to make it seem cool is not going to get people to help."

Reader "FranktheMurph" says: "The 'real Detroit' is the 90 percent of the city that lies outside Dan Gilbert's little cocoon for millennials and yuppies. It's great that downtown, Midtown, and Corktown are thriving, but tell that to people who can't get a police car to show up when their neighbor gets shot on their porch. There's nothing 'real Detroit' about a gathering of suburbanites buying overpriced ballpark hotdogs and then racing back to Oakland County when the game ends."

Citizens make a Dent in taxes

Last week we reported that Floyd Dent, the man who was beaten by an Inkster police officer during a traffic stop in January, was close to finalizing a settlement with the city where he was allegedly brutalized. Many of our readers were concerned about where the nearly $1.4 million would be coming from.

Sami Salameh says: "Money talks, plus someone's gotta pay for the medical bills. If you really want to prevent these sorts things, start requiring more education from police, take away firearms for regular patrol officers. Other countries have police forces that put the safety of the people first and are trained on how to de-escalate situations. Perhaps they could be training our cops."

Rick Burris says: "It is the poor people of Inkster who will have their property taxes go up to pay for the settlement. Inkster is a community of mostly black families. So I guess he doesn't care that he is screwing so many black families in that community."

Tom Skonieczka says: "I thought this was about dignity, justice and improving police tactics ... how exactly will a monetary settlement attain this goal?"

Barry Matherly says: "The police have to have personal responsibility. Pensions need to be forfeit and their personal holdings need to exposed to civil liability. This shouldn't blow back to taxpayers."

Local singer Alison Lewis' dog Millie was shot at Navin Field last week by a Detroit police officer. While many rallied behind Lewis and hoped the best for Millie, others were feeling cynical that anything would be done by the DPD to correct the situation or discipline the officer.

Javier Juan Manuel says: "Animal abuse is not really a thing in Michigan or most states, half of Detroit has two, three, four dogs chained up in their yard, barely fed, no shelter or half-assed shelter, etc., sitting in mud in negative 20-degree weather. It's shameful.

Dog fighting goes on almost unchallenged, if it were not for money and the taxes they want their hands on, no one in power would care if people were not making money. If dogfights were for ribbons, no one would care at city, state, or federal levels.

Lastly with regards to cops killing dogs, this lady was not following leash laws — you can be at your own home, cops will not knock, raid the wrong house, and kill your dog with no repercussion, you can be in your own yard minding your business, and cops chase a guy into your yard, and they will shoot your dog in front of you in your own yard. Again, nothing happens, so good luck if you did one teensie, tiny thing wrong like not having your pup on a leash — that's all they need to totally dismiss you."

Steve Dudzinski says: "No leash — that's how Detroit police will try to get out of this one. Doesn't matter how incorrect the police report is, or that the cop is lying about what happened. They'll leave this one cop with an 'itchy trigger finger' on the streets to do this again, or worse. Next time it might be an innocent person that looks at him in an aggressive manner and — boom! By the way, I was 50 feet away from the cop when he shot Millie, and heard and saw what happened. The other officer that showed up I think knew that his partner had screwed up. He seemed shaken and meek when asking me for my identification. The shooting officer needs to be at least reprimanded and retrained to not be so jumpy when an innocent, playful dog comes near him. Take his gun away."