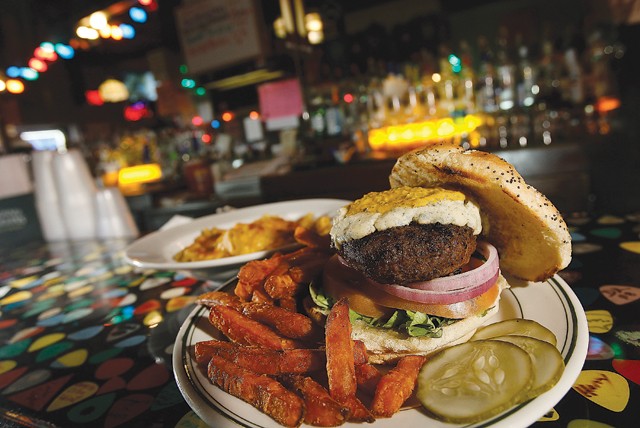 From the outside it looks like a hundred other neighborhood bars in the city — except for the red neon sign that nods at Detroit history: "Twilight Bar," a remnant of the renowned Alvin's.

The interior is like that of a hundred other Detroit neighborhood bars — tin ceiling, institutional green walls — except for the white tablecloths and flowers on the tables on Sundays.

PJ's Lager House could be like thousands of other little bars on run-down streets in Rust Belt cities, except for the fact that it books eclectic local and national acts that have made it one of the most popular small music venues in the city.

PJ Ryder, a former owner of PJ's Records in Ann Arbor, took the Corktown bar over in October 2007 and gave the "absolute dump" a major facelift; "you stuck to everything you touched," he recalls. "It's still just a bar," he says now, the modest words belied by obvious pride, "but people can feel comfortable coming into it." Covers are most often $3, $5 or zero.

I ran into neighbors when I visited at supper time, one of whom had grown up a couple miles west. The place had a neighborhood feel — a couple of Irish-twin babies were dandled on one party's laps on a Sunday evening — but as the skinny band members hauled in their equipment, it was clear the atmosphere would soon change to PJ's motto, "Live Life Loud."

The music part of the space is labeled "Jerome P. Cavanagh Social Room," with shamrocks, for the mayor and his Irish Catholic politician cronies who used to hang out here. Teamster officials once negotiated contracts at the end of the bar; Ryder says the tale is they had their own key for after-hours use.

It's doubtful the music lovers who come to get up close to the bands are aware of the history, yet doesn't it seem likely that it seeps in and makes a difference somehow?

I'd go back to sample more of PJ's everyday food: sandwiches, nachos, fish and chips, a vegan burrito, a couple of salads. Prices are good (add fries for a buck), and the only items not made in-house are the fries and sweet potato fries (well, not the buns, not the bread). Even deep-fried chicken strips are cut in the kitchen, not at Sysco.

The staff corns its own beef, producing a fine Reuben, here called a Corktown Classic, grilled on rye, topped with Swiss and very fresh cole slaw. It's just sweet enough from the house-made Thousand Island dressing, just short enough to be eatable in one sitting.

Also excellent is the Black and Blue, a burger grilled with blackening spices on one side and blue cheese on the other. It's spicy but mellowed out by the cheese — though blue cheese isn't mellow.

Other sandwiches are portabella, veggie burger, blackened catfish and "Louisiana-spiced" chicken. But the steak sandwich, though topped with agreeable grilled onions, was way tough, almost untearable with the teeth.

A fabulous soup is potato-poblano. We were told there was just one serving left in the kitchen, but they could have divided it and sold it twice. It's smooth and creamy with a little kick.

Onion rings have a slightly salty crust, and lots of it, that fits well with the sweet onion interior. A big serving of sweet potato fries, crisp, with just the right amount of fat, comes with a six-pack of sauces including A-1 Sauce, Sriracha and malt vinegar.

The disappointment in the sides was mac and cheese, a huge glutinous glob of pasta with orange cheese only on top. Stir in the cheese!

On Sunday, when PJ makes gumbo and the tablecloths come out, prices go as high as $14.95, which includes a lovely salad. Recently, it included free acoustic music too, Lac La Belle on guitar, banjo, mandolin and accordion. Our salad contained blue- and raspberries as well as grapes, plus blue cheese and pecans, for an appetizing combo of sweet and pungent. There was too much vinaigrette, but it was a light one.

PJ says his Sunday recipes are copied after the New Orleans restaurant Uglesich's. Barbecued shrimp, cooked with potatoes and tomatoes in a lot of butter, was not spicy at all, and apparently not intended to be. Voodoo shrimp meant black beans and kalamata olives, which were interesting because we're not used to eating them warm.