Recreational marijuana dispensaries in Michigan rang up nearly $440 million in sales in their first year of business.

Since the adult-use market launched on Dec. 1, 2019, 191 recreational dispensaries have opened, generating $73 million in excise and sales taxes for cash-strapped local governments and the state, Crain’s Detroit Business reports.

After a slow start and a demand that far outpaced supply, the market has picked up steam, with sales increasing every month, reaching $59.7 million in September, the last month for which figures were available.

There’s still plenty of room for growth. Of the state’s 1,764 communities, only 84 permit recreational marijuana sales. Additional communities are expected to legalize recreational sales after observing the market.

Detroit, the state’s largest city, finally approved an ordinance to allow recreational dispensaries to open last week. The city estimates the dispensaries will generate $7-$8 million in new taxes for the city.

Unlike medical cannabis, recreational marijuana has a 10% excise tax and a 6% sales tax. Excise tax revenue goes to local governments, schools, and roads. Last year, the Senate Fiscal Agency projected recreational marijuana would rack up $150 million in sales and excise taxes in the 2020-21 fiscal budget, which began in October. By 2022-23, the agency estimates the tax revenues will reach $262 million. 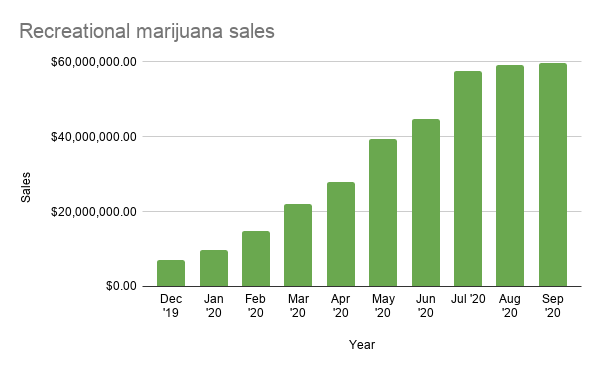