The commies are coming! — Nothing makes much sense in this reheated Cold War epic 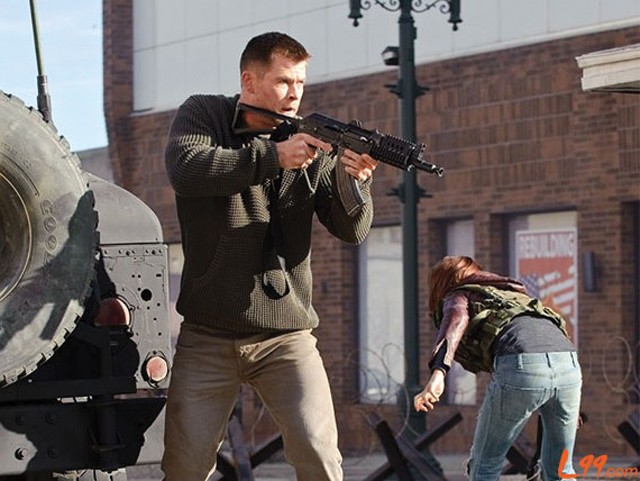 The original Red Dawn, a cheesy affair even upon release in 1984, has grown into a laughably anachronistic absurdity; it's a pumped-up artifact of last-gasp rah-rah Cold War hysterics, which came just as the Soviet Union was rapidly eroding from the inside.  Now, the agenda of this barely tolerable update is more nebulous, tapping into the vague jingoistic paranoia of talk radio shouters, who peddle and exploit the notion of an America in decline for ratings boosts. Not that politics, or much of anything other than cheap thrills is on the mind of this empty-headed war-is-heck thriller, which assembles an attractive young cast and throws them headlong into a ludicrous fantasy about the homeland under siege by a full-scale commie invasion. The closest the film comes to explaining or justifying the invasion is a grumbled line "This was bound to happen eventually." OK, whatever.

This pointless remake was delayed for many months, due to corporate wrangling over MGM's bankruptcy, and other shenanigans, notably an attempt to appease the Chinese box office by clumsily recasting the villains as North Korean. If you think the prospect of American soil being conquered by an isolated nation that often struggles with famine and keeping the lights on is a bit silly, then consider that in the original, Castro's Cuban forces overwhelmed the entire South. Oooh, scary.

Aside from some cosmetic changes, the story stays close to the 1984 playbook, with the remnants of a high school football team and their dates becoming a crew of hardened guerrillas dubbed "The Wolverines," who fight back from the shadows against the enemy incursion any way they can.

They are led by a combat-seasoned Marine Jed Eckert (Chris Hemsworth) and his whiny little brother Matt (Josh Peck), who are both hell-bent on avenging their slain policeman father. After a ludicrous training montage, our band of merry warriors has become an elite fighting unit whose hit-and-run tactics are proving effective. Eventually they hook up with a group of professional soldiers, led by a hammy Jeffrey Dean Morgan, who are planning a daring raid on the bad guys' regional headquarters. Much of the picture was made in Michigan, and it's sort of amusing to see parts of Detroit masquerading as Spokane, Wash., to watch tanks roll through Grand Circus Park, and to see downtown Pontiac getting blown to shit — or a least worse than it already is.

The original was a launch pad for such soon-to-be stars as Patrick Swayze, Charlie Sheen and Lea Thompson, and that seems to be the intent here. Both Red Dawn and The Cabin in the Woods sat on a shelf while Chris Hemsworth broke through as a huge action star in Thor and The Avengers, and it's easy to understand why he was slated as the next big thing. Hemsworth has the impressive physicality and the ample charisma to dominate the big screen, and when he's off it the movie suffers greatly.

Tree trunk-shaped Hemsworth and runty Peck do not remotely appear to have been from the same genetic stock, and there is a clear gap in acting ability as well. Peck is dreadful. Hopelessly lost as an action hero, he nearly blows a blood vessel every time he tries to emote.

Adrianne Palicki (Friday Night Lights) is appealing as Jed's romantic foil, but the rest of the cast just sort of stands around like extras in an Abercrombie & Fitch ad, and when some of them get blown away we feel nothing. In fact the only thing we do feel are pangs of regret, that in Hollywood's quest to resurrect every last '80s vehicle, this muddled rehash of an already questionable project somehow lived to fight again.