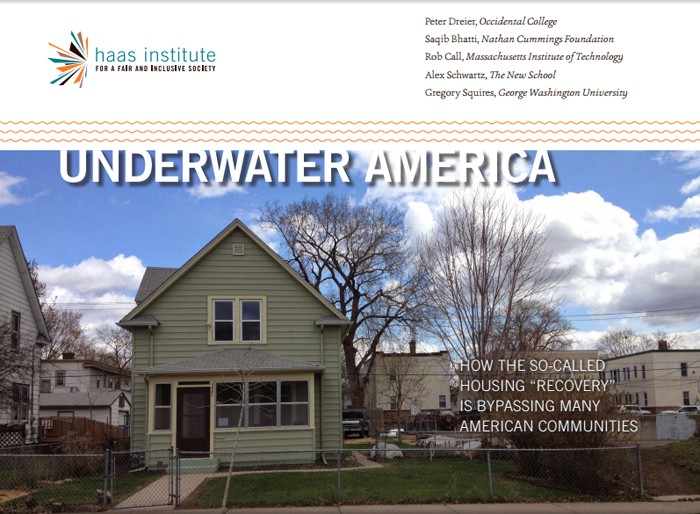 Nearly half of Detroit’s homeowners are still drowning.

That’s the assessment from a lengthy report released last week by the Haas Institute for a Fair and Inclusive Society, a hub of researchers based out of the University of California-Berkeley.

The report, titled “Underwater America: How the So-Called ‘Recovery’ is Bypassing Many American Communities,” analyzed negative equity foreclosure data, but the researchers focused their efforts at the local level. The researchers determined that, due to the recent foreclosure crisis, “millions of families continue to face financial devastation from which many may never recover.”

In Detroit’s case, the institute’s findings are especially jarring: Last year, 4,830 homes went into foreclosure and 47 percent of the city’s homeowners remain underwater on their mortgages, meaning they owe more than the home is worth.

Though the nation may be experiencing the lowest unemployment rate since the recent economic recession began (6.3 percent), Detroit maintains double-digit levels. And, for those residents who are employed, their earnings pale in comparison to the nation’s average: The median household income in the city is nearly $27,000, about half of the U.S. median.

Last week, the report’s findings drew the ire of a group of local progressive activists, who gathered on Detroit’s northwest side to call for swift action in response to the report.

“We want to make sure we encourage program reforms,” says Brandon Jessup, a candidate for Michigan’s 10th House District who represents the Michigan Forward Urban Affairs Group. “Detroit is the largest community in the United States that has not recovered from the foreclosure crisis.”

And it’s not just Detroit having problems. Dozens of smaller communities across the nation are struggling to rebound.

“Despite home prices rising in many parts of the country, the total value of owner-occupied housing still remains $3.2 trillion below 2006 levels,” the report says. “Despite rising home prices, there are still some 9.8 million homes underwater, representing 19.4 percent of all mortgaged homes — nearly one out of every five homes. Underwater homeowners are significantly more likely to default on their mortgages than homeowners with positive equity.”

The problem, the report notes, is the federal programs launched to ameliorate the foreclosure rates have been “woefully insufficient.”

So the institute issued a number of recommendations for communities looking to grapple with the crisis on their own. Most notably, the report suggests something that first gained prominence in Richmond, Calif., a proposed program the Haas Institute calls “reverse eminent domain.”

The way it would work, a community could use the tool of eminent domain to purchase an underwater mortgage at fair market value, and essentially bail out the homeowner by refinancing the loan to the current market value. To us, that seems like it’s eminent domain.

The basic premise of eminent domain is that governments can use it to condemn property for a public purpose — in this instance, mortgages. Richmond contends the “public purpose” here is to prevent foreclosures and blight, the New York Times reports. To accomplish the task, the city would purchase a mortgage out of the pool and restructure it, “restoring equity to the homeowners and keeping them from defaulting.”

But officials in Richmond have already witnessed a backlash to the innovative plan from such banks as Wells Fargo.

As The New York Times reports, the financial institutions “have warned that mortgage lending would halt in any city that tried eminent domain — and they have lobbied Congress to ensure that the threat is not an empty one. Opponents have filed federal lawsuits, while real estate interests have made robocalls to residents and sent mass mailers warning that the plan would allow ‘sick, politically connected’ investors to ‘take houses on the cheap.’”

Although it might not be a silver bullet, advocates of the plan say it’s a readily available tool to resolve the foreclosure crisis — even if the plan would certainly be tested in court.

Regardless, Jessup says, the plan is something Detroit officials should look to for guidance.

It would allow the city to “restructure [mortgages] to be fair and affordable,” he says. “Until we can provide some consumer protection — I think [we’ll] be a long way from having fair and equitable housing.”

We at the Hits crew consider ourselves a positive bunch, but we were feeling glum this week thanks to the state Legislature’s renewed insistence on making democracy more difficult in Michigan.

With the Great Lame-Duck Session of 2012, one might have thought the starry-eyed display of elected leaders ramming through legislation that received about as much thought as a sandwich order couldn’t be topped. Surely, we thought, Lansing reached its apex when it passed a fresh emergency manager law a mere six weeks after voters rejected a similar law.

But breathe a sigh of relief.

Our great lawmaking bodies seem to have found the perfect method of politicking; a revamped way to go about their business, one that expedites the democratic process, eschews the will of the people, and makes our ballot sheet a convoluted mess in the name of … uh, ratfucking, we guess?

Last week, the Republican from Monroe introduced legislation that would increase (!) the state’s minimum wage to $8.15 per hour.

That sounds wonderful, no? Well, Randy’s way of doing business has upset some: His bill would repeal Michigan’s half-century minimum wage law — a clear attempt to blow up a group gathering signatures right now to place a proposal on the November ballot that would ask voters to gradually increase the state’s minimum wage to $10.10. The group’s proposal seeks to accomplish that by amending the very minimum wage law Richardville is now trying to repeal.

Richardville’s mouthpiece Amber McCann beat around the bush when asked by Chad Livengood of The Detroit News if the bill was an attempt to eviscerate the $10.10 minimum wage campaign.

Oh, please. First of all, although McCann is paid to be a flack, to suggest End-Run’s legislation is not designed to negate the $10.10 wage ballot initiative is, no matter how you spin it, a farce. And whoever drummed up this idea to pass a bill for that reason is probably being taken out to P.F. Chang’s for their brilliance tonight. If the state’s minimum-wage law is repealed, the very one the $10.10 group is trying to amend, then, yeah, it’s going to cause some legal problems — that is, it will render it null and void. Also, if it’s End-Run’s game to redirect the conversation back to Lansing, one of his colleagues already proposed a similar bump to $8.15.

Sen. Rick Jones (R-Grand Ledge) had already introduced a bill to raise the minimum wage to $8.15 an hour, but McCann told the News Richardville was “more focused on his legislation” than the Jones bill.

Sure, he probably is more focused on his bill, as it would blow up the $10.10 ballot initiative and likely drive down the number of voters who support Democratic candidates. The ballot is already a mess thanks to the recent kerfuffle surrounding the ballot proposals on the state’s wolf hunt. Come to think of it, we seem to recall the only ballot referendum the Legislature hasn’t tried to obliterate recently was one that requires women to buy a separate insurance rider for abortion coverage. How’s that going? As Detroit News columnist Laura Berman pointed out last week, those riders simply don’t exist.

Speaking of Lansing, the Hits crew was pleased to hear that some legislators were advocating for public transit-centric amendments to a $400 million road funding package, including an attempt to prevent future widening of the state’s highways. The Freep reports that Democrats sitting on the House Tax Policy Committee tried to “get amendments passed that would invest at least a portion of the shifted tax revenues into public transit and ensure that the money would go for fixing existing roads, rather than adding lanes to the state’s thoroughfares.”