this theater has been in continuous operation since 1928 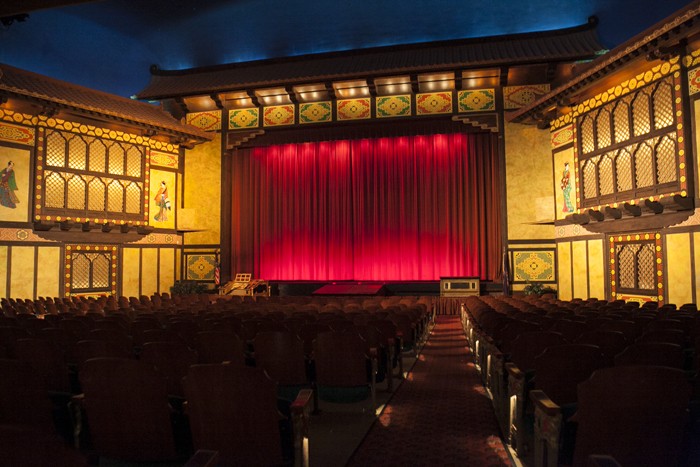 Commissioned by a group of citizens who wanted a place to perform the occasional stage show, the Redford Theatre stands at 17360 Lahser in a Detroit neighborhood that can be considered part of Brightmoor, but is known as Old Redford, as it once belonged to Redford Township. Originally designed as a playhouse, the theater has been in continuous operation since it opened in January 1928.

Financed by Bachus Fordon Co., Detroit Trust Co., and Harry Lush, the Redford was designed by the firm of Verner, Wilhelm, and Molby of Detroit, with John H. Kunsky Co. as builder. Parts of the architecture today are covered up by the large marquee that was added to the theater mid-century. A trip to the landing of the marquee reveals the craftsmanship that went into its original design, which included coved windows, marked with the faces of comedy and tragedy.

At 86 years old, the theater has undergone several transformations. For a time it was a dumping ground, where seats from old theaters were brought in to replace those that had become dilapidated from decades of use, turning the rows into a cacophony of faded color and outdated design. For a time, ragged carpeting was taped together and old decor dated the theater’s aesthetic.

Now fully restored, the theater is truly beautiful. A rare gem in the city, it’s escaped the effects of decline and decay thanks in large part to the nonprofit organization that owns and operates it. The Motor City Theatre Organ Society purchased the theater in 1977 and has, through fundraising and volunteer efforts, upheld the integrity of the space and improved it where necessary, consciously and consistently sustaining the original vision of the theater’s decor and design.

MCTOS treasurer Liam Neary gave us a tour of the building, pointing out the nuances that make it so unusual, and therefore worth preserving. Those involved with its original plans to be a playhouse thought the theater would be the epicenter of the entertainment district in Detroit. In fact, the theater’s stage is only three feet shorter than the Fox’s, Neary says, and a seven-story-high rig allows for multiple backdrops, not to mention the enormous movie screen that can either take center stage or be tucked away during a theatrical performance.

Also housed in the theater is the state’s largest continuously used stationary flag, which is shown before every movie while the organist performs the national anthem.

At the foot of the stage sits the original pipe organ that was built and voiced for the theater. The three-manual, 10-rank instrument was played the evening of the grand opening, throughout the theater’s time as a silent movie house, and to this day is still operated by volunteer organists as a prelude to the classic films that are shown two weekends a month.

Originally designed with Japanese-themed decor and architectural features during World War II, the entire interior of the theater was painted over. According to Neary, walls were even built to disguise structures that alluded to Japanese-style construction. Furniture and decor were removed, some of which was never recovered. Later, to capitalize on the era of gangster movies, walls were painted a concrete gray in the style of cinder blocks, making the whole theater appear like a cell.

In the late ’90s and early 2000s, the original Japanese motif was resurfaced and repainted entirely by volunteers. Seven layers of paint were removed from the walls, and where the original murals couldn’t be resurfaced, they were repainted using old pictures of the theater.

“It looks exactly like … when it first opened,” Neary says.

In the foyer, a Wayne State University art student painted twin Japanese-style murals that hang on matching staircases to the balcony. The recently installed carpet is lush, and the 1,610 new seats create a gorgeous sea of teal, which matches the cerulean ceiling that sparkles with “stars” that emit fiber optic light. New, specially crafted lighting fixtures replaced the former ’50s-style gold cones that offered light near the concession stand. Two identical chandeliers saved from the Detroit Oriental Theatre (later known as the RKO Downtown) hang from the theater’s high ceilings.

Nowadays, the Redford Theatre is used for all sorts of performance and events. Tribute acts often take the stage, and occasionally there will be a special celebrity meet-and-greet to coincide with a movie showing. Stars who have made appearances at the theater are commemorated with a small gold plaque that’s placed on the back of one of the theater’s 1,610 seats. Those names include Shirley Jones, George C. Scott, Pam Grier, Butch Patrick, Tippi Hedren, and many more.

Weddings can be held here, along with birthday parties and other special occasions.  Movies are shown for $5 a ticket every other weekend. Concession prices remain reasonable, with popcorn going for no more than $4 and candy no more than $2. July 11-12, Alfred Hitchcock’s Vertigo will be played three times, with the next showing taking place on July 25 and 26 when the seminal ’80s classic The Princess Bride will be shown.

A classic relic of old Detroit, the Redford Theatre is a treasure to the city and her suburbs, a structure we’re lucky is not only still standing, but thriving.