Rehabilitation Institute of Michigan, dance studio partner in program for people with a disability 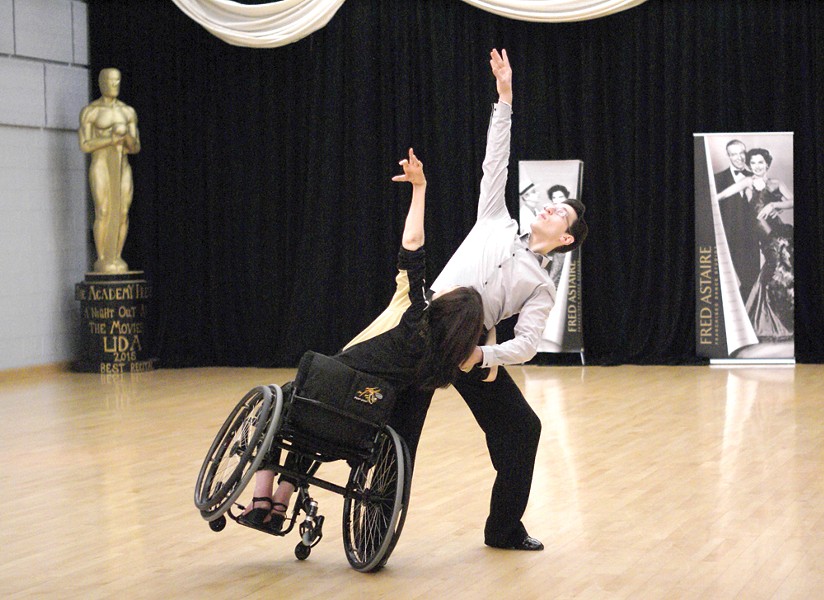 On the first Saturday of every month, couples gather on the dance floor at Fred Astaire Dance Studio to learn the fundamentals of the waltz, fox trot, and other ballroom moves. But this isn't just another class at the Bloomfield Hills studio.

This is Dance Mobility, a free program that brings together wheelchair users and their partners with Fred Astaire instructors for group lessons that prove dance is truly universal. Supported by a grant from the Rehabilitation Institute of Michigan Foundation, it is the only program of its kind in the state of Michigan.

Dance Mobility is a collaborative effort between the Rehabilitation Institute of Michigan's Cheryl Angelelli and studio owner Evan Mountain, who envisioned the program as a way for his studio to serve the community through dance. Mountain first hired an instructor experienced in wheelchair dance in 2014, and Angelelli was one of his first students.

An accomplished athlete and four-time Paralympic medalist swimmer, Angelelli began dancing after retiring from competitive swim. Wheelchair dancing is a popular paralympic sport in Europe, but she struggled to find an instructor here in the U.S. She finally found one thanks to a Facebook post from Mountain, who brought in a dancer from overseas to add wheelchair dancing to the Fred Astaire class lineup.

Since then, Angelelli has worked to expand the program's reach and to share the joy and freedom of dance with other wheelchair users. As director of marketing and public relations for RIM, she secured the grant that allows the studio to offer Dance Mobility classes free of charge.

Along with her dance partner, wheelchair dance instructor, and choreographer Tamerlan Gadirov, Angelelli takes the floor to lead the lesson, demonstrating simple dance moves for the gathered dancers and their partners.

Gadirov is the second wheelchair dance instructor to come to the studio as part of Mountain's effort to make their dance offerings more inclusive. The first, Sergio Sanchez, taught the class and partnered with Angelelli in competitions until leaving for another studio late last year. Gadirov arrived a few months later from his native Azerbaijan, where he competed in wheelchair dance competitions across Europe and Asia.

The social element of the program is evident as dancers trickle in, greeting Angelelli and sharing updates on their lives. Many of the dancers learned of the program through other RIM activities, and some brought their friends to join as well.

Evan Petros, who has been part of the class from the start, brought her friend Angela Miller for the first time in May. For Miller, the class was a chance to get out of the house and have fun.

"I love it. It is something to do," Miller says. Although transportation to the monthly event is difficult for her, she hopes to continue attending.

Becca Prueter, from Special Tree Rehabilitation Center, brought two clients to the class for the first time in May and hopes to return with two more in the future.

"It was a great opportunity for the clients," Prueter says. "It lets them learn something new, try something different that they don't normally do."

On the dance floor, wheelchair users are not the only ones learning new moves. Gadirov is also teaching his fellow Fred Astaire instructors, partners of dancers who do not have a disability, and volunteers from the studio's other dance classes how to lead a partner in a wheelchair. Couples who attend together are often excited about the increased comfort with social dancing they gain from the classes.

In March, Dance Mobility added a second free class to its offerings, this one for amputees who use prosthetics. Also funded by a RIM grant, the six-week pilot program was so successful that the studio added it to the monthly schedule.

First-time attendee Jesus Villa, a double amputee who has found success in several sports, came out to try the new class at Angelelli's urging.

"I have no idea what I'm doing. The only dancing I do is a little Carlton," Villa jokes before the class started. But on the dance floor, his natural athleticism was evident as he moved quickly from a fox trot to spinning his partner in a lively salsa.

Dancers of all ages and abilities are welcome to participate in both classes, and no partner is required. Volunteers, most of them students or staff at Fred Astaire, are on hand to work with attendees who come alone.

Kira Yesakov is one of the regular volunteers. She "fell in love" with the studio when her daughter danced there, and has since become involved in several of the studio's specialty programs for people with a disability.

"I just joined this volunteer group, but before that I volunteered with another program for kids with disabilities," Yesakov says. "It is a great program. Nothing should stop them from having life."

As Dance Mobility celebrates one year of offering free group lessons to wheelchair users, both classes continue to grow. More than 50 people have attended the wheelchair class this year, and the amputee class is attracting steady interest as word spreads.

Other Fred Astaire locations are also taking note. According to Mountain, studios in Milwaukee, Chicago, and Indianapolis are interested in replicating the program.

For Angelelli and Gadirov, this is good news. They are preparing to compete in two upcoming events, including the Fred Astaire World Championships in Las Vegas, but they are often the only pair entered in the wheelchair dance category. As the sport grows, they hope to have more competition in the future.

Upcoming Dance Mobility events take place on June 11, July 9, and Aug. 6. The classes are free and open to anyone interested in participating. Pre-registration is required. For more information, contact the studio at 248-454-1715.