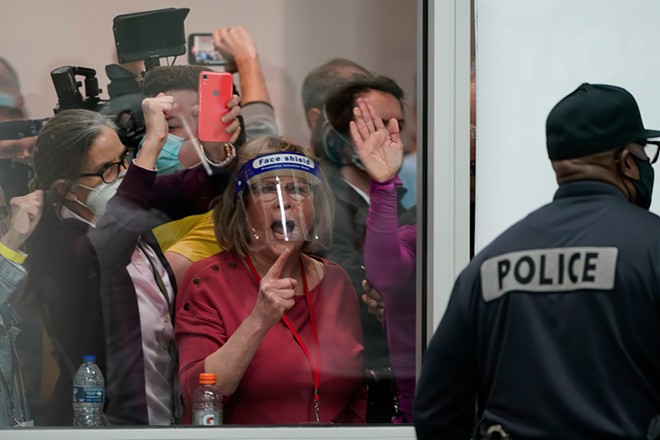 Republicans sank to a new low Tuesday evening when two members of the Wayne County Board of Canvassers, without a shred of evidence of election fraud, voted against certifying November’s election results.

The 2-2 deadlock, along partisan lines, was an unprecedented assault on democracy that threatened to disenfranchise hundreds of thousands of voters, drawing strong condemnation from Democrats. President Donald Trump called it “a beautiful thing,” and the Michigan Republican Party cheered the vote.

But hours later, the board’s two Republicans – Monica Palmer and William Hartmann – reversed course, agreeing to certify the results but called on the state’s secretary of state to conduct an independent audit.

Now the Board of State Canvassers must certify the election results by Nov. 23.

Seemingly unaware that the board had reversed itself, Trump celebrated the deadlock Tuesday night.

“At first they voted against because there were far more VOTES than PEOPLE (Sad!),” Trump tweeted. “Then they were threatened, screamed at and viciously harassed, and were FORCED to change their vote, but then REFUSED, as American patriots, to sign the documents.”

“In refusing to approve the results of the election in Wayne County, the two Republican members of the Wayne County Board of Canvassers have placed partisan politics above their legal duty to certify the election results,” Gov. Gretchen Whitmer said in a statement. “The people have spoken: Joe Biden won Michigan by more than 140,000 votes. Today’s action is a blatant attempt to undermine the will of the voters.”

Wayne County Executive Warren C. Evans said the partisan vote was “a slap in the face of our democratic process” and pointed out that judges have rejected the baseless allegations of voter fraud or irregularities.

“There has been no proof offered, no evidence of voter fraud uncovered by Republicans that has withstood the impartial eye of our judicial system,” Evans said. “The arguments brought by partisan Republicans are specious and have been rejected by level-minded judges in Wayne County and across the country. It is time to respect the rule of law.”

Progress Michigan, a liberal advocacy group, said the refusal to certify the election results was “a racist attempt to disenfranchise Black voters in Detroit,” noting that Palmer suggested the board certify all the results except for Detroit’s.

If the board had not reversed itself, “it would have been a historically shameful act,” Mayor Mike Duggan said.

“For the Republican members of the Wayne County Board of Canvassers to buy into conspiracy theories and completely disregard the will of the voters in Michigan is not only shameful but a complete dereliction of duties,” Barnes said. “It was made clear by the comments during the meeting by Palmer and Hartmann, that they have no true understanding of the task they have been charged with and zero understanding of Michigan statutes governing recounts.”