Island in the sun. 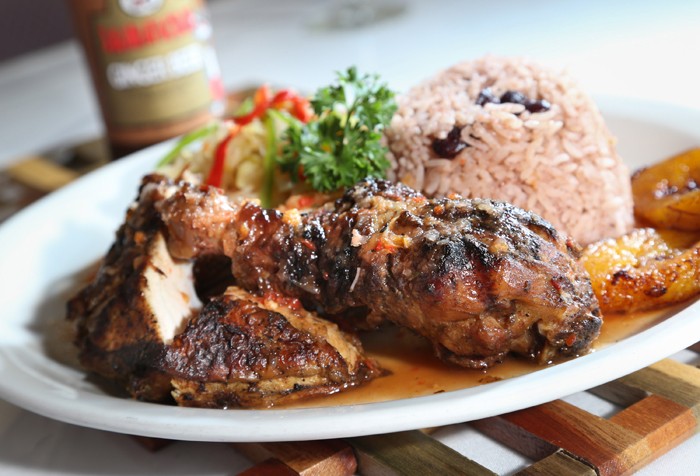 Jamaican Paradise — isn’t that a redundancy? Especially after our hard winter, I welcome any experience that can transport me to a tropical island, even one I’ve never visited.

It’s interesting that the cuisines of the hot countries aren’t really similar to what we in the North associate with summer eating — lighter dishes, salads. Starchy cassava is a major staple in Africa. Puerto Rican food will sit in the bottom of your stomach like a stone. And I can’t think of a more stick-to-your-ribs dish than Jamaican oxtail.

Which is not a complaint. I love this rich, sumptuous, tender dish, though it must be eaten so carefully. Odd that nature concentrated so much flavor in this nearly forgotten piece of the steer. The leftover bones look like pieces of a jigsaw puzzle, and Jamaican Paradise adds lots of rich gravy to its generous serving.

The Jamaican national dish is ackee and saltfish (salt cod), and it’s offered here in the breakfast column for a price worth trying at $11.99. It’s a simple recipe: stir-fry tomatoes, green peppers, and Scotch bonnets with seasonings, add the fish (after desalting and soaking), add the fruit, and cook briefly. Both the texture and the bright yellow of the ackee make it feel like scrambled eggs, but the flavor is more interesting, just subtly spicy.

But the Jamaican national dish is jerk chicken, you say? Here it’s the biggest seller and cooked to exquisite, fall-off-bone tenderness with a perfectly crisp skin, quite hot from the Scotch bonnets again. I especially appreciated being served flavorful drumsticks rather than blander breasts. How so many people came to prefer white meat over dark is a mystery akin to flour tortillas versus corn or white rice versus brown. Lack of flavor is somehow seen as more “refined,” in more than one sense.

But that’s not an issue at Jamaican Paradise. Another Jamaican national dish is “peas and rice,” though the peas are actually kidney beans. Here it’s one of five side dishes; choose two with each entrée. The white rice turns an almost pale violet color from the bean juice, and it’s subtly flavored with coconut milk, which imparts a mild vanilla taste.

Actually, there’s a sixth side that’s not on the menu, but co-owner Janice West claims it’s the best. It’s shredded cabbage cooked with peppers, carrots, onions, and scallions (“scallions are the long one, onions are the round one”).

Both chicken and goat are mildly curried here — again, large servings, moist, tender. The chicken is yellow as expected, but the goat is rather green, which I was glad to see online as well when I looked up recipes afterward.

I also found Jamaican mac-and-cheese and Jamaican candied yams — who knew? At Paradise they’re not top-drawer, but not bad. I preferred the simple mixed vegetables as a side — plain carrots, cauliflower, and broccoli done just to the right crispness.

Dishes I wouldn’t order again are quesadillas and callaloo saltfish fritters. The eight quesadilla triangles were made with orange cheese and chicken; they’re a tiny bit spicy, but nothing special. Callaloo is a leafy vegetable — amaranth — with little discernible flavor in this dish. The three large patties were bland and heavy.

To drink, one of the ginger concoctions is in order (there’s no alcohol yet). The small size is 16 ounces. The pineapple-ginger seems mild at first, but the ginger creeps up on you nicely at the end. I liked even better the jewel-magenta sorrel, which is more strongly ginger-flavored.

Paradise was opened by Janice and Kahama West in April last year. It’s not big on atmosphere. Decor is basic, with tables covered by flimsy pink plastic. Jamaican music plays. A live band appears once a month on a Saturday, and perhaps most intriguing, ballroom dancing is offered from 6:30 to 8 on Wednesdays.

But the quality of the food is reason enough to visit, and the likelihood that you’ll get double-duty out of each meal.