Yippie-ki-nay! Big, dumb and loud, this latest installment is just a money grab 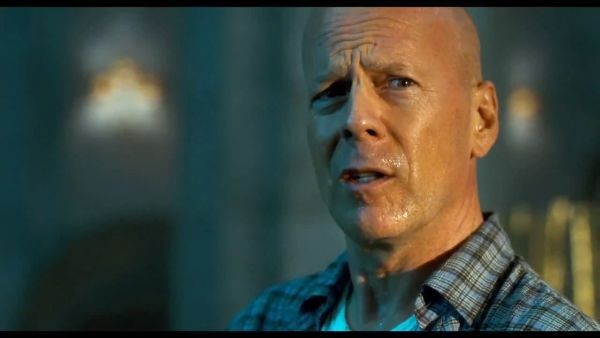 Actually, June 27, 2007 — the release date for Live Free or Die Hard — would have been a good day to lay this action franchise to rest. At that point, the Die Hard sequels had outlived their ability to entertain, serving up a tired and wit-free John McClane (Bruce Willis) in uninspired off-the-shelf vehicle chases, CG explosions and firefights.

Need proof that this fifth installment is just an exercise in extended cash-grabbing, bombastic mediocrity geared for the international market? Exhibit 1: The film is directed by John Moore, whose smeary visuals and bloodless pacing made Max Payne and the remake of The Omen instantly forgettable cinematic experiences. Exhibit 2: Skip Woods, the screenwriter responsible for Swordfish, Hitman andWolverine, continues his reputation for unimaginative, tension-free plotting, weak characterizations, and dialogue that’s so devoid of personality it can be easily translated into any and all languages. When the best wisecrack you can come up with is “I’m on vacation!” (squawked three times no less) and “Let’s go kill some bad guys,” playing to global audience is a breeze. After all, fireballs and rat-a-tat don’t require subtitles.

After an incoherent intro that attempts to establish some post-Cold War intrigue but only manages to confuse, we’re reunited with the irascible yet world-weary John McClane, who’s just discovered that his estranged son John Jr. (Jai Courtney) has been arrested in Russia for murder. Determined to … well, do something … McClane arrives in Moscow just in time to witness a massive courthouse assault that plops him into the center of a crazed high-speed pursuit. See, it turns out that Junior isn’t a ne’er-do-well after all but rather an undercover CIA operative tasked with getting an imprisoned businessman named Komarov (Sebastian Koch) out of the country. There’s some nonsense involving incriminating files, Chernobyl and double- and triple-cross betrayals by people we don’t care about, but it’s all just a setup for the next deafening, carnage-filled action sequence — each of which grows more elaborate and less interesting as the movie proceeds.

A Good Day to Die Harddoes set up an intriguing thematic parallel between the McClane’s father-son travails and the relationship between Komarov and his daughter, but the one thing Woods’ script proves over and over again is that it has no interest in being interesting. Instead, it devotes its meager dramatic capital to emasculating Willis’ cocky smartass Everyman persona by turning McClane into a worried dad hoping for his son’s approval. Everything you liked about the first (and arguably second) Die Hard — the working-stiff heroism, the colorfully sketched supporting characters, the cultural subtext — has been jettisoned in favor of simple-minded plotting and massive amounts of property damage.

As for the focus on John McClane Junior, I understand the studio’s desire to set up a franchise heir, but why in the world would you sideline and, worse, undermine the charm of your main character? Indiana Jones and the Kingdom of the Crystal Skull made the same stupid mistake.

Loud, insultingly low-concept, and irony-free, A Good Day to Die Hard is a lazy, last-gasp attempt to make bank on the recent trend of action-geezer shrapnel-fests. But if the dire box office performances of Arnold Schwarzenegger’s The Last Stand and Sylvester Stallone’s latest are any indication, today may be the perfect day to take Die Hard out back and put a bullet in its head.