One of the first things that comes up when you ask about River Bistro, open since Aug. 13, is how nice the chef-owner is. One Rosedale Park neighbor wrote me about "the chef's high caliber and genuine commitment to community. He's an admirable human being — and a terrific chef." She went on to rave about the ceviche Maxcel Hardy had made for a fundraiser for the Oakland Avenue Farm. "Probably as a volunteer," she surmised.

The acclaim is because Detroit native Hardy does things like buy three lots in northwest Detroit to turn into a community urban farm, with a house to serve as a community center and plans to park a food van there to train kids in the culinary arts.

Of course, plenty of nice guys are not talented. Hardy is. He's serving food of a different caliber than you expect in a "Low Country and Caribbean" restaurant that does 75 to 80 percent of its business as carry-out. Meatloaf, mac and cheese, two kinds of wings, two kinds of ribs, a fish fry — it doesn't sound like chef-driven food, but try it. 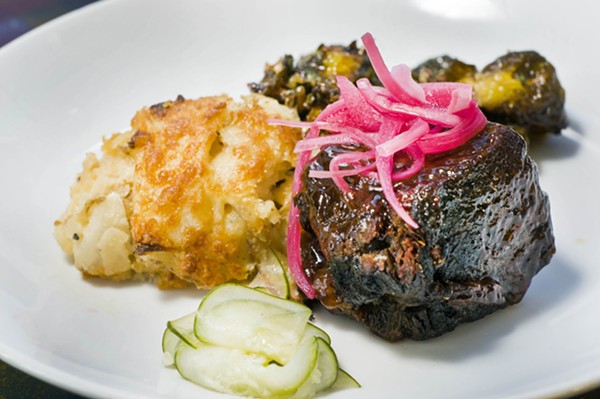 For instance, Hardy makes his own mango lemonade, using mango purée; it's a perfect blend of the two flavors. His jerk sauce uses guava purée, ginger, garlic, thyme, and one Scotch bonnet in each batch. (I couldn't believe how easily he gave up the recipe; I guess that's community spirit.) To the degree possible, everything is locally sourced, like the Jamaican-recipe ginger beer brewed in Eastern Market.

If those carry-out customers would sit down and stay a bit, they'd find a welcoming place with 16 stools at high tables, cloth napkins, a hook for your purse and professional service. An outsize painting on one wall shows an island girl with a flower in her hair.

Speaking of true jerk, one Jamaican told a reporter, "It has to be hot, but it cannot only be hot, or you get no joy from it." Right. Hardy's is sweet and nuanced, too. The exceptionally meaty, mostly boneless ribs come with red beans and rice, a twist of cucumber for cooling purposes, and fantastic thin, salty fried plantains.

The sauce recipe is used on both pork ribs and wings, but if you order short ribs, they'll be braised first in a wine-garlic-thyme-cilantro-shallots base, and brushed with the sauce afterward. 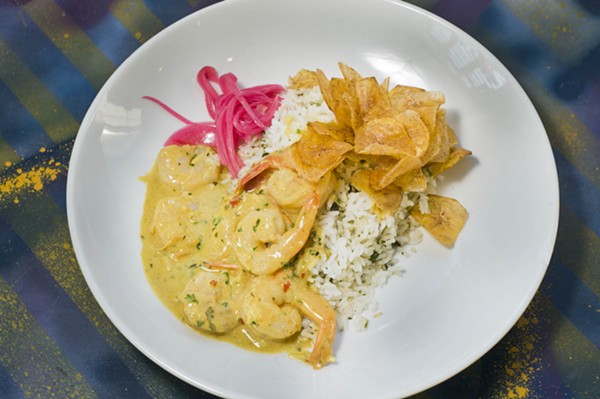 I was also a fan of golden Coconut and Curry Shrimp Scampi, which has firm critters, just-right heat levels, and lots of coconut taste. It's adorned with slices of radish.

What really had me singing praises, though, were some sides. White and creamy mac and cheese makes not much nod to your mama — it's made with Parmesan, Gouda, and Monterey Jack. (Again, Chef Hardy, you just told me how to make it at home.) And Hardy says he goes through a case of Brussels sprouts in a day, they're so popular: They're sautéed with bacon, then tossed with garlic and Parmesan, producing a smoky richness that belies their stinky aura.

I liked Hardy's meatloaf pretty well, though it seems restaurant meat loaf is always too compact for me — I like a looser "crumb." It comes with three-cheese scalloped potatoes and those great Brussels sprouts.

A vegetarian friend noted that the menu is not friendly to her ilk. But she asked Hardy to make her his chicken salad without the chicken, which meant candied pecans, raisins, avocado, cucumber, and feta, and it came out "terrific! Two meals, easy."

Other possibilities are Maple and Garlic Salmon with cilantro rice and sautéed spinach, a burger with avocado mayo, slaw, pimento cheese, and plantain chips, and the unfortunately-named Barnyard Pimp, which is chicken. (I don't think that means rooster.)

One evening my companion and I experienced a long delay for our dinner, so we were offered a free dessert. The jerk chocolate ice cream on special that day warranted any wait. Designed by Hardy and made by a local company, it was rich chocolate with a hint of caramel — and then a nip of heat at the end of each spoonful. It's worth calling in to ask if it's on hand.

Other good desserts are a caramely bread pudding and an ice cream sandwich — vanilla between chocolate chip cookies with caramel sauce — you detect the pattern.

There's no alcohol at River Bistro yet, but Hardy has hopes of bringing in beer and wine.

He's planning to open COOP, a chicken restaurant, in the Cass Corridor by January, and an African restaurant by next summer.

For now, River Bistro should satisfy. But the best way to enjoy Chef Hardy's wares, he says, is to book a private dinner in his back room, for two to 20, where he will concoct a personalized feast. 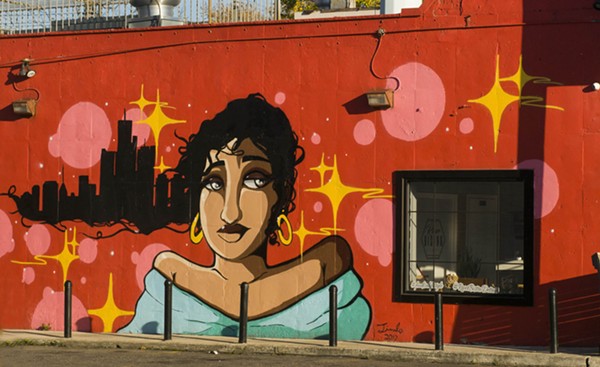