Review: Does Detroit’s first vegan coney island live up to the hype? 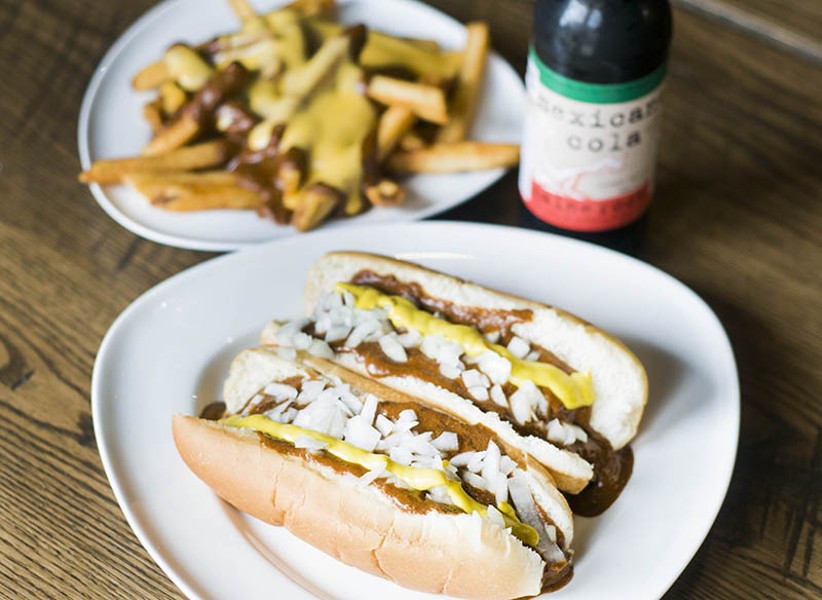 Few restaurants elicit quite the response that Brush Parks' Chili Mustard Onion did when it opened around three months ago. Some called the city's first vegan coney island a blasphemy. Most were thrilled, however — finally, vegans could experience all that Detroit coney joy without the beef hearts and ground up digestive parts. From a conceptual standpoint, CMO, run by the LaCombe family, is a stroke of genius.

So it's no surprise that since it opened in late July, lines sometimes wind out the door as customers wait to get a hold of the faux coney dogs, a "Big Mock" burger, a seitan gyro, vegan chili cheese fries, a beetball sub, and more. CMO is also notable because co-owner and chef Pete LaCombe uses organic ingredients and non-GMO, as long as they're available — there are very few restaurants that will stock organic mustard. A few dishes are gluten free.

Though CMO's fare sometimes isn't the healthiest — fries are still fries whether they're under plant-based chili and cheese or "regular" meat chili and cheese — the LaCombes are conscious of all the bad things that go into some food, and they try to avoid those things. Keep that in mind when you see the menu items' prices — some in Michigan are still getting used to the idea that good food costs a little bit more, so a $5.50 coney dog might seem pricey. No disrespect to regular coney dogs — I’ve eaten my share.

So on paper, CMO is a great idea, but does it live up to the hype?

The place to start at any coney island is the chili, and CMO's is similar to that of National Coney Island — slightly dark and rich. But it's also thin and beanless, filled with plant-based "meat" and onions, and not too spicy.

If you order the coney dog, then the chili is ladeled over a Lite Life Smart Dog, though Pete LaCombe has said that at some point he plans to develop his own dog, and I would love to see what he can do. The dog and chili are topped with a handful of crunchy, diced white onions and a squirt of yellow mustard. There's no calling it anything else — it's a coney dog.

But perhaps the best application of the chili is the chili cheese fries ($6.50). The fries that the LaCombes use are thick-cut and super crisp, having been cooked in organic sunflower oil. They arrive in a puddle of the chili and vegan cheese sauce, and it's messy and delicious, which is what you came for. But the best part about the vegan coney dogs and chili cheese fries is how you feel after and later. Part of the post-coney island experience is churning and gurgling guts, low energy, and a nap. That's just what low-quality ingredients do, and that's what you won't experience with the vegan versions.

Arguably the menu's high point, however, is the Big Mock ($13.95), CMO's take on the Big Mac. It's been decades since my last Big Mac, and there hasn't been a moment that I missed them. So while the idea of a vegan Big Mac is intriguing, it didn't seem like something that would fill a void in my life. However, the world is richer for the addition of the Big Mock. Pete LaCombe makes his patties with a Beyond Burger blend, and he's not revealing any secret ingredients. It tastes and comes as I remember, minus, of course, the beef — two patties, special sauce, lettuce, cheese, pickles, and onion on a sesame seed bun.

A solid gyro is another requisite for any respectable coney island, and CMO's exceeds that threshold. LaCombe makes his seitan in house with cumin, fennel, and other spices. The thin seitan is much less greasy and has a slightly spongy consistency. It's wrapped in a pita with tomatoes and onions, and a healthy portion of CMO's tzatziki is smeared on the whole thing.

Moving into the deep cuts, the Brush Park ($11.95) is a Greek pita with a deep fried Quorn cutlet, vegan cheese, lettuce, tomato, and excellent vegan ranch. A vegetarian friend wasn't interested in it after learning that it's made with Quorn because "I can go to the store and buy that," and other vegetarian acquaintances didn't hurry to CMO because they say they don't want food that's designed to imitate meat. As someone who isn't vegan or vegetarian, I'm not qualified to comment beyond to say, "Noted."

Another fine sandwich is the beetball sub ($13.95), which — as the name implies — is a take on a meatball hoagie, but with meatballs made of beets. The balls aren't nearly as "beet-y" as one might expect from something made of beets, and the consistency is surprisingly similar to meatballs. The beetballs are served on a sesame seed bun and under a thick coating of hearty marinara sauce with shredded vegan cheeze.

The Southwest Detroit nachos ($9.95) are made with a bed of waffle fries cooked to a golden brown, then covered with chili, cheese sauce, cilantro-lime sour cream, and pico. The blackened chicken strips are actually flavorful slices of salty and acidic mycoprotein, and though it's billed as an appetizer, the dish eats like a meal.

For dessert, there's excellent vegan soft-serve ice cream. CMO's drink list includes several cans of beer, and its liquor options consist of airplane bottles along with a range of mixers. The blueberry soda by Maine Root is one of the best pops out there, and CMO offers the always excellent Neu Kombucha, along with a few more options.