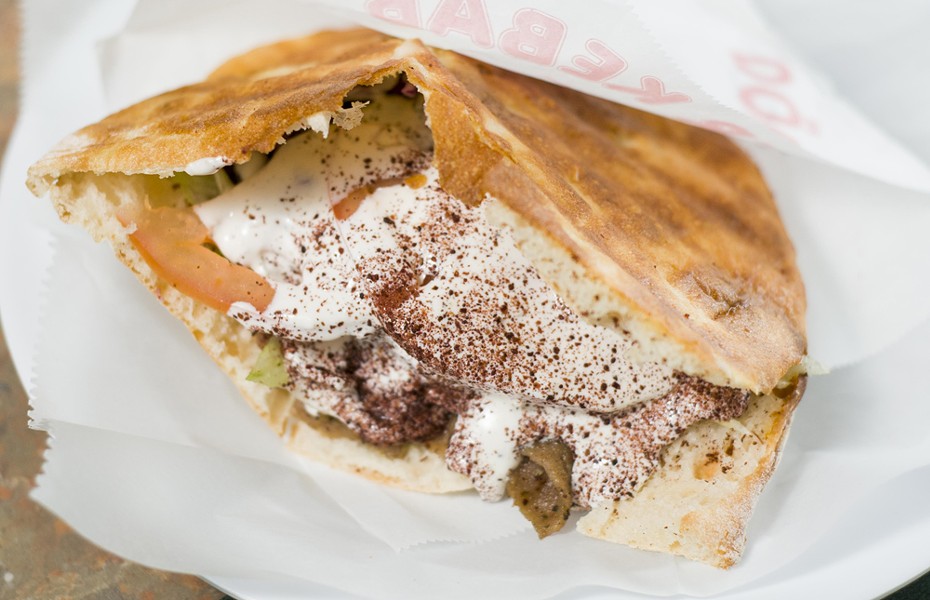 In recent years, it's been difficult to find in metro Detroit plates full of kajmak, lepinja, and pljeskavica. Hamtramck's Palma closed down years ago, and though there's still some cevapi and burek to be found in town, there's been a general dearth of Bosnian and Balkan cuisine — until a few months ago.

That's when Balkan House quietly opened in the former Palma space, but the dish that seems to be getting people talking the most isn't totally Bosnian — it's the döner kebab. The sandwich is Turkish in origin, but is wildly popular in northern European nations. Balkan House owner Juma Ekic says she really got acquainted with them when her family fled home for Germany for seven years after a civil war broke out in the 1990s in the former Yugoslavia.

The version she serves at Balkan House — which is a small restaurant in a house on Caniff Street — is made more Bosnian because she packs the contents into a pocket of lepinja, the Balkans' flatbread version of pita that is unquestionably far superior to pita.

It helps that Ekic and her family bake the bread fresh each morning in Balkan House's kitchen, and lepinja is puffier, lighter, and softer than most pita — it might be the world's most underrated bread. Ekic stuffs the pocket with salty, somewhat greasy, and thinly cut kebab meat that's the pre-cut gyro variety, not sliced from a spit. The lamb and beef is counterbalanced with fresh slices of crunchy cucumber, white onion, red cabbage, shredded lettuce, and tomato slices.

But Ekic says the sauce is really what makes or breaks a döner. She revealed her sauce's components, but kindly requested that we not share it here. It can be said, however, that it's a very garlicky Greek yogurt-based condiment. Balkan House ladles it on thick, hits it with a dusting of sour sumac, and sends out of the kitchen a döner so packed that its contents nearly bust out of the lepinja. Balkan House's döner lives up to the hype, and it's the only döner game in town. The next closest one is made at a Bosnian restaurant in Grand Rapids, Ekic says.

Lepinja is present in most of Balkan House's dishes, including the Balkan burger, or pljeskavica. It's a simple burger in a large, halved lepinja (no pocket). The beef patty is mixed with onion, garlic, and red pepper, then charred on the griddle and served with white onions and a souffle cup of kajmak, or cheese. Balkan House's kajmak is made in house and is an awesome blend of cream cheese, feta, and butter, and though the menu says that it's mixed in the patty, Ekic serves it on the side. Palma mixed it in with the meat, but Ekic didn't like the presentation, so you spread it on yourself.

Bosnian restaurants are partly measured by their cevapi, and, Ekic — who for 15 years prepared and served the sausage just around the corner at Motor City Sports Bar — got her recipe from an old Bosnian man in town who helps her make it. Cevapi is spiced with garlic, black pepper, and salt, but its success hinges on much more than spice. Good cevapi, Ekic explains, uses 70 percent beef shoulder and 30 percent fat, and it's grinded three to four times, then thoroughly hand-mixed — a labor-intensive process.

The cevapi comes as its own plate, with eight or so logs between halved lepinja, dollops of ajvar (mild-but-flavorful red pepper spread), and kajmak and slices of raw white onion and tomato. You can also get it as part of the mixed meat platter, which was big enough for a hungry friend and me. It also holds long, skinny, garlicky sujuk kic sausages, a shorter, fatter veal kielbasa (krajnska), grilled chicken breasts, and a bunch of cevapi logs. That's accompanied by mini patties of pljeskavica, or burgers, as well as raw onion and tomato slices.

Beyond cevapi, Bosnians are perhaps best known for burek, a stuffed pastry, and Balkan House sometimes has that or sirnica, which is burek with ricotta cheese inside a tube of golden, light, flaky dough. It's excellent.

The veal sandwich with melted Swiss cheese, grilled onion, and mushrooms, and the grilled chicken sandwich with lettuce, tomato, and red cabbage are solid options, especially because they arrive on lepinja. Ekic marinates her bird overnight, but she says there's nothing particularly Bosnian about the recipe. The chicken and veal can also be ordered on skewers.

There's really not too much discussion of vegetables at Balakan House because it appears a Bosnian diet is meat-heavy, but the menu holds a section of salads and soups, and the cabbage salad dressed in oil, vinegar, salt, and black pepper is a nice side. However, a friend asked about assembling a vegetarian version of the döner kebab, and Ekic said she could. Rejoice, vegetarians.

Balkan House isn't short on sweets, including some of the best baklava in town, which is a Turkish recipe made by Hamtramck's new Balkan Sweets company. It also offers dessert crepes, a banana cake roll called rolat that's mellow and sweet, and much more. There is no booze — Bosnia is largely a Muslim country — but there are smoothies, Turkish coffee, and other options.