Cautionary tale. Big, dumb and loud, this 3-D adaptation is an absurd mishmash 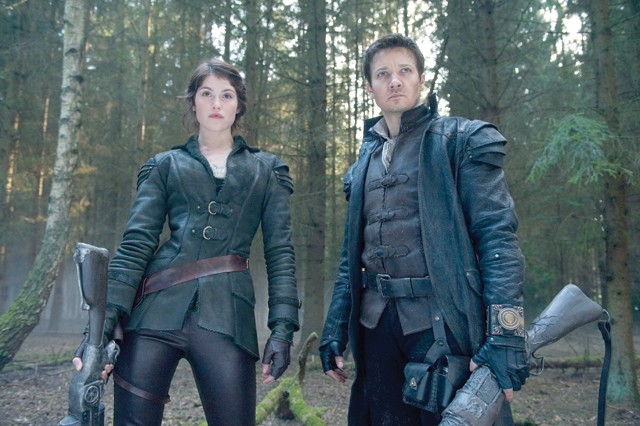 Are you’re the typeof moviegoer who has been clamoring to see an R-rated IMAX 3-D feature about two beloved children’s fable characters morphed into foul-mouthed, bloodthirsty ass-kickers who deploy a brand of ruthless vengeance with a vigor that would shock the Inglourious Basterds team? If so, I have a follow-up question: What the hell is wrong with you?

Once upon a time a premise this absurd wouldn’t make it past dress rehearsal as a skit on SNL, but in an entertainment landscape where even Abe Lincoln and Snow White have become savage monster-slayers, anything is possible. And this is exactly the kind of loopy fantasy flick where literally nothing is impossible because none of it makes the faintest bit of sense. A disastrous mishmash of tones and themes wrapped around a shoddy one-joke premise, Hansel & Gretelcareens from one gory action set piece to the next with a devil-may-care attitude toward plot, pacing, character development and for the fragile sensory organs of the audience subjected to this constant onslaught.

A thick layer of grime and CGI gets applied to the old German folk tale, beginning with an origin scene that depicts the kidnapped title siblings dispensing with a truly menacing witch in gruesome fashion.

The blandly attractive duo of Jeremy Renner and Gemma Atherton play the famed orphans, now grown up and experts in all manner of lethal arts and weaponry, from daggers to whips to crossbows and, anachronistically, tasers and big old Gatling guns (which seem to be very popular lately). Our heroes need this fully stocked armory because the forests of Bavaria are apparently lousy with evil, child-stealing crones, and though the siblings are strangely immune to the baddies’ strongest spells, the witches are still strong and very, very nasty. They also look pretty silly, caked with layers of makeup ranging from grotesque to cheesy, like leftovers from the Sid and Marty Krofft archives.

An embarrassed Famke Janssen cashes a paycheck as the lead ghoul, and she at least pretends to relish her villainy, though buried under a mound of latex. During the brief pauses between splattering witches all over the scenery, the good guys befriend a lovely, skinnydipping “white witch” (Pihla Viitala) and a sweetly loyal but dimwitted troll (Derek Mears) with a penchant for stomping heads like grapes with his massive feet. Believe it or not, he’s the film’s most sympathetic character.

Norwegian director Tommy Wirkola (Dead Snow) does have a knack for decapitations and dismemberments, but the relentless screeching and explosions are debilitating even at a brisk 88 minutes.

Amid all the chaos, the few amusing touches (like missing kids painted on milk jugs) are overwhelmed by a script whose idea of wit is having the stars hurl F-bombs along with their hand grenades. Even by the low standards of January box office slop, this fractured fairy tale is an utterly idiotic, crass, vile and noisy calamity. Stick to the storybooks, kids; at least they never scream at you in stereo sound.mt