Review: 'Vice' reminds us that we don't know Dick 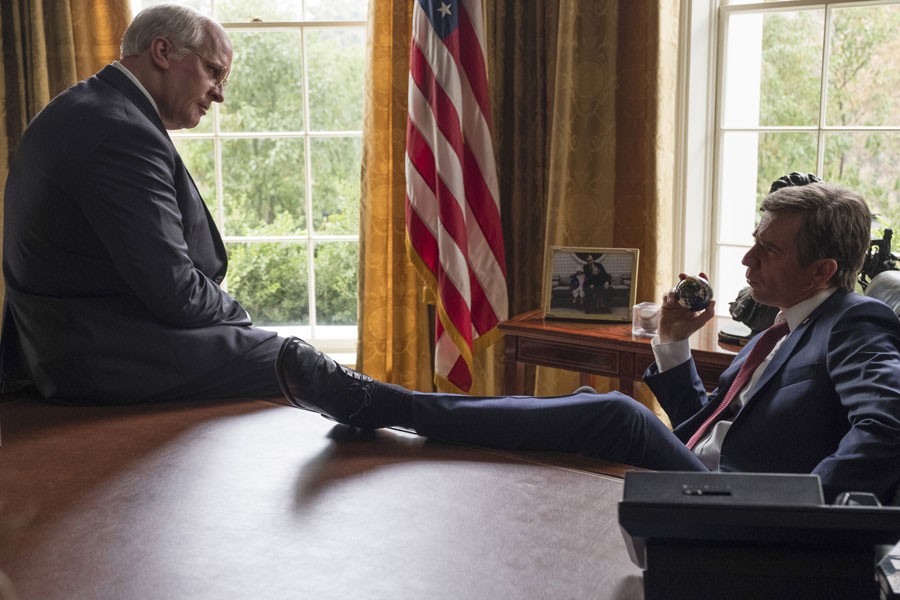 Adam McKay’s dark satire about the 46th vice president of the United States plays like an exhausting catalog of the depravity of unchecked ambition — the perversity of its subject matched only by the perversity of even making a biopic about Dick Cheney, quite possibly one of the most polarizing and uncharismatic politicians of the modern age.

The film follows Cheney’s anti-heroic journey from an aimless, boozed-up Yale washout hanging power lines in Casper, Wyo., to the shadowy power behind the highest seat in the land. Christian Bale, renewing his commitment to roles that require extreme body modification, appears here plump and slathered with aging makeup, which only enhances his already flawless copying of Cheney’s sneers and snarls. It’s an uncanny impersonation, even if Bale and the screenwriter never get any closer to understanding what animated Cheney’s calculated viciousness. We are not privy to an origin story, a flashback to some childhood trauma like Bruce Wayne’s, or a singular incident that fueled Cheney’s simmering pit of anger. Instead, we get the moment in which his pretty, shrewd, and ambitious fiancée Lynne (Amy Adams) forcefully insists that if he doesn’t abandon his boozing, brawling ways and straighten up, then she’s got a line of promising suitors waiting. It’s never entirely clear what she sees in this lout, but his devotion to her is strong enough to light a fire under the young brute, setting him on a fateful path into politics.

The first step on that path leads him to the congressional intern program, where the movie suggests Cheney chose to join the GOP simply because he thought Donald Rumsfeld’s (Steve Carell) style was hilarious. Imagine for a moment having such a demented sense of humor that you thought Rummy was a riot? The unholy alliance between these two calculating schemers continued for decades, as they cut their fangs in the floundering Nixon and Ford administrations, worked the D.C. cocktail circuit during the Reagan years, amassed business fortunes, then returned as the grand old statesmen of the second Bush administration. Sam Rockwell’s Shrub doesn’t swagger into the film until halfway through — and doesn’t get nearly enough screen time — but he’s a delightfully charismatic counter to Bale’s sullen churlishness.

Since the lead himself is such a taciturn lump, Funny or Die co-founder McKay employs a wild, disjointed, fourth wall-breaking style to cut through all the wonky policy talk. If Michael Moore and Spinal Tap director Rob Reiner co-directed an episode of SNL, it may have looked a bit like this — with snarky subtitles, winking asides, and gimmicks that occasionally overreach. McKay pulled this technique off in The Big Short, his Academy Award-winning autopsy of the 2007 financial crisis, using tricks like having bombshell Margot Robbie explain the dry subprime mortgage crisis while taking a bubble bath. If at first that zany approach seems ill-suited to a story with such dire consequences, at least it helps cut through the acidity.

There is no illusion of balance here, and in fact Cheney is essentially blamed as the architect of all of our current political ills. McKay rubs our noses in all of the many sins of the W. Bush era, and there is no dispute that Cheney’s theory of “The Unitary Executive” expanded the president’s powers and allowed for abuses like warrantless wiretapping, falsified evidence for the invasion of Iraq, torture, etc. Once that Pandora’s box was opened, anything was possible.

The former Veep’s sole redeeming human quality is his love for his family; he stands by his gay younger daughter Mary (Alison Pill), though even that loyalty has its limits. An angry polemic, a deconstruction of biopic tropes, and a warning that those who seek power usually don’t deserve it, Vice is wickedly funny and sharp, and it respects Cheney’s cunning, even while loathing his actions.

As McKay sees it, not even the VP’s diseased heart can stand the guy, with the organ making repeated, desperate attempts to quit working — and finally getting its noble close up, as it sits gnarled and lifeless on an operating table, having finally won its long-sought escape.