Review: What it's like to eat at Ingham County Jail 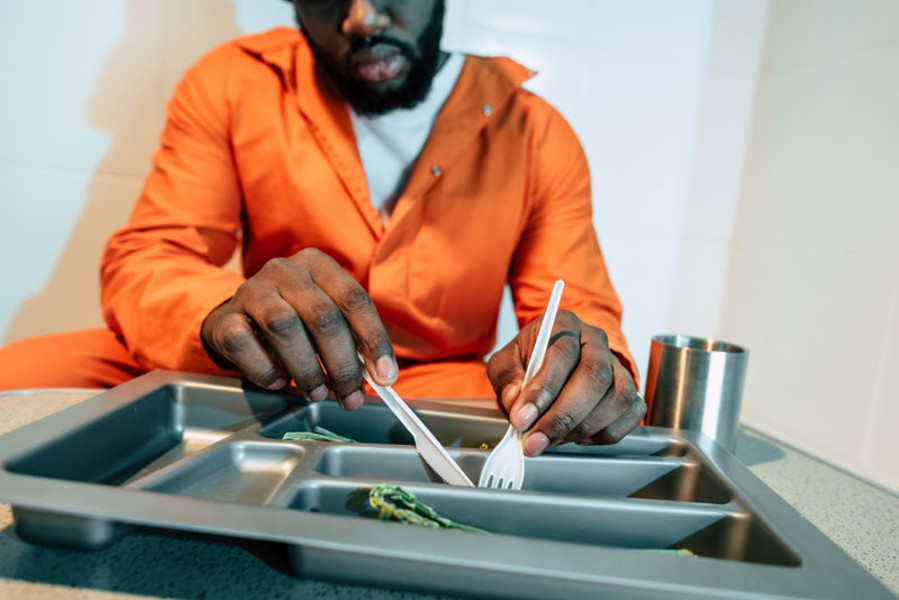 Shutterstock A dramatic re-enactment of what it’s like to eat at the Ingham County slammer.

Ready your appetites. With generous support from the Poor Peoples Campaign: A National Call for Moral Revival, and assistance from Judge Frank DeLucca of 54-A District Court, we sent our intrepid reporter Bill Wylie-Kellermann incognito into the Ingham County Jail for a 10-day excursion to sample its hostelry and cuisine. His report follows.

I always look to the clientele to gauge the authenticity of an eatery. A quick glance around Ingham County Jail reveals people of color disproportionately present. They clearly frequent the place, so I figure it must be the real deal.

The ambience blends a buffed institutional look with a casual lived-in air. At the back, a noisy game of spades is in progress. On a nearby stainless-steel table, a worn Zane Grey paperback lies open, half-read.

Comporting with the institutional style, the waitstaff (as well as the back of the house) are decked out in orange jumpsuits. I'm told they work for privileges. No tipping here!

A perusal of the menu says the place is made for vegetarians (or makes you one for the duration). Meat is only available on the somewhat pricey so-called "commissary" menu. In general, the secret ingredient of every meal is soy — aged and textured vegetable protein. A fellow diner speculated that the property of soy known to increase estrogen levels was a tactical culinary device to quiet the energies of the largely male guests. I was made wary, and sometimes pushed it to the side.

The fare is not for the gluten-conscious, but is a carb-lovers dream. Starch is a staple here: macaroni, spaghetti (generally over-cooked), white rice (with a gummy ingredient I couldn't discern), and potatoes (al dente) in white sauce, or perhaps wheat paste, all with plenteous black pepper. The chef liberally employs the latter to cover a multitude of sins, though in general there is a take-it-or-leave-it approach to minimalist spicing. Most meals include vegetables, fresh from a local freezer. They were always thawed, but with a serving temperature that made this diner wish for lukewarm.

Management has made a clear decision against presentation, or perhaps is reaching for something of the ironic. The dishes are served with a kind of slop-it-on quality that may not sit with all tastes. The compartmented trays are a nice touch. Portions are adequate, but to be honest I lost weight simply by not cleaning my plate.

Breakfast is served at 5:30 a.m. and eaten in silence as a rule. Guests repair quickly to blanket and bed thereafter, as the air conditioning, even mid-winter, is set far too high. Other meals are taken with conversation: jocular and obscene commentary on the day's fare. Table community quickly grows. A unique ritual accompanies each meal. Diners exchange food items either by free gift, trade, or in payment of a previous debt. This can be great fun, though it may leave first-time patrons a little nonplussed. Eventually, however, all catch on and join in.

By my lights, the best entrée was texturized vegetable protein in barbecue sauce. Spread it on white bread and if you close your eyes you can almost imagine the pulled pork sandwich from one of Detroit's famous destination eateries.

One plate came with a pile of plain TVP, a flour tortilla (not made in-house), a puddle of cheese sauce, and some rice. I think the chef was going for Tex-Mex. Overheard at a table nearby: "Remember. It's not about the taste. You have to eat to live."

Cornbread is standard with practically every meal. It's thick and moist, but sadly tasteless. Mixed in a plastic bag with powdered milk from breakfast, it does make a passable mush. I tried to send word through our server that split, fried in butter, and smothered in real maple syrup, it would make a truly winning side item.

I quickly learned to trust the wisdom and advice of the waitstaff. One day, handing a plate through the doorway, the server said under his breath to each diner, "Don't eat it." Kindly judicious. Except for the thawed vegetables and a nibble of cornbread, I didn't.

Prices are moderate, as it were, but a little hard to calculate. Under Michigan's "Pay to Stay" law, Ingham County charges prisoners $50 per day for their room and board, so meals are included. The jail contracts with a private company at about a dollar per meal, but out of that comes overhead, preparation, and profit. When not in use preparing jail meals, the company leases the kitchen in a side deal to cook for its other contracts. Moreover, the same company runs the supplementary "commissary" menu where coffee, tea, meat products, condiments, soup, chips (not to be sold individually), dessert options, and even fast-food items may be purchased at inflated, monopoly prices. The absence of those among the regular offerings may actually be designed to push guests (those who have the resources on account) onto the privatized menu.

As to a rating, I'd give the companionship of table camaraderie five stars. As for the food and the house, how low can you go?

Bill Wylie-Kellermann is a Methodist pastor recently retired from St Peter's Episcopal in Detroit. He served the 10 days in prison for a Poor Peoples Campaign direct action that occured last May when he and others blocked the doors and entered the Michigan Department of Health and Human Services in Lansing. It's director, Nick Lyons, is under indictment for his role in the cover-up of the Flint water crisis.

The Don Was Detroit All-Star Revue, El Club reopens with a bang, and other things to do in Detroit this week
Top Stories